How is it possible to create a worse movie than “Alone in the Dark?” Easy, dump out a piling heap of shit and title it Elektra. Now let’s be realistic. I knew the movie was going to be a waste of time and money. I watched this movie for two reasons. One, it was free. No way on God’s green earth would I have paid money to see this. Two, Jennifer Garner. She looks good. Period.

So let’s take a walk through what Hollywood calls a feature film. Wait a second . . . I can’t because the movie completely confused me. Half of the time the movie is a flashback. Bits and pieces of Elektra’s memory comes back to haunt her during damn near every scene of the movie. The problem is, the flashbacks don’t mean a fucking thing. They’re over abundant and 9/10 of them don’t give any answers to the internal struggle Elektra is fighting.

I’m also pissed off over the fact that Elektra doesn’t use Jennifer Garner’s main assets wisely. She is basically in her sexy red uniform once in the movie during the “climatic” ending. A Jennifer Garner movie requires flesh . . . and plenty of it. The girl on girl kiss that everyone talked about reminded me of kissing my grandmother when I was a little boy. No passion. Contrived and forced.

However, there was one bright spot. The idea of a villain whose tattoos can come to life and deal death to his marks. The graphics depicting this were quite good — a falcon morphing back into his body, a wolf erupting from his abdomen and snakes slithering off of his arms. Other than that, Elektra was as entertaining and fun as getting kicked repeatedly in the nut sack. 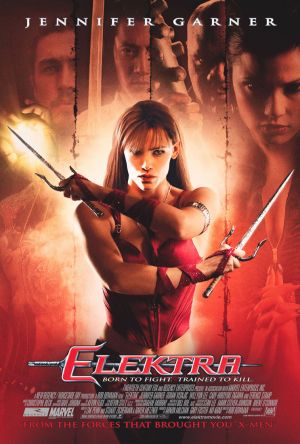