Finally! A movie that I was actually interested in seeing. Why? Three reasons really. One: The original, “Bad News Bears” is quite a good movie and I think a well done remake couldn’t hurt it. Two: Billy Bob Thornton. Three: Billy Bob Thornton . . . oh yeah, I said that one already.

The premise of Bad News Bears is masterpiece: A washed up, drunken loser (originally played by Walter Matthau and now by Thornton) is asked to coach a little league team comprised of misfits, juvenile delinquents and other oddballs. In the end, of course, the children and the coach both learn valuable life lessons, etc. It’s a good ‘ole feel good about yourself kind of movie.

So what’s my take on the remake? Well, it could have, should have been better. The movie falls short of the character development of the original. It almost pains me to say it, but Matthau, plays a more convincing, caring and — gasp — a more drunken Morris Buttermaker. This is not to say that Billy Bob plays the part poorly. Mr. Thornton is undeniably the best drunken asshole in our times (see “Bad Santa”). Another irritating facet of the movie was the attempt to reshoot nearly all the scenes of the original. From my standpoint, “Bad News Bears” didn’t need to just be shot again with new actors in it, it should have followed the original idea of the movie and been brought into the 21st century. Instead we have a few poor attempts at updating the picture in between a newly filmed original.

What you will find though, is the movie is funny. My wife and I found ourselves laughing out loud during several sequences. So long as it isn’t your kid, watching children curse up a storm is funny. And you’ll get a shitload of that here. And as previously said, you can’t go wrong having Thornton playing an obnoxious, drunk asshole.

My suggestion, would be to watch Bad News Bears. You will enjoy yourself, especially if you have children (although I wouldn’t recommend watching with your young ones). Next, I would suggest, renting the original movie. You’ll enjoy yourself watching this one too. Afterwards, compare. I think you’ll agree the original has a little something extra about it. 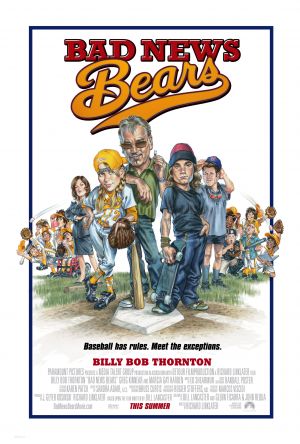