Let’s see, “Deuce Bigalow: Male Gigolo” was a mildly funny movie. So I expected Deuce Bigalow: European Gigolo to be a rehash of the first . . . same type of jokes, same premise, etc. Guess what? I was right.

Plain and simple Deuce Bigalow: European Gigolo just isn’t that funny this time around. The man-whore, mangina, he-bitch talk gets old quick. It’s basically all T. J. Hicks (played by Eddie Griffin) says. And the women Deuce meets are the same tough luck type of crowd he met in the first film. Instead of a girl with a fake leg, a woman who curses all the time or a big fat black lady, Deuce hooks up with a chick with a dick for a nose, a broad with a tracheotomy and some filthy bitch. How original!

There are however maybe two or three parts of Deuce Bigalow: European Gigolo that are funny. Norm Macdonald plays a crazy Scottish gigolo who says some funny shit (if you can understand him!). Every once in a while Eddie Griffin is given a funny line to say too. It’s rare, but it does happen. Lastly, Deuce’s love interest is easy on the eyes. I mistook her for Heidi Klum . . .

So to make a long story short, see the original. The jokes are so much fresher and you’ll laugh a whole lot more. 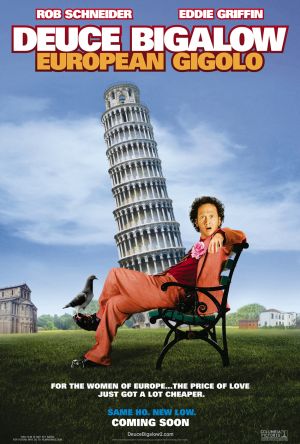