We’ve all seen the advertisements of the The Skeleton Key telling would-be movie watchers that ‘this movie is as good as “The Sixth Sense”‘ and asking people to not ‘spoil the ending.’ So, as most of mindless America, I bit the hook and and let them reel me in.

In a nutshell the movie casts Kate Hudson as a hospice nurse who goes to backwoods Louisiana to take care of a man who has recently had a stroke. During her stay, she becomes aware of some strange voodoo type shit happening and all hell breaks loose . . . of course.

The movie has a few good things going for it. Kate Hudson, is indeed pleasing on the eyes. There are plenty of scenes with her in wet t-shirts and little nighties. They needed to do that to offset her acting, which is just plain boring. The plot of the movie isn’t so bad either. I wouldn’t call The Skeleton Key a psychological thriller, but the movie does try to keep the viewer guessing as to what is going on and what is going to happen. For the most part it succeeds and the ending does indeed cause a bit of an “A-HA” moment.

Mostly, however, the movie runs on the fumes of most B-level horror movies. Just add in lots of dark scenes, add a pinch of thunderstorms and touch of the occult and — voila! — you’ve just created a scary movie. The problem is the scares and/or moments of heightened awareness are few and far between. There are also quite literally a dozen times, I said to my wife, “Why doesn’t this girl just leave the fucking place?” Movies like that just totally baffle me.

So, the question of the hour is, “Should you shell out the cash, you now need to pay for gas, on this movie?” In a word “No.” The ending of The Skeleton Key will surprise most individuals, but it just isn’t enough to make one want to see the whole thing. Wait for the DVD or give me a call and I’ll tell you what happens. 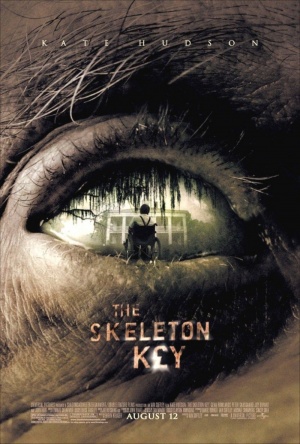