I don’t even know what to say. Or why to bother. To stare into the void that is Disney’s soul-sucked remake of its cinematic safari The Lion King is to come face to face with a profound and overwhelming sense of meaninglessness. It’s the same movie they released in 1994, only worse in all ways and sold at 2019 ticket prices. It’s the absolute epitome of everything Disney has been criticized for of late, a risk-averse cash grab designed to regurgitate an old hit in the name of cheap nostalgia.

But unlike other recent remakes that pilfer from the studio’s cartoon catalog, such as the soft-hearted “Cinderella” and surprisingly charming “Aladdin,” The Lion King affords no room for generous praise. This is as simperingly safe as anything the studio has ever done. No exaggeration. This is the peak right here. No other theatrically released Disney movie is as creatively bankrupt and woefully worthless as this one.

Quite literally, the only attempt to add anything to the frustratingly familiar experience arrives in the form of a fart gag and another fart gag, followed by one more fart gag. Just try to wrap your head around that. The most powerful movie studio in the world just sold you a nearly shot-for-shot remake of a movie that could easily use a bit of narrative tinkering here and there, only to break wind in your face a few times.

Other than that, this is just the same sequences, same lines, same jokes, same images, same music cues, same emotional beats, only with the original’s occasional eccentricities excised in favor of bland blather. Musical numbers lack color (“Can’t Wait to Be King”), flavor (“Be Prepared”), or even the proper time of day (“Can You Feel the Love Tonight?”), but they’re all there and all inferior. The characters are mostly the same, except every performance serves only to highlight how much better the original cast was. Even returnee James Earl Jones is worse this time around!

Jeremy Irons’ velvety drawl is most missed whenever villain Scar appears on screen, but the absence of Nathan Lane, Ernie Sabella, Whoopi Goldberg, Cheech Marin, Jim Cummings, and Matthew Broderick leaves a cavernous hole. Jeff Nathanson’s corpse of a script seems to recognize the role each character played in the original movie, but it becomes hopelessly lost the moment it steps a mere inch outside the strict boundaries of the 1994 pic’s template.

So, the hungry hyenas that were such riotous comic relief in the original movie are still comic relief now, only they’re extremely unfunny and dull since the obsessively photorealistic approach to the characters so significantly cuts down on their potential for silliness. They’re meant to be more menacing instead, but as with everything and everyone else, this new take results in pure boredom.

Other attempts at humor fall short too. Robbed of his more theatrical showman personality, Timon (now voiced by Billy Eichner, “Most Likely to Murder”) is an irritant spouting the same lines that Lane made sing in the original. His sidekick, the wiry warthog named Pumbaa (voiced by Seth Rogen, “Long Shot”), is responsible for the aforementioned farting, so you can imagine how I feel about this new version. But the issue runs much deeper because there’s a jovial innocence to Sabella’s original voice recording that Rogen can’t capture and the difference is especially jarring when the character is so clearly supposed to flatulently follow in the footsteps of his animated ancestor.

This problem extends across the whole project. Everything contained within the movie’s frames is kept on such a short leash that there’s no opportunity to explore any new territory beyond a quick throwaway line or two, which clashes with the charmless casting. Insisting that the movie adhere so closely to the original, scene by scene, shot by shot, can only work if the new voice actors are up to the task.

Casting is usually director Jon Favreau’s strongest suit, but here he just painfully reaffirms how good the 1994 cast was and how little room they left for improvement. Photorealistic animated animals also have a lot less inherent personality than their more stylized counterparts, so there’s a gap in the fantasy that has a peculiarly deadening effect. Perhaps that explains the stifling stench stretching across this CGI savanna. And no, that’s not a fart joke.

It would seem like an updated, longer version of “The Lion King” could address how rushed the hero’s journey is in the original movie, wherein cub-turned-king Simba (Donald Glover, “Solo: A Star Wars Story,” in the new movie’s back half) is exiled from his pride, makes new friends in some jungle oasis, ages into an adult lion, and comes to terms with his tragic past all in a matter of mere minutes and mainly with the help of one montage-inspiring song. But when you’re crafting a carbon copy, you obviously bring the original’s flaws along for the ride.

Perhaps none of this matters. Disney already owns most of Hollywood by now and they’ll keep carving out the safest path to continue their dominance. “The Lion King” has long been one of the studio’s most popular titles, so the thought process is understandable from their perspective. Why mess with a good thing? Keep it all as Lion King-y as possible and the worst-case scenario is that fans don’t like it as much as the original. Big deal.

I offer a shrug of indifference then. We’re all just pawns in Disney’s bid for a media monopoly, sipping our sodas like morons as the ghost of Walt digs into our pockets for spare change. This is nothing new, of course. It’s something quite old, really. Disney has been very good at what they do for a long time and the past several years have been an especially towering high point for the studio.

Oftentimes, the House of the Mouse produces quality movies that are impressively cognizant of the company’s history and legacy. It is here that the roar of The Lion King is so empty, though. This is as straightforward and simplistic a plan to strike box office gold as any ever devised. It is never anything more than a glorified re-release fancily packaged to be freshly stuffed down audiences’ throats. It’s an invitation to waste two hours and get angry afterwards. Thanks a lot, Disney. In what could be a brilliant bit of cross-promotion, I can practically hear Dwayne Johnson’s delightful demi-god character from “Moana,” one of the company’s best movies this decade, calling out across the cinematic abyss: “You’re welcome!” 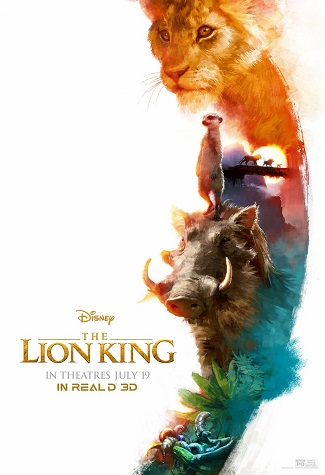