In case you didn’t know it — Kenneth Branagh is a director who really grasps the magic of the screen. Whether it’s through Shakespearean adaptations like “Much Ado About Nothing” and “Hamlet,” or one of the larger tent-poles like “Thor” and “Jack Ryan: Shadow Recruit,” viewers can be sure of one thing: They’re in for a good time. His directorial touch is pronounced, his characters are always lively and dressed befittingly, and they’re framed and captured from generous angles.

With that in mind, his newest film, Cinderella, retains all of those attributes. Branagh enlivens the story, solidifies our perception of a handful of characters (while pronouncing the perception for others) and marks nearly every scene — with the help from his long-time collaborator, Haris Zambarloukos — with luminous watercolors. The kingdom they conjure up is so romantic that every child will surely carry vivid images of it with them for years.

It’s best to note, however, like most recent fairy tale productions of late (“Jack The Giant Slayer,” “Hansel & Gretel: Witch Hunters,” “Snow White and the Huntsman”), there are some updates to the Cinderella folk lore and the iconic 1950 animated feature that we’ve all grown to accept as truth (it’s tame compared to the aforementioned titles, though). Cinderella is still the unjustly oppressed girl she was, but now an intricate plot threatens her outcome and wider attention is given to and a backstory developed for the evil stepmother, Lady Tremaine (Cate Blanchett, “The Monuments Men”), offering an explanation as to why she is so austere (similar to but not quite to the level of “Maleficent”).

Blanchett delights in this expanded role as much as screenwriter Chris Weitz was apparently delighted in penning it. She is appropriately cunning and cruel as a woman who desperately wants her and her vapid daughters (Sophie McShera and Holliday Grainger) to remain affixed to the top of the list of snooty aristocrats. Likewise, although in a criminally small part, Helena Bonham Carter (“The Lone Ranger”) absolutely chews through her lines as the Fairy Godmother. She is sarcastic, witty and bubbly — all the best characteristics of a wand-wielding fairy.

Lily James (“Wrath of the Titans”) as Ella, too, is up to the task. She begins the picture living a picturesque life on the countryside of a small kingdom (where everyone has British accents). She has loving parents and savors her bonds with the animals on the property. But all that changes when her mother passes away and her dad (Ben Chaplin, “War Book”) desperate to give Cinderella a woman’s touch takes on a new wife. Soon things go from bad to worse when he dies and Lady Tremaine and her brainless, but vicious daughters take over the estate, relegating Ella (now dubbed Cinder-Ella because she cleans the fireplace cinders) to a second-class citizen in her own house.

“Remain kind,” her mother tells her before dying and that’s what Cinderella does although her extended family give her little reason to. And as the story goes, she ultimately encounters The Prince, known as “Kit” Charming (Richard Madden, “Chatroom”) while in the woods and they fall madly in love only to be denied by The King (Derek Jacobi, “My Week with Marilyn”) and The Grand Duke (Stellan Skarsgård, “Thor: The Dark World”). A ball is held, a conspiracy is uncovered, a famous glass slipper is placed upon a foot and the rest, as they say, is history.

All this, while good, however, is secondary to the grandiose production of the film. Set design, costume design, makeup, practical effects are all front and center in bringing the magic to life. Sandy Powell does a splendid job dressing Blanchett and James in wonderful outfits, the sets constructed by Dante Ferretti are intricately detailed, Patrick Doyle’s musical accompaniment is notable and the pumpkin-to-carriage transformation (among others) is a delight to watch.

Although Cinderella is a bit out of my realm, I firmly believe that it is destined to be another Disney classic. The Prince says at one point: “I have to see her again.” It’s true; Cinderella is a great way to see her again and reconnect to this timeless story that encourages hope and forgiveness and kindness. It’s also a great way to expose youngsters to these traits, perhaps for the first time. 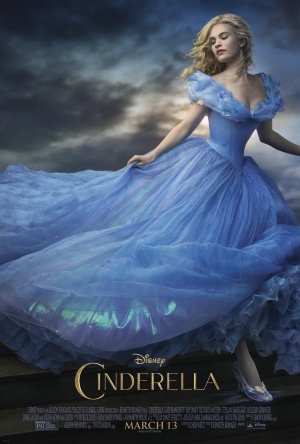