When distilled down to its basest elements, con drama Focus is a light and airy attempt to hearken back to the days of movie star vehicles that require nothing more than mega movie star wattage and a smooth smile to keep their exploits afloat. Even when viewed at surface level, there’s nothing more to the movie than that. It’s fluff from top to bottom. But it’s a brand of tasty fluff that writers/directors John Requa and Glenn Ficarra prove very good at handling. They command the camera with cool confidence, as if they’re calmly drifting in the wake of Will Smith’s oozing charm.

Slick shots and crisp edits are on full display here as Smith looks to remind us why he was once the biggest movie star on the planet. After some flops and a limp bid at nostalgia with a late and unnecessary “Men in Black 3,” Smith has spent the last few years with his career as close to the dumps as the star has come since first striking gold in his early 90s TV days. But now he’s back with a performance that may not be deep, but is certainly powered by an engine of charisma that is uniquely his own.

Here he plays Nicky, a con artist who manages a ring of small-time criminals who can rack up a million dollars in a few days of preying on unsuspecting tourists. Expertly executed pickpocket tricks are the highlight of one sequence where the team works together to pilfer wallets and watches from revellers on a busy New Orleans street. The various moves are casually convincing, as they should be considering one of the top credits at the end of the pic goes to a pickpocket adviser.

Requa and Ficarra keep the whole movie in such nimble territory that the morality of the situation never feels particularly important. People are getting ripped off and we’re never convinced that the pickpocketers are more than total jerks for doing so, but it’s tough to be bothered one way or another when the movie is so busy shedding all dramatic weight.

Focus isn’t about ripping people off anyways, but rather how awesome one must look and act to be able to rip someone off. The plot involves a teacher/student relationship between Nicky and resourceful bombshell Jess (a delightful Margot Robbie, “The Wolf of Wall Street”), which allows us to be privy to plenty of lectures on the ins and outs of the complicated con game. The script keeps trying to push Nicky and Jess into some sort of romantic entanglement, wherein the movie hides many of its twists, but a lack of sexual chemistry between the two very good-looking leads stalls any progress there.

Still, what Smith and Robbie lack in spark together, they make up for with a buzzing platonic charm that makes them work as an onscreen pair better than that lack of romantic chemistry should ever be able to allow. Robbie is effortless here and she can more than hold her own against a mega-star like Smith. Likewise, Smith is very much in his element here, playing it cool and managing to make all that tight, coiled energy of his seem inviting instead of alienating, especially important considering Nicky is a pretty cold, heartless guy.

That’s where all the old-fashioned movie star charisma comes most importantly into play. We have to like Nicky, or at least admire him, so we don’t get bogged down in hating the guy. An emotional investment isn’t particularly necessary and Requa and Ficarra clearly have no desire to dig deep enough to locate any pocket of dramatic resonance. Charm will have to do instead. Well, that and a bunch of plot twists.

Misdirection and redirection are major elements in a con movie, of course, so much of the fun here comes from trying to guess who’s doing the playing and who’s getting played. Nicky and Jess have an on-again/off-again relationship that frees up the plot to jump ahead in time and place, only to reconnect the characters as conveniently as before.

The introduction of a storyline that centers around competition among Formula 1 racing teams and some fancy software is just an excuse to muddy the waters of perception further, but the lavish world of Buenos Aries parties and big money being tossed around fits the movie’s slick style. And Requa and Ficarra know how to add little dashes of extra flavor to spice up a scene, such as when Nicky meets with a client on the sidelines of a racetrack and the open-wheel cars roar by throughout the conversation, ambient noise cranked up to ear-ringing decibels.

A scene like that one easily encapsulates what Focus is all about. It’s loud and flashy and timed just well enough to keep us guessing. As the twists start piling up, things get sillier and obviously a whole lot of things have to go exactly right for Nicky and Jess’s plans to move forward to the next stage of the con. But Requa and Ficarra have manufactured the surprises with the knowledge that we’ll question all of it, so they at least provide backup explanations for everything and aren’t afraid to pull us in one direction far enough that the twist is hard to spot on the other end.

For a flighty throwback to the days of star vehicles relying on little more than the star, Focus is a welcome jaunt. It’s great to see veteran Smith engaged and nearly newcomer Robbie further proving she’s a rising talent to watch. And Requa and Ficarra show plenty of promise as they gingerly step just inches beyond the borders of the more comedic work they’ve done in the past. This is hardly brand new territory for any of the key players here, but it still feels more fresh than stale. Of course, it doesn’t feel like much of anything overall. The movie’s touch is ever feather light and there’s nothing significant to really hold on to here. So let it float away, a trifle that’s fun in the moment, then poof! Gone an instant later, possibly with your wallet. 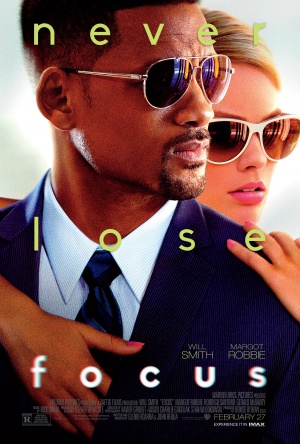