Sometimes blood ties are strong enough to reunite estranged relatives living at opposite sides of the world. ‘Blood calls’, we often hear from close and distant kin. And we can easily attribute such call to the fact that we all have a past and, behind such past, there is almost always a family. However, sometimes these are the very ties that end up strangling our bloodstream. And we feel like fleeing, like leaving our past behind just to never come back — till we forget to remember. Yet, there are rare occasions in which it is oneself who had strangled the blood out of our lineages — and we’re bound to remember . . . in exile.

Adam could be situated in this latter cluster. He’s a nomadic laborer toiling till time runs out and he’s able to get to drink and show off passages of the past he allows himself to remember to old folks at local pubs. What we meet from the very beginning is an isolated man at the midst of an alienated environment. Yet his isolation is not due to a conscious effort; it is not out of rebellion against such alienation but out of sheer inadequacy. What we see is a man who belongs nowhere but who can make himself comfortable almost anywhere he goes.

There couldn’t be a better template for the central character of a road movie, which is what Blood Cells is. Adam appears almost as an Aki Kaurismäki-like hero, a man who in his failures finds his redemption (I’m thinking specifically of Kaurismäki’s “The Man Without a Past”). When Adam receives a call from his brother, Aidan, asking him to visit them home to be at the birth of his first child, Adam’s frail stability starts to falter. Without warranting the end of his exile to his brother, Adam embarks on a journey across the outskirts of Britain (some call it broken) only to revisit different modalities of the trail he’d left behind and to find that even though no one has really forgotten him, they’re better off without him — a finding that is more of a confirmation than a discovery for Adam.

Adam’s exile, we see at the beginning of the film (a most enticing six minute sequence in which not a single word is uttered), has something to do with the destruction of his father’s farm, likely because of the foot-and-mouth disease outbreak that so seriously affected thousands of British farmers at the beginning of the present century. We watch Adam’s father burning all his livestock with a sour mix of despair and resignation. The evolution of this recurrent memory will be the thread through which Adam weaves his way back to some undecided place that inevitably takes him closer to home.

British directors, Joseph Bull and Luke Seomore, have created an atmosphere to perfectly match their main character. By way of the sober and diaphanous cinematography of David Procter, Adam travels through landscapes that often look more like landfills — but hypnotically alluring at that. The Britain that we see is not the nearly costumbrist-clichéd-greyed (or overcompensatingly saturated) that British films have gotten us so used to see. The one we look at is beautifully post-apocalyptic. And it is in this environment that Adam envisages his road back to redemption — if so he chooses.

The cell wherein Adam has caged himself is the same in which he has locked his secret down. But cells, like secrets, are most resilient organisms — and blood is no exception. One of the greatest wonders of life is that it replicates itself; at its core, it is a self-producing, self-creating organism, an autopoietic system upon which life replicates life. Yet that’s not the case when life is faced with self-destruction, when bloodstreams are enclosed and choked to death, when oxygen is taken away and all defenses are contravened — when, out of esteem, the stem cells of our ancestors are put to die. In this case, those self-replicating cells turn into self-defeating organisms, which is what clearly populate Adam’s mind. A clear infection.

As Blood Cells moves by, we understand that such self-defeating cells inside Adam’s mind have to do with some defective poietic platelets that would not let him heal the wounds of his past. We know that there is a medical definition for internal bleeding, but what we see in Adam is, without a doubt, a more appropriate illustration. We might call it “inside bleeding,” and then we can save us the argument with the medical community. What we have here is a hemophilic heart that results in a cellulitic soul. Should things continue this way, the patient will certainly develop a necroptic spirit inside which nothing will last. Amputation has certainly not worked for Adam, for no matter how much he cuts his past still haunts him. And this is his greatest failure — but also his only way out.

Blood Cells harbors within both the best qualities and the main flaws of most outstanding debut features. The visceral vigor and the endless energy imprinted in each and every frame is undeniable, which make for most memorable images (special attention should be granted to the beautifully framed climax and the close up of Adam’s profile adorned with a saint-like halo, compliment of a large storehouse’s stained glass). Yet there are also inconsistent metaphors (such as the role that the stars end up playing in a movie wherein the sky looks like the resigned repository of a wasteland) and an indecisive camera that insistently goes from steady to stillness without any clue as to which is framing what or, more importantly, who and why. And yes, there is sometimes a shot too many or sometimes a shot too short, but here’s an artistic sensitivity (or two) at work that is worth watching. This film is a very well-developed character study.

And special mention should be allotted to this film’s central figure, Barry Ward, an experienced and attention-grabbing actor who’s better known for his impeccable work in Ken Loach’s latest feature, “Jimmy’s Hall.” With stupendous improvisational skills, Ward’s portrayal of Adam is as honest as it is daring. He goes into the darkest depths of a man doomed by a rapid sense of mercy that though thoughtless seems well-meaning. It is the resentment that sits beside his kindness, however, what makes Ward’s work all the more remarkable. In the ambiguity that he continuously distills we enter the innards of failure just to understand it for all it’s worth.

But besides broken blood ties, the road in Blood Cells winds up showing us another meaning (a less conservative one) of what is a “broken Britain,” for here is an island that has been bathed by bloodshed over bloodshed, all spilled in the name of a handful of bloodlines. The genre thus adds another dimension to the character, and the character, in turn, adds another dimension to his pathway.

And yet, just as happens with history, life-stories are tied to their bloodlines — and there are always new beginnings to look forward to. The rebirth of one’s blood in another being begins another life, a descendant that can be welcomed as a vessel of hope, carrying new life from plot to plot. 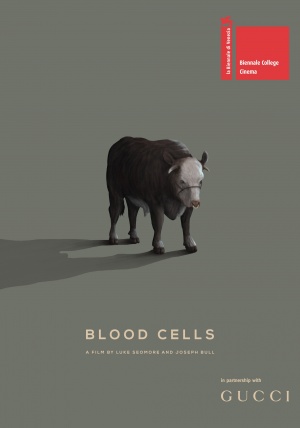