In 1933, Jimmy Gralton (Barry Ward, “Blood Cells”) became the only Irish citizen ever to have been deported from Ireland when he was exiled to America without a trial. His crime seems to be that he was a Communist who incurred the ire of the Catholic Church and the landlords by daring to establish a dance hall where such sinful pleasures as community dances, singing lessons, poetry readings, boxing lessons, and political debates took place. Written by Paul Laverty (“The Wind That Shakes the Barley”) from a play by Donal O’Kelly, Ken Loach’s (“The Angels’ Share”) Jimmy’s Hall directs our attention to a not very well known incident in Irish history that followed the Civil War of 1922-23, a war waged between two groups of Irish republicans over the Anglo-Irish Treaty.

Partially filmed in the village of Drumsna, a village only a few kilometers from Gralton’s birthplace in Effrinagh, the film begins in 1932 with Jimmy’s return to County Leitrim after having lived in New York for ten years. After showing historical footage of New York during the 1930s, particularly its poverty and unemployment during the great depression, we learn that Jimmy’s brother has recently died and he is coming home to support his mother (Aileen Henry) in running the family farm. In a flashback to ten years ago, Jimmy is shown pleading with his then girlfriend Oonagh (Simone Kirby, “Season of the Witch”) to go to New York with him, but she prefers to remain in Ireland. When he returns, he finds her married with two children, though they obviously still have feelings for each other. When he responds, “Same as ever” to her question about how he is, she tells him that, “Nobody’s the same after ten years away.”

Now named after Patrick Pearse and James Connolly, two martyrs of the 1916 Easter uprising against British rule, Jimmy restores the boarded-up community hall that had been closed by the Catholic Church ten years earlier, stocking it with a wind-up Victrola and jazz records he brought from New York. Once again, the hall becomes a gathering place for workers and farmers and a thorn in the side of the Church. Dances are picketed and classes disrupted, but Jimmy refuses to bend. Fearful of stoking community activism, Father Sheridan (Jim Norton, “Extremely Loud and Incredibly Close”) stirs up his congregation by playing the Communist card and by warning his flock about the debasement of the country’s morals.

“What is this obsession with pleasure?!” he demands, and asks, “Is it Christ, or is it Gralton?” Railing against “the Los Angelization of our culture,” the fearful pastor says that the hall has become a place where “the sins of jazz music and the rhythms from darkest Africa with pelvic thrusts may poison the minds,” and reads aloud the names of those who went to the hall the previous night. Fortunately for Gralton, neither Karl Marx nor Joseph Stalin could make it. Repercussions do not take long to occur. IRA activist Commander Dennis O’Keefe (Brían F. O’Byrne, “Before the Devil Knows You’re Dead”) is shown whipping his daughter because hers was one of the names read aloud, shots are fired into the hall during a dance, and the hall is set on fire and burned to the ground on Christmas Eve, 1932.

The best scenes in the film are Gralton’s one-on-one conversations with Father Sheridan in which he reflects on the father’s outward display of hatred towards those who are working towards the common good, defying Christ’s message to love thy neighbor. While Sheridan is undoubtedly the villain, the intimate talks with Gralton ultimately make a dent in his intransigence and he tells his friends that Jimmy has more courage than any of them and should be treated with respect. Though his hint of transformation is aided by a young priest, Father Seamus (Andrew Scott, “Locke”), it is too little and too late to make a difference to Jimmy who is arrested and, deported to America where he will live out the rest of his life.

Jimmy’s Hall, like all of Loach’s work, has its heart in the right place. It is well acted and filled with enchanting Irish folk music and high spirits, yet in sacrificing subtlety and nuance to score political points, it fails to come alive with real passion. The film does have an important message that is relevant to us in the present day where the concentration of wealth in a small percentage of the population threatens our democratic heritage, yet the characters are more cuddly than fiery, more one-dimensional symbols than fully realized human beings. In spite of the timeliness of the subject matter, Jimmy’s Hall does not stir the blood. 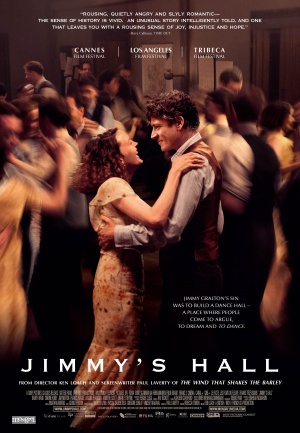