The end of a relationship is chronicled convincingly and compellingly in Danish filmmaker Kristian Håskjold’s short Forever Now. It begins with the start of a breakup and ends with, well, the end of the breakup, so there are few plot-based surprises in its compact running time that barely exceeds 15 minutes. Instead, Håskjold is content to simply play observer while trying to navigate the tricky space between establishing the parameters of the breakup and providing the audience with enough understanding of what is being lost to actually care about the proceedings.

To aid in this endeavor, Håskjold predictably resorts to flashbacks (shot in nostalgic sepia tones, no less) to show us the good times between Cecilie (Frederikke Dahl Hansen, “Copenhagen”) and William (Ferdinand Falsen Hiis, “One Night in Oslo”) in the past as they fall apart in the present, but while the approach isn’t exactly new or novel, it works well because the actors sell it all from each high to every low. The cast is truly the key ingredient here, especially because Hansen and Hiis are the only two with speaking parts in the film and mainly share the screen with no one but each other.

Whatever emotional traction the movie gains is due to their performances and their chemistry. Cecilie and William still seem like a couple in love or at least one that could potentially work through their problems, so it’s a more interesting and engaging conflict than if this was an ugly breakup full of screaming matches and airborne tableware. The flashbacks and the discussion in the present offer glimpses of where the relationship went wrong, but the focus here is less on specifics than it is on intangible emotions.

Cecilie and William decide to make the most of their final night together and that’s where Håskjold does the majority of his observing, watching two people experiment with the drug MDMA, dance and lie around an apartment that will soon be no longer a home to both of them. There aren’t any particularly eye-opening insights about relationships or any twists and turns in the plot to upend our expectations. It’s just two people popping onscreen, inviting us to witness an intimate part of their lives.

Hansen and Hiis make it believable from top to bottom, so while Forever Now seems somewhat simple and slight in the end, it at least feels honest and authentic, a fair look at the complexities of relationships and a testament to the power of poignant performances. 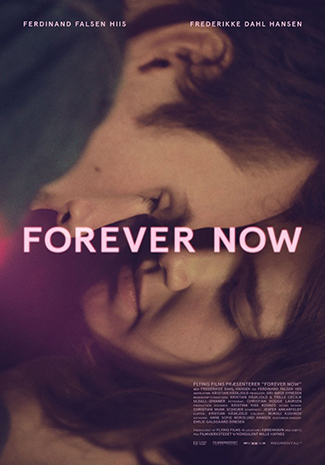