The camera loves Sam Elliott, and why not? He has a tall, lean body with thick gray, unruly hair hanging over a furrowed brow, a trademark horseshoe mustache to go along with dark chest hair; it all blends so well with the unforgettable masculinity in his deep, golden voice that seems to descend directly from the gods.

At the beginning of The Hero we see him using that voice recording a commercial for BBQ sauce.

The Hero is an insightful and thoughtful exposé of an iconic Western actor named Lee Hayden (Elliott, “Did You Hear About the Morgans?”), a popular actor known mostly for one-role, now past seventy and diagnosed with pancreatic cancer. Not getting any movie work from his agent, he’s stuck doing commercials, and lives with his memories telling everyone a made-up story about doing that one last Western.

Why bother with a movie? His voice makes him plenty of money doing commercials. Besides, who wants to see a gray-haired geezer play with his six-shooter? Well, a man has his pride and dignity to maintain, so he keeps repeating his made-up story. Meanwhile, he doesn’t tell anyone about his diagnosis, not his ex-wife Valarie, played by Elliott’s real-life spouse Katharine Ross (“Slip, Tumble & Slide”), nor his twenty-something daughter Lucy (Krysten Ritter, “Big Eyes”) or his new girlfriend Charlotte (Laura Prepon, “The Girl on the Train”) who scares him because he really likes her, even though she is half his age; she really likes him too, though, and they have a good relationship.

Well, at least she’s older than his daughter, he rationalizes.

He deals with all this anxiety in the most honest and believable way he can, by smoking more marijuana (provided by Nick Offerman, “The Founder”) and increasing his daily dose of bourbon.

Elliott is in almost every frame of The Hero, and with his moody, nearing-the-end resignation about life his acting stands out as one of the best performances of his career. Director Brett Haley directed Elliott before in another senior-citizen themed film, “I’ll See You in my Dreams” with Blythe Danner. He was mainly eye-candy for the AARP females in that one, and here, although there is much more to his character, Haley again uses Elliott as the object of the female gaze: His camera lingers over every part of Lee. To show his vulnerable side, in a funny and touching scene Charlotte, who is a stand-up comedian, uses her experience with Lee as the basis for a comic routine joking about the private parts of older men. Lee, in the audience to give her some support, is so embarrassed he has to leave the building. He can’t figure what to make of Charlotte. He definitely wants to keep this beguiling woman in his life . . . but how?

Don’t expect a typical May-December salacious stereotype, however. The script, written by Haley and Marc Basch, goes deeper. Charlotte and Lee spend most of their time talking and figuring things out. Prepon and Elliott have such an honest chemistry they are a pleasure to watch. Prepon shows that her character is enjoying her time with Lee and as their relationship gradually grows and unfolds, you’ll find that The Hero is not a sad, feel sorry for the old-guy story; it’s a small snippet-of-life about people dealing the best they can with what life has thrown their way. 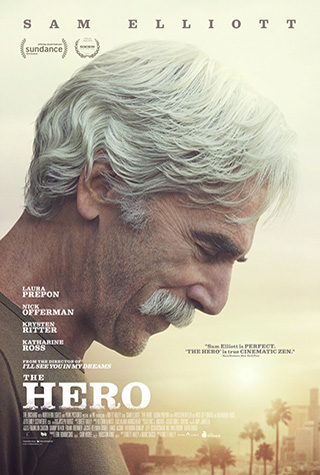