I’ll start my review for Wonderstruck like this: If Wonderstruck doesn’t get a nomination for best picture this year then something is horribly wrong. It’s hard to imagine — and I haven’t yet seen — another 2017 film that equals or tops it.

Todd Haynes, a director known for bringing queer cinema to the mainstream with films like “Far From Heaven” and “Carol,” switches gears here bringing Brian Selznick’s young adult novel “Wonderstruck” to the screen with an intoxicating mix of cinematic styles that make for heady viewing. It’s the story of two deaf 12-year-olds, Ben (Oakes Fegley, “Pete’s Dragon”) who lost his hearing due to a lightning strike and Rose, who has been deaf all her life (Millicent Simmonds, actually deaf), and their coming-of-age journey as they travel through New York City in two separate timelines: 1977 and 1927.

Ben, in Gunflint, Minnesota has never known his father, so when his mother (Michelle Williams, “Oz the Great and Powerful”) dies in a car accident and he is left alone, he finds an old bookmark that’s from a bookstore in New York that was left in the attic by his father and decides to head out on his own by Greyhound bus to find this bookstore and possibly the identity of his dad. It’s 1977 and Haynes shows us the streets of Manhattan teeming with funk, jazz and addicts, making Ben feel like he fell into a nightmare. It’s a wonderful, metaphorical sequence as Haynes holds strictly to Ben’s point of view; all he can see are people’s backs and shoes, unable to see over their heads for street signs so he can find out where he is going; he’s scrambling around and can’t see the forest for the trees. We sense Ben’s confusion and fear about taking this journey.

Meanwhile, Haynes intercuts Ben’s story, incidentally told with sound and in color, with Rose’s story from 1927, told in black and white and without sound, like a silent film. Rose has found a news clipping of her favorite movie-star, Lillian Mayhew (Julianne Moore, “Kingsman: The Golden Circle”), who is in town rehearsing for a play on Broadway. She takes the ferry from Hoboken to the city to escape her overly strict father and meet her favorite silent-screen star in person.

The experience of these silent-film sections casts a spell that not only takes us back into the aesthetics of silent films: The hustling, zigzagging cars in the crush of traffic, as pedestrians try to cross the street wherever they can, but cinematographer Edward Lachman goes further, pulling us into the era, his images cast the spell of what it’s like to be a deaf child journeying through the city.

The finale of Wonderstruck is a trippy maze of interconnections between both kids that ends up with a beautiful sequence in the back-rooms of a museum where both Rose’s brother and Ben’s father used to work. There’s a breathtaking diorama of New York City on display that satisfyingly wraps up the story of two children journeying into the wonder of the world. A journey we are privileged to take with them.

'Movie Review: Wonderstruck (2017)' has no comments 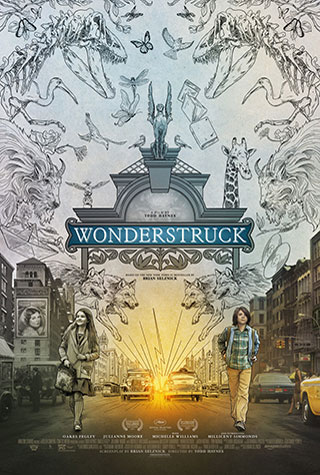