One per-centers are taking it on the chin at the movies these days with recent releases like “The Founder” and “Get Out,” and now the latest cinematic smack out of Sundance, Beatriz at Dinner, a sly and telling exposé of class in America as seen through the eyes of a Mexican immigrant woman named Beatriz (Salma Hayek, “Savages”), a new-age holistic healer who works at a cancer rehabilitation center, does private massage therapy on the side, lives with her pet goats and drives a broken-down Volkswagen.

The theme these films have in common is how the hard-edged, almost psychopathic greed and narcissism of the extremely wealthy stops at nothing when it comes to raking in the dough, while the reality of hurting people — emotionally and financially — along with destroying the environment, doesn’t seem to touch their consciousness.

In “The Founder” Ray Kroch steals the McDonald’s name from the two McDonald brothers and trademarks it so they can’t use their own name, and he just goes on to build his empire. The upper class whites in “Get Out,” who use their stature to steal the bodies of the lower class, think they’re liberal and unbiased when they tell the black servants, “we’d vote for Obama for a third term.” In Beatriz at Dinner the real estate tycoon, Doug (John Lithgow, “The Accountant”) brags at how he buys the property before deciding what to do with it, so the people living there can’t object when he throws them out, because it’s his land.

Such thinking shows why most of us aren’t rich because those who have a conscious balk at this kind of cruelty. So when Beatriz is dining with a group of “richies” and brings up such matters for conversation, the eye-rolling starts in earnest. “She has goats,” they whisper. And while the diners are in sleek cocktail dresses and suits, Beatriz is in jeans and a work shirt, struggling to fit some words about goodness and healing into the Darwinian capitalist conversation. (Beatriz only finds herself at such a dinner because she was invited last minute by Cathy [Connie Britton, “American Ultra”] after performing Cathy’s massage and suffering from another car breakdown as she tried to leave).

Screenwriter Mike White doesn’t portray these capitalists as monsters, however, they are real people just being who they are and what they know. Not stereotypes, they think they’re good people doing the right thing. To us and Beatriz, they’re comically naïve about their effect on others and the world. Beatriz, at times, drifts away from the table to escape, roaming the hallways of the huge house like a ghost. Since she was once a healer for Cathy’s young daughter who was suffering with cancer, she steps into the daughter’s room, finds the hidden stash of dope and lights up.

In spite of that, Beatriz finally has enough when Doug starts bragging about a rhino he killed on an African safari. He seems to have done it for no other reason than to prove how strong and powerful he is. His story brings back to mind Beatriz’s pet goat that was cruelly strangled by a neighbor, and Beatriz, now fed-up with white guys in suits who think they rule the world, loses it. This leads to an ending that many may find controversial as director Miguel Arteta slides Beatriz at Dinner into the realm of magical realism. Yet, it’s true to the characters and the story, leaving the audience with a lot to discuss and debate, ending a night of superficial people in frivolous conversation with something profound for the audience to take with them. 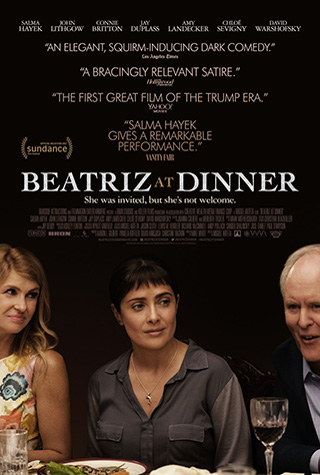