The craps-shooting, comedy caper, The House, is a bad gamble for former “Saturday Night Live” alums Will Ferrell and Amy Poehler. The betting windows tell a tepid tale of strained, transparent chuckles in this limp-minded, suburban satire that rolls the so-called humor dice to no avail. The mixture of collegiate financial desperation, spoof-inspired small-time mobsters, topsy-turvy marital shenanigans and a homemade casino nesting in the middle of unsuspecting suburbia designed to manufacture the madcap laughs simply comes up all lemons in this soured, cinematic slot machine.

The comedic odds are not in the favor of Andrew Jay Cohen (who scripted 2016’s dreadful “Mike and Dave Need Wedding Dates” and 2014’s somewhat raucously amusing “Neighbors”) who, in his directorial debut, desperately conjures up a convoluted canvas of empty-minded silliness, dismissive hiccup-induced hilarity and every other collection of pointless platitudes to drum up laughs. Unsurprisingly, the odds are not in the favor for Will Ferrell either, as he continues to churn out mindless and generic comedies that register with all the hysterical force of an all-you-can-eat buffet burp (see “Daddy’s Home” and “Get Hard” as examples). In the case of Poehler, her big screen collaborations with partner-in-comical-crime, Tina Fey, usually results in infectious, ticklish laughs, but here, the camaraderie doesn’t carryover and the Ferrell-Poehler tandem sluggishly brings down The House.

Ferrell and Poehler are Scott and Kate Johansen whose financial fragility is glaring, to say the least. In a nutshell, the Johansens failed to adequately plan for their daughter Alex’s (Ryan Simpkins, “Balls Out: Gary the Tennis Coach”) tuition when a full-paid scholarship fails to materialize for the Bucknell University bound student. Just what can the Johansens do to come up with the cash to cover the collegiate crisis without their dear, overachieving Alex finding out?

Enter neighbor Frank (Jason Mantzoukas, “How to Be Single”), a hirsute high-roller who happens to be a gambling addict and no stranger to the flashing neon lights of Las Vegas. The ball really gets rolling when the Johansens and Frank decide to put their heads together and hatch a plan to make some mad money that they all can benefit from quickly. After Frank quips about how the house in Sin City casinos always comes out victorious, Scott imagines they become the house and rake in all the possible loot for themselves. This elaborate ruse could be the ultimate payoff for all involved: The Johansens can save face and provide cash for precious Alex’s college fund, and soon-to-be-divorced Frank can reclaim his foreclosed property and rebound from his personal downfall.

So what Frank does next is turn his jeopardized domicile into the neighborhood basement casino where the well-funded locals can try their luck and feed their gambling fever. Ironically, the well-off neighbors do not seem to mind throwing their money away at the makeshift gambling den, yet they were opposed to graciously donating their cash as members of a supportive community to help out Scott and Kate in their time of need.

That is just one example of the relentlessly spotty script by Cohen and Brendan O’Brien (a fellow “Neighbors” scriber) that feels uninspired, gimmicky and arbitrarily foul. With the normally outlandish Ferrell and impishly crafty Poehler as the main faces behind this rowdy romp one would expect more substantive sizzle in this cockeyed parody of dysfunctional suburbia. However, the laughs feel flat and forced despite its intentional carefree “Hangover”-esque turbulence. The House strives to be inherently wacky, but never achieves the legitimate cynicism or sharp-minded irreverence it so desperately tries to convey.

The characterizations are forgettable and insufferably paper thin too. Ferrell and Poehler barely factor in as the illegal basement casino operators out to redeem their parental flaws. Mantzoukas’ flaky Frank comes off as nothing more than a Zach Galifianakis knockoff. The popcorn violence, vulgarity and mean-streak situations feel misplaced and misguided instead of perceptively edgy. Outrageous betting practices of white bread suburbanites, mobster-made interference met with dire consequences (in reference to the Jeremy Renner cameo as an unlucky mob boss), a shady citywide politician (Nick Kroll, “Captain Underpants: The First Epic Movie”), parental guidance gone haywire — it’s all stuffed in this cockamamie comedy paced with toothless (and tasteless) jokes.

Unfortunately, the hand that was dealt The House is a royal flush — but not the winning hand every poker player dreams of being dealt. Nope, it’s the humorless kind. The kind that swirls down the comedy commode. 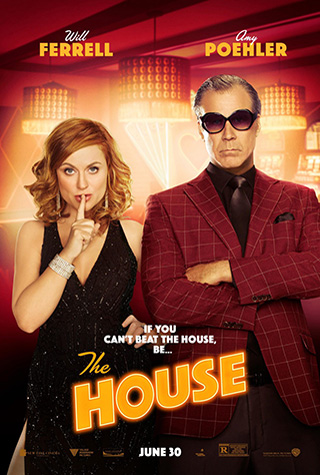