Animated films aimed at children are sometimes made to the detriment of the trapped grown-ups that have to accompany their restless tykes and endure the relentlessly silly-minded, junior-sized high jinks. However, there are a few animated films that can equally draw in the impish impulses of both the giddy child and sensible adult alike — a true testament to naughty, kid-friendly film fodder that gives universal permission to appreciate clever and quick-witted exuberance. Director David Soren’s (“Turbo”) notoriously cheeky Captain Underpants: The First Epic Movie fits this bill as a prized spectacle for goofy-induced gumption. Registering as a toilet-training session in hilarity for third graders, yet demonstrating a subversive streak of satirical overtones for the mature masses Captain Underpants: The First Epic Movie will be sure to plant a permanent smirk on the faces of countless viewers that may get an infectious kick out of celebrating live-action sock puppets and other random potty humor talking points.

The DreamWorks comedy, based on Dav Pilkey’s extremely popularized children’s book series, marvelously boasts crisp and energizing CG animation to go along with a roguish tale of grade school pranksters as they challenge the patience of the bothersome authority figures that oversee their academic misery. Unapologetic in its increasingly spry approach to tapping into the minors’ funnybones while giving a shrewd wink at the oldsters with its boundless irreverence, Captain Underpants: The First Epic Movie stays faithful to its source as outlined mainly from Pilkey’s book installments, “Captain Underpants and the Attack of the Talking Toilets” and “Captain Underpants and the Perilous Plot of Professor Poopypants.”

The stars of those books (and ten others) are grade schoolers and best buddies, George Beard (voiced by Kevin Hart, “Ride Along 2”) and Harold Hutchins (voiced by Thomas Middleditch, “The Bronze”), from Ohio’s Jerome Horowitz Elementary School (who knew that Curly Howard from “The Three Stooges” would have a grammar school named after him in the Midwest?) who have a raucous good time playing pranks on and trying to stay a few steps ahead of their party-pooper principal, Mr. Krupp (voiced by Ed Helms, “Love the Coopers”), an insufferable school administrator that the boys dislike with a healthy passion. Principal Krupp cannot tolerate kids and really has no business being in the profession he is in, but he does get some pleasure ensuring that the classroom climate is daunting for George and Harold (not to mention the other pupils that wish he would disappear once and for all). So in theory the pranks against Principal Krupp are therapeutic for the pesky lads in an effort to cope with an unsympathetic headmaster that does not really have their best interests in mind.

However, the boys not only have an adversarial relationship with Principal Krupp, they have to also endure the wrath of Melvin (voiced by Jordan Peele, “Keanu”), the school’s overachieving whistle-blower who has never taken a shine with the spirited George and Harold. Melvin proudly works as Krupp’s tattle-tale minion and gathers dirt on the trick-playing twosome to the point that the scheming principle is finally able to justify separating George and Harold. By banishing them to different classes, has Principal Krupp and Melvin been victorious in finally having the last laugh over the bothersome boys’ seemingly fun-loving ploys?

In a bizarre “payback” of sorts, the boys accidentally hypnotize Principal Krupp and turn him into their personalized hand-drawn comic book hero creation known as Captain Underpants. The nearly naked, egg-shaped Krupp is now stuck in the alter ego persona of the justice-seeking Caped Wonder (outfitted in tightey whiteys and a red ragged curtain-made cape) with George and Harold acting as his trusty sidekicks. In contrast Principal Krupp was distant, diabolical and distracting whereas his brainwashed superhero Captain Underpants is determined, dense and all-around delightful. The boys seemed to have struck gold with the new-and-improved Krupp, but they must contain him as Captain Underpants to a certain degree. Plus the added pressure of dealing with the new dastardly science teacher Professor Poopypants (voiced by Nick Kroll, “Loving”) is thrown into the hilarious yet unsettling mix.

Weirdly feisty with its celebratory ode to youthful imagination, school-driven angst and other offbeat growing pains issues Captain Underpants: The First Epic Movie does not prematurely soil its creative diaper so to speak. This DreamWorks animated farce is inventive, joyously snarky and includes a variety of eye-pleasing animated tactics and techniques that help shape the look and feel of this crafty kiddie fable. Also, it is a throwback to the old-fashioned cartoons of the baby-boomers and Gen Xers who grew up on unconventional animation that relied more on curiously kooky characterizations constructed with wacky storylines than the glossy, prefab production values of many of today’s animated features.

The firing of rapid jokes blending in with the snappy cynicism for adult consumption is a winning concept to behold. The vocal performances by plucky performers Hart, Middleditch, Helms and Knoll are completely satisfying and give humorous heft to the undeniable playful proceedings. Everything from the selected songs on the soundtrack to the unique tones of various animation methods come together in fruitful unison. It is safe to say that Captain Underpants: The First Epic Movie comes to the rescue to remind us that big-budget, explosive superhero sludge is not the only option at the movie theaters during the summer. 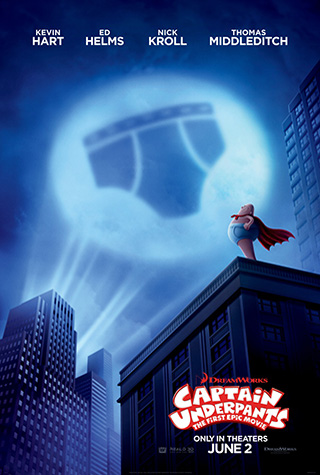