After the historic (and surprising) success of the original “Ride Along” in 2014, there were immediate rumors about a forthcoming sequel. The Ice Cube and Kevin Hart vehicle boasted the highest opening weekend gross ever in the month of January, bringing in over $154 million dollars. Kevin Hart’s rock star comedy presence sent the film into the buddy cop hall of fame as far as success is concerned, putting the film in position to start a franchise, and here we are just two years later with the release of Ride Along 2.

The sequel starts immediately after the events of the first. Detective James Payton (Ice Cube, “22 Jump Street”) is still a respected officer in his department, while Ben (Hart, “Get Hard”) is officially an officer but he still doesn’t have the respect he would like. Similar to the first installment, Ben is still aggressively trying to gain the respect of detective James in dramatic fashion. In one of the films first scenes the two are in an undercover situation and Ben arrives in a tricked out Chevy Impala with hydraulics (that he struggles to control). Once out of the vehicle he proceeds to interrogate the suspect, dropping his badge in the process, only to look up and ask the suspect if it was his.

The film briefly gives the audience a reminder of what the characters have been up to since the first film. Ben is in the process of preparing a wedding between himself and James’s sister Angela (Tika Sumpter, “The Haves and the Have Nots” TV series). While James is so tied up in his police work that he has no personal life at all other than keeping up with his sister.

Like most Hollywood sequels, this film has a larger budget to provide more action and cast members to the group. After James and Ben are sent to Miami for a special project, we are introduced to the films antagonist Antonio Pope (Benjamin Bratt, “Cloudy with a Chance of Meatballs 2”) who is a corrupt businessman with a hand in politics and the Miami drug trade.

Once the objective is known, Ben and James seek out for local help. The audience is then given the visual pleasure of meeting Maya, (Olivia Munn, “Deliver Us from Evil”) a female detective with the same brooding seriousness as James. While soon after, we meet A.J., (Ken Jeong, “The Hangover Part 3”) a computer hacker who goes back and forth with Ben creating most of the films hilarious moments.

The addition of these characters definitely takes some of the pressure off of Hart, who was responsible for carrying most of, if not all of, the comedic load of the first movie.

Hart is still given a lot of the screen time in Ride Along 2, but not nearly as much as in the first film. This can be attributed to the fact that director Tim Story (with the aid of writers Phil Hay and Matt Manfredi), wanted to give the film a more solid plot and much needed refreshing faces to differentiate the sequel from the original. Therefore unlike “Ride Along,” Hart is sharing screen time instead of being given open time to shine.

This is good and bad, because while there may be more of an emphasis on the plot of the film, the audience isn’t regularly rewarded with jokes as often as they were the first time around. The film’s plot is slightly more polished, for sure, but it inevitably falls into the same predictable category as most buddy cop films that Hollywood has churned out in the last 20 to 30 years.

But let’s be realistic, people don’t go to movies like these for their impressive scripts, they go to enjoy themselves, and while Ride Along 2 may not be as funny as its predecessor, it still watches as an above average buddy cop film. The cast keeps the tone lighthearted and doesn’t take themselves too seriously, which one can notice by scenes like Ben running from a CGI alligator or A.J. screaming for his life anytime a gun goes off.

By the film’s end, James, Ben, Maya and A.J. have solved the extensive Miami case. We are treated to the elaborate wedding of Ben and Angela and we are reminded of just how charming this cast is together.

Like Kevin Hart’s career, this film franchise is going to continue to provide laughs, as Cube and Hart have invited the idea of a third installment. And even though Ride Along 2 isn’t groundbreaking, fans of Kevin Hart and the comedy genre in general will enjoy this film that’s good for viewers of most ages and more consistently funny than not. 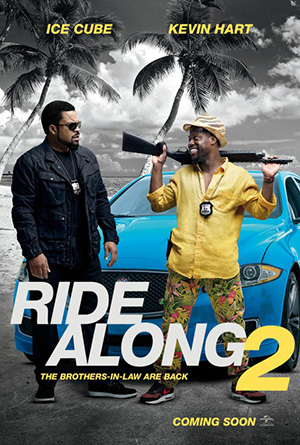