Besides the sophomoric sauciness to the title, Get Hard has both new phenom Kevin Hart and old pro Will Ferrell to bring in the crowds. Whether or not that is a recommendation or an indictment is difficult to tell. I prefer to let history decide.

As for the former star, however, I like my Kevin Hart in small doses, such as when, as a street thug, he badgered Romany Malco to near violence in “The 40 Year Old Virgin,” or even stroking a rabbit furiously in the awful “Fool’s Gold.” Given his recent rash of larger or even leading roles has not whetted my appetite. The latter, on the other hand, began his post-SNL career on a high note (“Old School,” “Elf,” “Anchorman: The Legend of Ron Burgundy” and “Talladega Nights: The Ballad of Ricky Bobby”), but after “Kicking and Screaming,” he seemed to slowly drift off the radar.

The sequel “Anchorman 2: The Legend Continues” was the final shove.

Now, in the spirit of such “stiff-white-guy-turns-cool-thanks-to-a-brother” picture (“Silver Streak,” “Stir Crazy,” “Cop Out,” the “Rush Hour” movies, among others), comes the latest installment which offers the scenario that sees Wall Street wolf, James King (Ferrell) sentenced to ten years in San Quentin for several counts of fraud and other indiscretions. That’s “reel” life; in “real” life, King’s money would have gotten him the best attorneys who would have gotten him time in a cushy, minimum security institution, but how much box office would THAT story earn?

Knowing he’s dead meat when he enters the big house, King employees his car washer, Darnell (Hart), to toughen him up.

So good, so far. The twist is, though, Darnell doesn’t have a criminal record (What?! An African-American in a modern film with a clean rap sheet?), so he fakes being a hardass because he needs the money (just like in “The Wedding Ringer”). Darnell has just one month to change the lily-white financial kingpin into the baddest dude in St. Q (or King could just prove his innocence, making the whole point of the movie null and void).

Yes, between King’s idiocy and naiveté and Darnell’s faux gangsta, there are a few situations in Get Hard that draw a snicker, but not a whole lot more. Hart’s pyrotechnic energy is effective in some sequences (where he plays three characters who want King to be their bitch), but he cannot keep up the pace and he (and the audience) soon tires of the almost non-stop hyper-kineticism. Ferrell’s attempts to adapt to the black culture pale (pun very much intended) compared to Gene Wilder’s, but give him credit for making an earnest attempt; and when he exits his home dressed like a cross between Lil Wayne and Flavor Flav, one cannot help but smile and shake one’s head.

Unfortunately, things begin to get way to serious for such a lightweight effort and soon we get infused into the gangland lifestyle and the racial and cultural divide is widened even more and even the derogatory word for “Negro” comes up — seemingly out of the blue.

Director Etan Cohen, in his debut effort, tries to walk the thin line between funny and offensive, often failing to achieve either one. Like the little girl with the little curl, when he’s good, he’s very good, but more often, he’s just under-whelming. And Ferrell, whose character is unbelievably stupid regarding Darnell’s context, seems to be in a daze much of the time, between being slapped around and continuing to prove what an idiot he is — until the denouement and his final redemption. It’s a long journey and not really worth the effort of taking.

Craig T. Nelson (who was a prison guard in “Stir Crazy” and starred with Ferrell in “Blades of Glory”) and Alison Brie (“The Five-Year Engagement”) lend as much support as possible without stepping on Hart’s toes — or lines — and the scenes in which King’s domestic servants give him a little comeuppance are all right, but it just could have been so much better. Not that there is anything even remotely humorous on the radar — one would be hard-pressed to get in some solid laughs — so Get Hard will have to do for now. 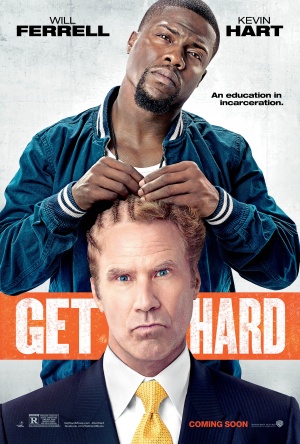