By far the best and most original aspect of A Cry From Within is the fact that it revolves around an extremely solid family. Advertising executive Cecile (Deborah Twiss, who wrote and directed the film and upon whose real life experiences it claims to be based), therapist Jonathan (Eric Roberts “The Expendables”), and their children Morgan and Ariel (siblings Matthew and Sydney McCann, who both starred in “Uncomfortable Silence” as well) are one of the easiest families to root for that I have ever seen on screen. Despite some occasionally wooden acting — especially when Cecile and Moran are distressed — they manage to present themselves as a group of people who genuinely care for each other, a striking contrast to another family in the film, around whose secrets the main conflict revolves.

When Cecile suffers a miscarriage and quits her job in the city, Jonathan follows through on an opportunity to facilitate a bereavement group on Long Island so his wife can get the change of scenery she needs. They pack up the kids and drive out to look for houses, only to have their car break down in front of a sprawling home inhabited only by Alice (Cathy Moriarty, “The Double”) and her mother (Pat Patterson, “Junction”), whose strained relationship is a complete foil of their mutual respect, inclusion, and love.

Having learned what has brought the family out to the island, Alice says that she has been thinking of renting out the house, which has much more space than she and her ailing mother need. More specifically, she says the the house needs a family.

Before long they have moved in, Ariel toting around a doll Alice thought her mother had gotten rid of, Morgan searching for a runaway guinea pig, and Jonathan and Cecile enjoying Cecile’s newfound sex drive, which has been extremely heightened since they arrived. Naturally, before long the family finds themselves terrorized by the presence Ariel claims to communicate and be trying to save; a tiny, long haired ghost boy who flits about the house terrifying Morgan, scratching Cecile, and locking Ariel in a room with a terrible past, in addition to plaguing multiple members of the family with creepy, revelatory dreams.

Since so many horror movies, from “The Shining” to “The Conjuring,” are predicated on families turning against each other or falling apart, A Cry From Within is extremely refreshing in the honest, open way Cecile and Jonathan communicate with their young children. For example, Cecile’s miscarriage is tastefully shown to the audience by having her start to experience cramps at work and immediately cutting to her crying and cuddling with her children on the couch of their Brooklyn home. When Ariel is scared she is never dismissed by her parents, even if this means Cecile must get up in the middle of the night to make bacon and eggs for her restless daughter who has started to take on the residual hunger of the house’s neglected ghost. Jonathan even brings home gifts of dream catchers and meditation CDs to try and help everyone calm down when they first start experiencing the house’s pervasive sense of unease. Another new aspect of this film is its nearly overwhelming use of light and whiteness; so many of the scares similar movies rely on happen in the dark.

Eventually, with the help of Alice and local priest Father Thomas (James McCaffrey, “The Suspect”), who both have tragic and tantalizingly revealed roles in the original tragedy that lead to the haunting of the house, its four new inhabitants come to understand and sympathize with the spirit who is trapped there leading to a conclusion that is loving, rather than frightening at all.

By far the worst and least original aspect of A Cry From Within is its final shot, which frustratingly negates everything it has worked up to until that point. These kinds of movies almost never have closure. This one does — albeit a cheesy, poorly acted, and strangely shot closure — and then uselessly takes it back. Because of that, as much as I appreciated the light, the wholesome family, and the pace of at least its first half, I have to say I ended up disappointed by this otherwise unique approach to the haunted house/haunted family genre. 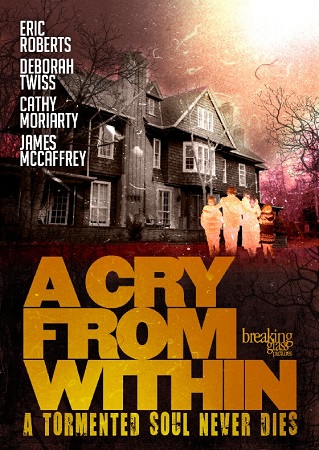