In the past, he’s been Douglas Fairbanks, Errol Flynn, and an animated fox. Now he gets to be Batman. Robin Hood, that legendary outlaw of yore, has recently returned to the big screen for his routine re-imagining in Robin Hood and this time he has more in common with the caped crusader than the Lincoln green-clad forest dweller. One needs to keep up with the times, after all!

Here, Robin (Taron Egerton, “Kingsman: The Golden Circle”) is a spoiled rich kid who appears to be an orphan (just like Batman!) and enjoys spending his time making out at Loxley Manor with his commoner girlfriend Marian (Eve Hewson, “Bridge of Spies”). The name Robin adds additional Batman connotations, but it’s not quite cool enough for this oddball attempt at being hip, so his friends shorten it to Rob. Much better.

Unfortunately, Rob has his make-out session interrupted by a draft order that sends him off to fight in the Crusades, which checks off a familiar narrative starting point that director Otto Bathurst seizes as an opportunity for abundant archery action. Arrows fly in all directions and at whizzing speeds as Rob traverses a crumbling Arabian city where Bathurst stages a frenetic set piece, setting the pace for the movie’s elasticized brand of mayhem.

But Rob soon becomes disillusioned with the war effort after seeing how evil the leaders on his side are and he returns home to Nottingham eager to upset the status quo. He must have stayed up late watching Chris Nolan’s “Dark Knight” trilogy, because he soon sees the benefit in becoming a symbol for the downtrodden, playing the part of a dashing upper-crust citizen by day and adopting an alter ego as a masked vigilante by night.

Aiding him on his journey to overthrow the money-grubbing, well-dressed Sheriff (Ben Mendelsohn, “Ready Player One”) is Friar Tuck (Tim Minchin, “Californication” TV series) and John (Jamie Foxx, “Baby Driver”), an amalgam of Robin Hood characters from the obvious tough guy sidekick to the sagely Muslim mentor that originated in a British TV series and was famously played by Morgan Freeman in Kevin Reynold’s 1991 blockbuster “Prince of Thieves.”

John teaches Rob how to wage war in the streets and stresses the importance of keeping his feelings for Marian at bay in order to protect her. While it’s a tough job, Rob recognizes that someone has to do it and he soon earns the satisfaction of seeing how he’s inspired the dreary Nottingham citizens when they start nailing hoods to walls in his honor. Never mind how the literally penniless townsfolk have come up with the cash to waste on so many specific garments in the name of sticking it to the Sheriff, but it’s certainly a nice gesture.

It also has the intended effect, which means it royally pisses off the Sheriff, although it’s worth noting that this is perhaps the most easily irritated Robin Hood villain to ever grace the screen. While the outlaw’s antagonists are almost always depicted as short-tempered, this Sheriff would probably throw a fit if you so much as made a funny face in his direction. Since Hollywood got its hands on Mendelsohn earlier this decade, he’s played a steady string of humorless jerks, so this role follows suit.

Speaking of suits, the Sheriff’s outfits have a strikingly modern flair, as if Nottingham might have a time-travelling tailor or two in its midst. This is the most enjoyable distraction of Robin Hood, its soupy summation of history and chronology that allows for an unusually modernized telling of the tale. There remains a medieval tinge, but the sets and costumes appear to be cribbed from a variety of different time periods.

Nottingham itself somewhat resembles England during the Industrial Revolution, with soot-covered workers toiling in a mysterious fire-belching mine, crafting imagery that is reminiscent of Bathurst’s previous high-profile directing gig, the first season of BBC series “Peaky Blinders.” The city’s fashion is even more loosely defined, with the Sheriff’s guards wearing full suits of armor, party-goers dressed as though they’re attending the Met Ball, and Marian constantly looking as though she just ended her shift at Hot Topic.

The mix of eras is random enough that it wouldn’t be all too surprising if Rob whipped out a smartphone and started texting heart emojis to Marian. None of this makes any sense, of course, and the movie flippantly excuses the nonsensical approach by inserting some voice-over at the beginning where the narrator specifically mentions that he can’t remember what year the story is set in. It’s clearly still meant to give off vague “olden times” vibes with the presence of horse-drawn carts and scenes of swordplay, but the modern touches have a loudly offbeat quality to them.

They represent an entertaining, if also ridiculous attempt to unearth a new approach to the oft-adapted material. In some ways, the look and style work to separate this version from other relatively recent takes on the familiar story. The raucous action, youthful energy, narrow geographical focus, and heavy use of cheesy CGI of Robin Hood are all an entire world away from the grittier, more adult-skewing epic, “Robin Hood,” that Ridley Scott made in 2010.

This need to reinvent and re-imagine is a common byproduct of the Hollywood machine’s default settings that suggest well-known stories can and should be perpetually retold. In a decade or so, Robin Hood will rise again to emulate what someone thinks are the cool trends of the current year.

For now, though, fans like me can enjoy the latest wackiness that the mythic hero’s cinematic ubiquity has led to. A cynic might be tempted to point out the irony of a character famous for a “rob from the rich to give to the poor” philosophy being regularly resurrected to fill the movie industry’s already overflowing coffers, but cut ol’ Rob some slack this time around. It’s not everyday that you get to be Batman. 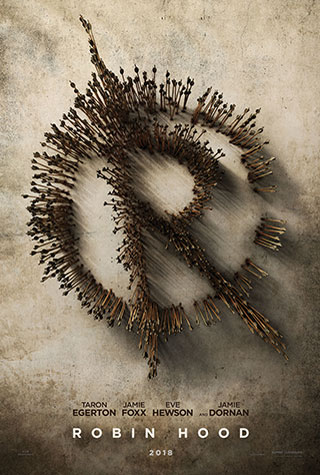