With a title like The Man Who Killed Hitler and Then The Bigfoot, there are only so many paths a movie can take. At some point, the titular man is going to have to kill Hitler and then he’s going to have to kill the Bigfoot. There’ll be some blanks to fill, but that’s going to be the meat of the story. And, for the most part, it is the meat of this movie with that title, except that the B-grade revisionist fantasy that sounds so silly on paper has been unexpectedly treated with a grave seriousness.

Kudos to director Robert D. Krzykowski for trying to tell this ridiculous tale with a straight face, but when an idea is fun in nature, choosing to make it a mirror of countless other war-era dramas can only feel like a Bigfoot-sized misstep. It’s not even a mirror of particularly good war-era dramas. For much of its running time, this is merely a dull tale of the one that got away for specialist soldier Calvin Barr (Aidan Turner, “Loving Vincent,” in flashbacks; Sam Elliott, “The Hero,” in modern times).

Older Calvin has lived for decades with the secret that he single-handedly turned the tide of WWII by assassinating the Nazi leader, but what really haunts him all these years later are the memories of gentle schoolteacher Maxine (Caitlin FitzGerald, “Adult Beginners”), the girlfriend he left behind when he went off to fight.

Despite the need to fulfill the promise of the title and chronicle Calvin’s top-secret missions at different points in his life, Krzykowski makes increasingly clear that The Man Who Killed Hitler and Then The Bigfoot is a love story above all else. The glaring issue here is not so much the bait-and-switch tactic as it is the cold, chemistry-challenged black hole that grows whenever Maxine and young Calvin appear together onscreen.

This is the part of the movie that is supposed to surprisingly soar and yet it’s difficult to accept, even on the most superficial level, that these two characters adore each other, let alone that their brief time together is enough to haunt Calvin into old age. Quite simply, their romance is a colossal bore and that directly damages the protagonist’s entire arc because so much of his journey is tied back to his alleged love for Maxine.

There’s also a bit of attention paid to the relationship between Calvin and his younger brother (Larry Miller, “Kiss Kiss Bang Bang”), which Krzykowski acknowledges as another opportunity to get overly and unconvincingly sentimental. These are the familiar pieces of oft-told war stories that the director seems incapable of injecting with any sense of freshness, which seems like a strange criticism given the movie’s title. But here we are, watching revisionist history fuse with pure fantasy to create something that feels almost absurdly generic.

By the time long-retired Calvin is tasked with another classified mission that now involves hunting down a plague-carrying Sasquatch in the Canadian wilderness, the movie’s somber tone and grim treatment of the silly plot turn is to be expected. And, to be fair, Krzykowski at least gives the audience what they’re waiting for: A few scenes featuring Sam Elliott with a gun versus a guy in a creepy Bigfoot costume (Mark Steger, “ 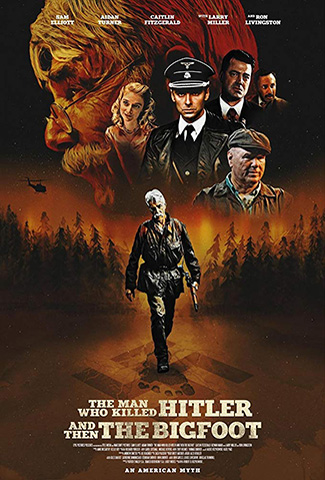 The Man Who Killed Hitler and Then The Bigfoot (2018)