God did I want to like Wildlike — I really, really wanted to. Let me tell you why. Though I’ll not bore you with unnecessary details, I should elaborate on such a self-absorbed claim: I am a seriously superstitious soul. “Seriously” is, in all truth, almost a euphemism in this context, but I rather drown in understatement than try to manipulate you with hyperbolic self-contempt.

I am as superstitious as it gets, yet mine is the kind of gullibility that demands making up my own superstitions based upon my anxiety levels. It must have been during one of those really high-leveled-anxiety-attacks that had occasionally charged over my rickety rationality that I translated the day of my birth (13) into my lucky number — and the month (7) into its perfect match. Now that you know when to address your “happy birthday” notes, let me note something much more relevant for the purposes of what gather us here: This review. This is my 13th review for this website. And, as every 13th occasion of anything in my life, I wanted (I needed) it to be special; but, due to the constraints built by my own superstitions, I just had to let it happen and leave it to chance — and shit had it failed me this time.

Debuting director Frank Hall Green’s Wildlike couldn’t be any less special. It is truly wild-like, a wannabe-wild film that is only alike those things it replicates; it is like a coming of age movie, like a road movie, like a family drama, like a feminist film . . . like many things it is not but wants to be. In the end, it’s just too lazy to be itself. Unlike its main character, 14 year-old Mackenzie, this movie is too concerned with being like other movies while at the same time retaining some degree of authenticity.

Mackenzie (Ella Purnell, “Maleficent”) is a determined young woman who seems to be less affected by the death of her father than her mother is. This latter (Diane Farr, always far from the frame) is seeking help in Seattle and, as part of her treatment(?), treats her daughter with a Summer trip to Alaska at her paternal uncle’s place (Brian Geraghty, “Flight”). The guy, though initially well-intentioned, turns out to be a creep who creeps into his niece’s bed to get into her panties. One nice day, as they’re hiking with one of her uncle’s friends from work (who seems authentically kind), the girl decides to leave out of the blue and disappear with the firm purpose of reaching her mom in Seattle. But things are not as easy as they seem, particularly when you have an unreliable parent, and the girl can’t find her mother in the mental institution where she seems she had done the same. And thus Mackenzie’s journey of healing and self-discovery begins.

As in so many movies of this spinoff of the road-movie genre in which the protagonist’s main means of transportation is their own body, and where trails and hiking have replaced cars and highways, this kind of character is looking to find their self by engaging in ecotourism. This millennial spinoff of the original road movie, in what we may call the ecoroad movie, has seen its biggest increase in the recent years — and many of them have been quite good. From Mia Wasikowska’s unwavering wondering in the Australian desert in John Curran’s excellent “Tracks” to last year’s Reese Witherspoon deglamorized Oscar nominated performance in Jean-Marc Vallée’s “Wild” to Sean Penn’s 2007 gem “Into the Wild,” there is more than a worthy title in the recent collection of this subgenre. Yet Wildlike will not make it there. It’s just like “Wild” but without the good parts — or rather not, but I couldn’t resist the wordplay here . . . it’s my 13th review! Give me at least the benefit of self-indulgence.

The worst thing about Wildlike is that its case of unauthenticity is the exact opposite to its leading actress’ case. Purnell’s Mackenzie is a perfect portrait of teenage grief. Wearing her mourning in her darkened eyelids (of mascara as a sackcloth), the pubescent griever stands out as possibly the only person who understood her character. As a matter of fact, the depth of her work is hindered by those with whom she has to share the frame, more particularly the two men: The offender and the redeemer.

Hey, wait a second, you’ve already mentioned the offender, but who the hell is the redeemer? Well, it turns out that the girl feels too fragile to make the journey of self-discovery on her own (she’s just 14!) and so she kind of squats into another hiker’s plans (after squatting under his hotel room’s bed). Here we meet Rene Bartlett (Bart, as she calls him — portrayed by notable one-noter Bruce Greenwood, “The Place Beyond the Pines”), a middle-aged widower who has taken the road to heal his own wounds in the very place where he and his wife spent so much of their precious time . . . starting with their honeymoon. Reluctant at first, Bart ends up (unsurprisingly) bonding with the young girl — and where she was looking a paternal figure he found the filial identification he so much longed after a childless marriage.

Contrary to what it may be initially assumed, we can attest from experience that ecoroad movies (just like road movies in general) benefit enormously from loners — their characters are better off left alone. Of course, they may encounter some other characters along the road, and these will add dimension to both the protagonist and their journey. Yet it is important for them to continue their trip on their own, for the road is usually an extension of their very selves — and thus the road is a self-exploratory exercise of self-reflection and ultimately of self-healing . . . or self-destruction (as happens with most early road movies).

In my mind, the only such exception I’m able to remember of a sort of road movie that actually benefits from a mismatched (non-sexualized) relation that concludes in the consummation of a beautiful bond is Walter Salles’ superb “Central Station,” where the filial and maternal relations match just like a glove at the back of a place wherein everybody travels — except for them . . . till they do. The difference with Wildlike is that in Salles’ film the adult grasped as much the kid’s character as the kid grasped the adult’s, and thus the movie could gravitate around their bond and not around one or the other — which seems was Hall Green’s intent: Everything and everyone around Mackenzie, even though, as she says, no one really gets her.

The words Mackenzie directs to Bart as she squats yet again his ride speak tons of what is wrong with this movie. “You don’t understand; you think you do but you don’t,” exclaims McKenzie to a frustratingly imperturbable Bart. And it’s true. Neither her co-lead nor the supporting cast nor the director nor even the writer (maybe because these latter are the same person) understood her. The sharpened balance between strength and fragility that Purnell achieves in her portrayal is wasted in words preached to the deaf.

And this brings us to another problem: The flawed sound design and sound mix of Wildlike — so much so that here we are talking about it. Even the initially intelligent use of telephonic dialogue as a mechanism that starts effectively conveying an absence (after discerning what the absent character is saying as it seems they were speaking from a manhole) suddenly, and inexplicably, morphs into a stalking device, which, by the way, never succeeds in being threatening — only annoying.

Wildlike is like many things, but, as itself, it is, at its best, a conventional melodrama dressed with pretty images. Of course, some viewers would bring out the accomplished cinematography of Hillary Spera (specialized in this kind of outdoorsy, landscaping jobs). And, though the images are sometimes breathtaking, it must be said that it is not too much of a feat to capture breathtaking images in Alaska (unless, of course, you’re filming at the Palin’s). Actually, the cinematography ultimately resonates in the overall outlook of the project, both its director’s and crew’s: The movie gets as good as its lead and as cold as its setting. Sigh. 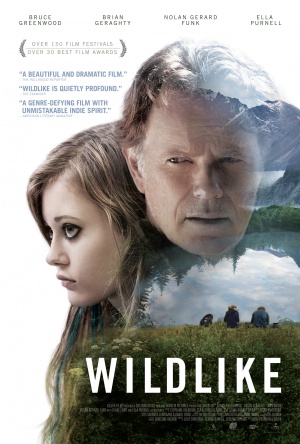