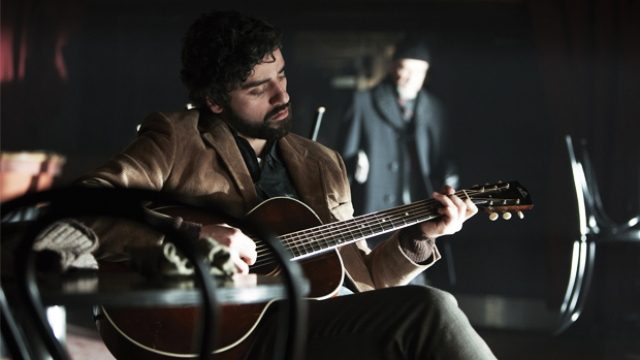 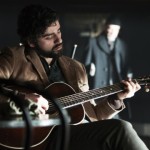 Folk music has been around ever since there have been folks, but the folk revival of the 1960s was due in large part to the increased topicality of the songs and their relevance to the changing times. Though singers such as Joan Baez and Ian & Sylvia among others continued to sing traditional ballads, singer/songwriters like Bob Dylan, Tom Paxton, and Phil Ochs brought new life to the folk scene with their songs of sharp social and political comment. Little of the new vibe, however, creeps into the Coen Brothers Inside Llewyn Davis, the story of sad-eyed troubadour, Llewyn Davis (Oscar Isaac), a talented folk singer who remains stuck, singing in conventional mode while others of perhaps lesser talent move forward.

Set in Greenwich Village in 1961, Inside Llewyn Davis is loosely based on the memoir of Dave von Ronk, a successful sixties singer/songwriter and left-wing political activist who was known for his personal generosity and loyalty, qualities that are not reflected in the film’s main protagonist. The dour Davis is understandably downcast after the devastating suicide of his friend and member of his folk group Timlin and Davis and the strain and weariness shows clearly on his face. He releases a solo album but it does not bring success and a scene in the office of his agent (Jerry Grayson) tells us all we need to know about his financial and emotional state. Without any stability in his life, he is forced to rely on friends and whatever family he has to put him up for a few days at a time.

His frustration is such, however, that he alienates those who try to help him including his sister Joy (Jeanine Serralles) whom he puts down for her conventional lifestyle. He is also at odds with his friend Jim (Justin Timberlake), and his wife Jean (Carey Mulligan) who thinks she is pregnant with his child and wants him to pay for an abortion. Her foul-mouthed disdain (uncharacteristic of women in the sixties, by the way) for Llewyn is both a sad and a comic high point of the film. Davis also stays with Columbia professor, Mitch Gorfein (Ethan Phillips), and his wife Lillian (Robin Bartlett), parents of his deceased partner.

A sequence in which the Gorfein’s cat escapes from the apartment during his stay prompts a chaotic chase scene with the elusive animal and results in the singer having to carry the cat around with him for most of the film, a symbol of whatever you want to make of it. A trip to Chicago to visit record producer and owner of Chicago’s Gate of Horn club, Albert Grossman (F. Murray Abraham) introduces us to a few more colorful characters such as Roland Turner (John Goodman), a heroin-addicted jazz musician with severe disabilities and a sharp tongue (who Davis cruelly leaves alone in an abandoned car on the highway), and the chain-smoking taciturn actor Johnny Five (Garrett Hedlund). 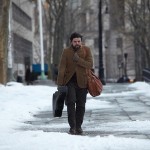 The scene depicting Davis’ solo audition with Grossman is mesmerizing in its stillness and sense of anticipation. Here Davis performs the English ballad The Death of Queen Jane while Grossman sits next to him, his gaze focused intently on the singer. Though the song is beautifully rendered, it seems inappropriate to what Llewyn is trying to accomplish, prompting Grossman to say, “I don’t see a lot of money here.” The music in the film, however, arranged by T-Bone Burnett, is its centerpiece and is deeply moving, especially songs such as Hang Me, Hang Me, The Last Thing on My Mind, beautifully sung by Stark Sands as Troy Nelson, a young Army officer, Bob Dylan’s Farewell, 500 Miles, Fare Thee Well (Dink’s Song), and the Ewan MacColl song The Shoals of Herring, sung by Davis to his sick father.

Even though the Coen Brothers’ message — that it’s difficult for any new artist of average talent to be successful in a highly competitive arena, especially when their actions are toxic and self defeating, is not a startling piece of information, Llewyn is a real human being who has so much soul that, while we may not like him, he strikes a responsive chord in anyone who has ever been on the outside looking in. Basically, what is inside Llewyn Davis is what is inside all of us, the longing to be accepted, to connect with and contribute to others, a longing that, though it is often misdirected and filled with pain, is universal and allows Inside Llewyn Davis to transcend the singer’s limited perspective. While Davis insists that singing is just something he does, we get the sense that, underneath his “poor me” act, he clearly knows that his singing indeed is “a joyous expression of the soul,” and is now ready to tap into it. 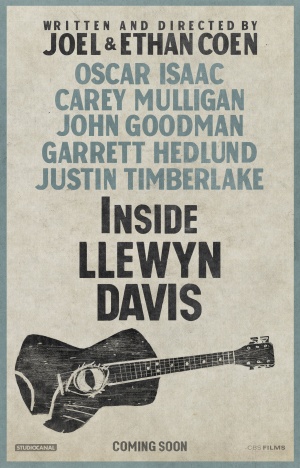