With a few hours to kill during this long weekend (thanks MLK Jr.), I figured I’d sit back with a cold beer and watch a good old fashioned comedy. Waiting . . . is another movie based loosely off of the “Animal House,” “Office Space” mold. You can’t fuck up a movie like that! Or can you?

Waiting . . ., as said before is another adolescent angst movie that covers 2 nights and day in the lives of the lost, working a dead end, day to day job at the local Shenanigan’s restaurant. How can’t that be funny? First throw in the latest incarnation of John Belushi — Ryan Reynolds. You’ll know him from other adolescent flicks like: “Harold & Kumar Go to White Castle” and “Van Wilder.” Here amazingly enough he plays a douche bag, know it all womanizer who thinks he is king shit of the restaurant. He doesn’t stray far from what he is good at. Playing off of his zaniness is Justin Long, the freakish looking Luis Guzmán and the sometimes hot Anna Faris.

Although, I’ve never worked at a restaurant (thank God), Rob McKittrick seems to catch the absurdity and the insanity of it all, albeit in an over the top fashion. The game of trying to get others to unknowingly stare at your dick and balls in strange positions (bat wings, bull horn, etc.) just to call them a faggot, is an exceptionally funny touch. Having an asshole, power hungry boss (played by David Koechner) that we can all make fun of, is something we can all relate to also. However, underneath all the absolutely idiotic and childish humor, Waiting . . . actually shows us how people can band together even under the worst of conditions. They all support each other during work by offering advice or helping with an unruly table. Most importantly though, after the shit day is done they all put aside their differences and party their fucking asses off together. Quite the band of merry men (and women).

Let’s be realistic though, Waiting . . . isn’t going to be winning any Oscars any time soon. It is stupid and pretty predictable, but you will find yourself laughing at some of the more nutty moments. If nothing else, at least you can come up with a few more positions for your dick and balls to show off to your friends and family.

Movie Review: Underworld: Evolution (2006)
Movie Review: The Chronicles of Narnia: The Lion, the Witch and the Wardrobe (2005) 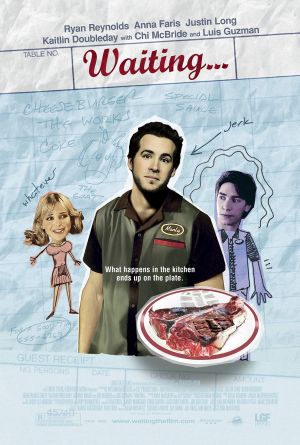