Based on the play “God of Carnage,” by French playwright Yasmina Reza, Roman Polanski’s latest outing, Carnage, follows 2010’s “The Ghost Writer,” a film unceremoniously swept under the rug. Not to suffer the same fate, the retitled, Brooklyn-transplanted (an impressive facsimile utilizing special effects and careful production design, mimicking the real thing adeptly despite having been shot in Paris) adaptation of Reza’s comedy of manners takes place in the home of Penelope (Jodie Foster, taking on the most difficult, not to mention least likable role) and Michael (John C. Reilly, delivering a solid performance but making a small impression) Longstreet and serves as a battleground for two couples who trade barbs and expose themselves as childish frauds with issues masked by décor and word choice.

Nancy (Kate Winslet, terrific) and Alan (Christoph Waltz, clearly relishing his obnoxious turn) Cowan drop by for a brief visit to tackle a seemingly minor issue — their son has assaulted the Longstreet boy with a stick in a playground confrontation. Reza’s script, touched up and Americanized by the playwright and Polanski, takes great pleasure in tackling the way we wield specific words to fuel our own power trips — mind the word “assaulted,” utilized by Foster’s Penelope and effectively a catalyst that launches first pits the Cowans against the Longstreets but then splits along gender lines and finally splinters as the foursome unleash their loathsome (and perhaps “true”) selves and then stop abruptly to survey the carnage.

First, the accolades — outside of the first and final scenes, the film is set entirely in a single space, and the Longstreet middle class haven is a testament to how good production design (by Dean Tavoularis) can elevate a positively small set to an extension of the characters. There is a wealth of tiny fixtures that serve to underline the precision that drives Penelope, who shepherds the seemingly good-spirited mediator Michael under the auspices of making peace. Clothes tell a tale of class distinction, Michael at one point complaining, “My wife dressed me up as a liberal!,” while stifling business attire immediately characterizes the Cowans. Polanski directs Carnage with a heady real-time pace that sees the four leads mark their territory (in Winslet’s case, via spontaneous vomiting) and stake their ground as discussions give way to bickering, finger-pointing and finally raw, awesome vitriol.

Winslet is the standout performance, her Nancy liquid courage writ large, going off on her husband and the Longstreets in a verbal assault accentuated by her increasingly drunken state. Waltz finds mannerisms in Alan that serve to infuriate even his wife and his smartphone is a vital prop that Waltz treasures as one would a small child, perhaps more. Penelope challenges Foster, who scrunches her face and howls, looking awfully unpleasant — Penelope is hard to like, since she instigates the key argument and shields herself with faux idealism and a striving for an intellectual appearance while nursing a mean temper. Reilly’s Michael feels like a supporting performance and while Michael’s scenes one-on-one with Penelope reveal a shared history, Reilly comedy chops undercut his eventual descent into a foul-mouthed fit — there is a kindness that characterizes the actor and prevents Michael from truly making a mark.

My issue with Carnage is simple — while the 80-minute runtime is well-handled by the talented cast and a world-class filmmaker, there’s little beyond some class warfare and White People Problems to make the film more than a briefly memorable acting showcase. There are pleasures to be found in examining the specificity of design and deliver on display but it all feels hollow and when the ending suddenly plops down and the credits make their way across the screen, I lifted my hands in the air, turned to a friend and mouthed, “That’s it?” You may be left asking yourself the same question. While the film deserves hefty praise, it seems to be destined to a fate as a conservative adaptation when it could have taken the subject matter and ran with it. For a film that basks in the sudden incongruency and needless bickering that rises like the crest of a massive wave, Carnage washes out, leaving barely an indent. 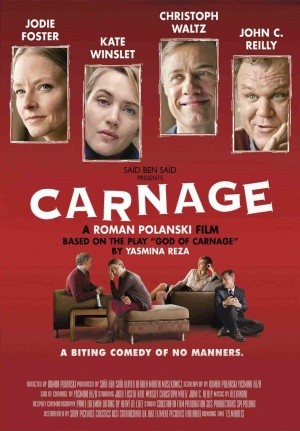