I often feel like I don’t have enough time in the day to get everything done (I could always use a few more hours for movie watching!), but such complaining pales in comparison to the plight of the citizens of Andrew Niccol’s sci-fi parable In Time. For them, time is their lifeblood and not having enough hours in the day to do fun stuff is a simple irritant rendered pointless by the fact that they generally have barely enough time to live. Set in a sort of alternate reality (or retro-ized future) where time is the new currency, In Time imaginatively and impressively explores the conflict between the time-rich and the time-poor.

Everyone walks around with a glowing green set of numbers that burn bright just beneath the skin of their forearms. The numbers break down how much time each individual has, ranging from a few minutes to the ridiculously near-immortal period of several thousand years. For those living in the ghetto, like protagonist Will (Justin Timberlake, actually wearing the charismatic role relatively convincingly), life is a constant struggle to maintain digits on their internal clock. Will works a dull job in some sort of dull factory and the time he logs is paid out in time that he then has to use to keep the bills at bay. It’s a tough life where the only end in sight is his time completely running out.

Niccol grabs us from the beginning with his virulent display of concept exploration. He instantly sets up the premise and then begins to really hammer home the strange, startling specifics of the situation. Want a cup of coffee? That’ll be four minutes! It may not sound like much at first, but considering that most ghetto denizens are walking around with just a few hours on their arms puts the cost of such common pleasures in perspective. Costs keep rising, too, while stagnant wages squash any hope of getting ahead. Living paycheck-to-paycheck has been replaced by quite literally living day-to-day and the expired bodies that keep ending up on the ghetto streets are a strong sign that things are only getting worse.

The metaphor for economic imbalance is blatantly obvious and Niccol boils it down even further by focusing entirely on one ghetto and one big, luxurious city. Maps on walls tell us that the entire U.S. is divided into “time zones” and it’s safe to assume that the rest of the world is in a similar situation, but Niccol isn’t interested in taking a globalized approach to the fascinating concept. He wants to provide a more focused microcosm of this new type of society. By reducing the narrative to one good, though poor zone, and one bad, though rich zone, he is able to tighten his view and provide a more character-centric adventure. The claustrophobic setting doesn’t leave much room for any gray area (people are either really good or really bad), but at least Niccol applies the duotone approach to all aspects of the movie. He’s certainly consistent.

Nobody is ever straddling the middle road here, so when the inciting incident shows up, it’s sure to skip the space between time-poor and time-rich. In this world, no such space exists, so Will has the incredible fortune of being rewarded for a combination of good Samaritan work and great timing (oh the irony!) by gaining over a century of life. Suddenly, he’s gone from pitifully poor to wantonly wealthy. With this new lease on life, he’s finally able to escape the ghetto (it requires a ton of time to cross into another “time zone”) and check out the big, fancy city. Of course, Will isn’t about to be corrupted by riches, since all he wants is to break down the barriers between rich and poor and add some balance to this mess.

Will’s journey allows the movie to transform into a slightly clunky action vehicle during which he kidnaps the feisty daughter (Amanda Seyfried) of a calm, collected dude (Vincent Kartheiser) who might just be the closest thing to an immortal on the planet and is then hunted by a group of time-cops led by a scowling Cillian Murphy. Niccol’s handling of the action sequences is nowhere near as interesting as his handling of the day-to-day conflict enacted by the concept, but he does approach the chase sequences with enough zeal in order to prevent the adoption of an action flick template from feeling too arbitrary.

None of the performances in the movie are particularly outstanding, but they’re all pretty good at the same time and Timberlake is fun to watch in the embattled hero role. Seyfried is a bit one-note, but at least her character isn’t a complete damsel in distress and she makes her heroic moments look good. A romantic edge soon emerges and they prove to have enough chemistry to make it all plausible. Murphy and Kartheiser are playing two rotten bad guys with pretty flat arcs, but they’re still intimidating enough to take seriously. Even Alex Pettyfer offers a decent turn as a time-stealing gangster, certainly a step in the right direction after embarrassing himself earlier this year in the horrid “I Am Number Four” and laughable “Beastly.”

Adding extra flavor in key areas, Niccol warps the design of the movie by employing a retro chic that is offset by the stunningly futuristic time pieces embedded under everyone’s skin. All of the cars have classic designs, but appear to run on electricity (the idea of surviving one economic hardship with the abandonment of gas-powered engines, only to face a far more difficult one is an unspoken commentary). And then there’s the curious absence of cell phones, so often a staple of future world redesigns. At one point, Will decides to make a call and he rounds a corner only to find . . . a series of payphones?! As if the lives of ghettoized individuals living hour-by-hour need to be any more inconvenienced.

With his trademark use of sickly yellows and pretty blues, Niccol paints an intriguing portrait of extreme class struggles gone uniquely and chronologically awry. In Time puts Niccol back in juicy science fiction territory, from where he launched his brilliant 1997 directorial debut “Gattaca.” The thought-provoking sci-fi narrative with a human twist is clearly a passion of Niccol’s and this represents a more satisfying return to the genre than his clumsy 2002 picture “S1m0ne.” This film is still nowhere near the magic of his first movie which remains proof of Niccol’s ability to craft a profoundly emotional experience. But despite what In Time is not, it remains a creatively clever concept picture with a really sharp imagination. It tickles the mind and acts as a strong, inventive reminder that while a fancy cup of coffee may be expensive in our world, at least it doesn’t cost us our lives. 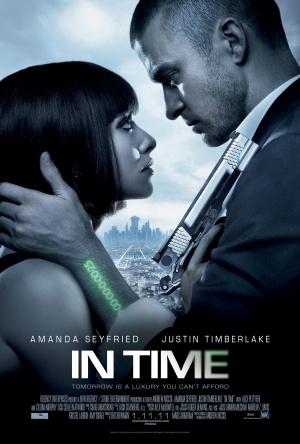