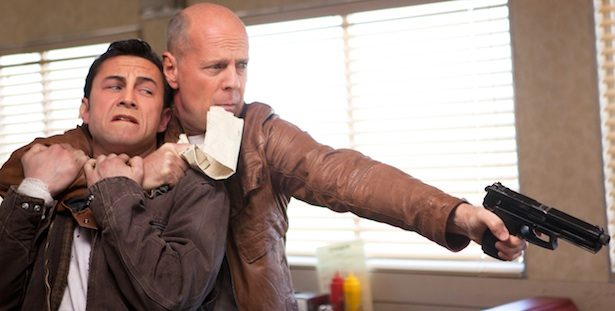 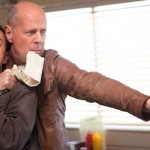 Stop me if you’ve heard the premise of Looper before. 2044. Time travel hasn’t been invented yet. Fast forward thirty years later, when time-travel is illegal and used by future gangsters to dispatch targets. The target is bound, hooded and sent back to a one-way encounter with a Looper — hired guns in 2044 making an easy living by blowing holes through unwilling 2074 time travelers. Silver bars strapped to the bodies are their reward and in a Chinese yuan dominated US, that’s a currency to kill for.

Joe (Joseph Gordon-Levitt) is good at his job, but he knows, as do his fellow Loopers, that sooner or later he’ll unwittingly “close the loop,” murdering his older self and making his demise certain. The problems begin if a Looper lets the target get away and . . . that’s all you need to know frankly. Much of this is delivered via voiceover by Gordon-Levitt, attempting to disappear underneath prosthetics to emulate the specific features that define the old, bald badass Bruce Willis, who pops back from the future, knocks out his younger self out and goes on the run.

Why he’s back and not resigned to closing the loop is a question, but not the question this writer feels director Rian Johnson (“Brick,” “The Brothers Bloom“), who also penned the script exploring his intelligent, bloody and surprisingly accessible third film, is trying to answer. Taking the road of avoiding spoilers almost completely, in summary Looper is a film about choosing between the man you are and the man you could be. Young and Old Joe tussle as we’d expect them to but the second and third acts settle into essentially a single location and begin to set up a climax that is vastly different from what you’d expect. 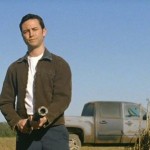 Waiting for a job.

Johnson could have easily supplied an action film that saw the younger star snatch the action mantle away from the grizzled veteran, but the director likely looked to “12 Monkeys” and “Children of Men” as examples and set out to subvert expectations, crafting a thriller that concludes with an unexpected emotional gut-punch. Credit to Johnson too for creating a thought-out, well realized world that does not seem implausible, just a shade or two removed from our current turmoil if humanity, in particular America, doesn’t pull itself out of an economic tailspin. Supporting players like Paul Dano, playing fellow Looper Seth, Piper Perabo as Suzie, a paid companion to the younger Joe, Jeff Daniels as present-day Looper mob general Abe, and Emily Blunt as weathered but not withered single mother Sara do a great job of elevating the moments not spent in company of the two Joes. Noah Segan, who made a memorable impression in “Brick,” is a formidable opponent as the unhinged Kid Blue.

Going into Looper with a clean slate and a desire to connect with Johnson’s twisted and frequently disturbing world is a must. Spoilers will sap away at the viewer, in particular with the change of pace and a lack of massive action set-pieces. What this film comes down to, as many good films do, is a small group of characters locked in a possibly fatal struggle, each fleshed out and their intentions clear. What happens next is what makes Looper memorable and worth of discussion. Something tells this writer the film will age well. 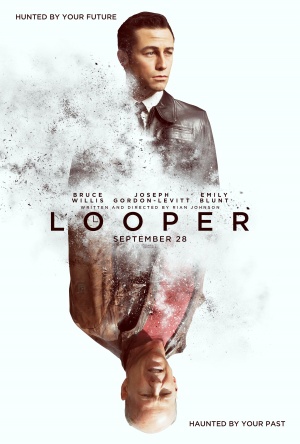