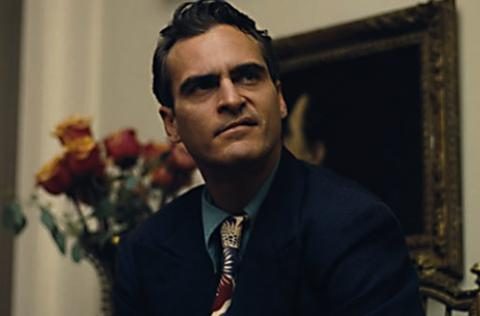 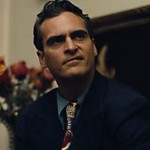 Once thought to be a sort of incendiary indictment of Scientology, Paul Thomas Anderson’s The Master turns out to have much more on its mind and is far less easily described. Often dipping into non-narrative space and at times seemingly impenetrable, Anderson’s sixth feature is focused on the post-war journey of drifter, loner, and spiritually alienated alcoholic Freddie Quell (a grotesquely transformed Joaquin Phoenix, whose shape and movement suggests a decrepit human pretzel). We first meet Freddie just as World War II is wrapping up. Freddie’s days in the Navy are over and now it’ll be time for him to move on, find a job, and search out some meaning in his life. The job part is relatively easy, but grasping some semblance of meaning ends up a messy, meandering endeavor. A lost soul trying to find his place in the universe sounds like the makings of an uplifting tale, but Anderson steers The Master in a completely different direction, showing us a man incapable of achieving his goals or even barely articulating them. Freddie’s journey is unsettling, uncomfortable, and unnerving, and the movie that surrounds him follows suit.

Taking its time to mull over the details of Freddie’s current existence, The Master moves slowly, though crisply. Character interactions crackle and conflict is always just one violent emotional outburst away from boiling to the surface. Psychological instability runs like a fault line through the entire movie, constantly threatening to split the onscreen world apart and cause irreparable damage. It’s dangerous, but perhaps hardly a threat to Freddie, who is so severely wrecked that it may simply be too late for him. Such is the unique strangeness of Anderson’s movie; where the lead character is locked in a quest he can’t complete, clawing for meaning that is beyond his reach. Hope proves elusive for Freddie and it never feels like Anderson is helping the character along or aiding him in any way. Freddie goes where he goes and we’re just here to watch the guy’s journey unfold. Or unravel.

Potential rescue from his wayward lifestyle arrives when Freddie stows away on a ship and meets self-professed writer, doctor, nuclear physicist, and theoretical philosopher Lancaster Dodd (Philip Seymour Hoffman), whose mysterious movement known as The Cause quickly attracts Freddie. Dodd’s methods are suspect and his theory that ailments can be solved through a special brand of hypnosis that supposedly allows believers to tap into previous lives and experiences is clearly rooted in crackpot territory, but that doesn’t stop Freddie, desperate for a connection, from joining the group.

As Freddie is pulled deeper into the Cause’s network, we are left to observe and form our own judgments regarding the validity of the movement. Anderson allows us to peek behind the curtain, but it’s up to us to make sense of what we see. This approach is quite fascinating, because it provides us with a fly-on-the-wall perspective that insists we engage more with our own thoughts than with the characters on screen. Connecting to Freddie and Dodd and even Dodd’s dedicated, surefooted wife Peggy (Amy Adams) is nearly impossible, considering how alienating their experiences are, but they’re such intriguing characters that watching them becomes a sort of perverse pleasure.

Anderson smartly avoids turning these people into walking punch lines and the actors elevate their characters by making them utterly believable, no matter how nutty they become in their confusion and conviction. The Master is often viewable as a very dark comedy and the movie is filled with deeply, disturbingly funny moments, but the potential laughs are never intended as cheap pot-shots aimed at cults and charismatic leaders. The characters fill the situations with the utmost sincerity and the humor that permeates the picture comes honestly through them. Even with often very comical performances by Phoenix and Hoffman, Freddie and Dodd are never reduced to cardboard cut-out simplicities. Their outbursts feel genuine, regardless of how ridiculously hilarious they may be. 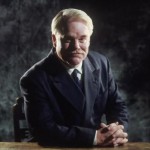 Dodd has a few good explosions when challenged at times, but Freddie is like a grenade with the pin ready to be pulled at any second. With the slightest provocation, he explodes into a rage and takes it out on some individual who dares anger him with so much as a bad word about himself or The Cause or Dodd. Freddie’s fury further fulfills his status as an unlikable protagonist, since the people that he attacks are almost always far easier and more sensible to sympathize with. And I thought Daniel Plainview, Anderson’s last harrowing lead from “There Will Be Blood,” was a tough nut to crack. Freddie is a whole other breed of destructive force. He probably wouldn’t drink your milkshake, but he’d certainly toss it in your face and try to choke you with the straw.

Phoenix makes Freddie an almost unrecognizable being at times. Hunched over, his hands pushed to the back of his hips to rest, spewing lines, between manic laughter, through a distorted corner of his mouth, the performance stretches to every corner of his body and still fully inhabits his mind. It’s a wildly unhinged metamorphosis that engages through its sheer monstrous qualities and precise attention to detail.

Like the lost soul at its dark, chewy center, The Master drifts and pulls us along with it. The movie marks another awesome achievement for Anderson and makes a strong companion piece to “There Will Be Blood,” feeling as much a part of a pair as Anderson’s earlier pictures “Boogie Nights” and “Magnolia” do. But even then, The Master stands on its own as Anderson’s most challenging effort to date. It’s an uncompromising picture that dares to suggest a lack of change that practically negates what we just watched. It’s also a chilly portrait of an awfully hopeless man, and yes, a skeptical look at philosophical fallacies dressed up as faith-dependent religion. It’s a lot of things, not just one thing; none of them easily accessible, all of them fascinatingly robust. Anderson continues to amaze with yet another grand effort. Someone get this man a milkshake. 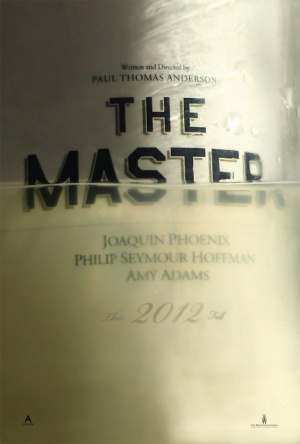