Not sure about you, but I’ve always been a buff on the unknown, supernatural stuff. I’ve always been intrigued by vampire tales or ghost stories. The stranger and scarier the better. So without a doubt, I wanted to see the second installment of the “Underworld” series, Underworld: Evolution.

Underworld: Evolution has a simple premise: Vampires and werewolves fighting each other. Mix in some human casualties and plot line older than my grandmother and you’ve got a successful idea for a movie. This particular incantation, Selene (Kate Beckinsale) is on the run with Michael (Scott Speedman), from the vampires who have betrayed her. While on the run, the truth of the vampires and werewolves legacy comes to light and, you guessed it, Selene must save the day.

For the most part the movie delivers on what it promises. Action, a shitload of blood and guts, and plenty of Kate Beckinsale in tight leather. Let’s take a closer look at each. Action — there is no shortage of it. Car chases, explosions and fights are littered everywhere. I think the only moments of non-action were during the boring ‘sex scene’ and a few minor flashbacks. Gore — fucking piles of it. Len Wiseman (director) must have sat back and thought of every possible way to kill a man and how to film it. Because it is all here. Bullets, swords, teeth, helicopter blades, etc . . . it’s all here. Sex appeal — Kate Beckinsale looks great. I never knew who she was prior to the first “Underworld” movie, but it is safe to say, no one will forget who she is now. In the similar vein of Carrie Ann Moss from “The Matrix.” Tight leather clothing on a woman with a fantastic body goes a long, long way.

Of course there are some downsides to the movie. For the most part, the movie just doesn’t bring the bang expected after the first “Underworld.” It’s got the action, but just not the pizzazz, there’s something missing. And although, Marcus (the final founding vampire) is a bad ass motherfucker, I wanted to see him be a badder ass motherfucker. To have him get beaten so easily by Selene irritates me to no end.

Final verdict? It is clear why Underworld: Evolution is #1 movie in the country. It’s got the right mix of all the previously mentioned attributes. And it’s a whole hell of a lot better than that snore-fest “King Kong.” 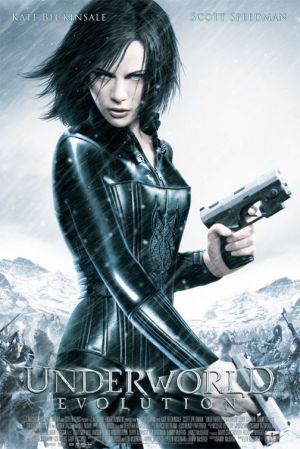