“Beauty is truth, truth beauty, —that is all / Ye know on earth, and all ye need to know” — John Keats

While it is generally agreed that imagination plays a prominent role in artistic creation, it is apparent to all but some academics and literary biographers with a particular agenda, that art cannot exist in a vacuum but also must have a social, historical, and biographical context. Prominent German artist Gerhard Richter said that “when we see a work of art, it is a manifestation of wounds that the artist suffered and decided to turn into something beautiful.” One of five films nominated in the Oscar’s Best Foreign Film category, German director Florian Henckel von Donnersmarck’s (“The Tourist”) masterful Never Look Away (Werk ohne Autor), is a three-hour plus work that spans three decades of German history from the 1930s into the 1960s, tackling the issue of the origin of human creativity and the context in which it is created.

Set in Berlin, Dresden, and Dusseldorf, Never Look Away, the director’s first German work since his Oscar-winning 2006 film “The Lives of Others,” is inspired by the life of the artist Richter who, as a child, experienced the firebombing of Dresden and the murder of his beloved aunt in the Nazi’s Eugenics program. Taking us from the period before, during, and after World War II to the division of Germany, the Soviet control of the East and the building of the Berlin Wall, the film tells the story of a young artist struggling to find his voice in a political atmosphere that prizes conformity and service to the State over an artist’s discovery of their own truth.

Exquisitely photographed by acclaimed cinematographer Caleb Deschanel (“Unforgettable”), Never Look Away opens in a museum in Dresden in 1937 where there is a so-called “degenerate art” exhibit featuring many of the modern artists that Hitler detests for impinging on the purity of German culture. Kurt Barnert (Cal Cohrs, “Path”), a young boy with soulful eyes, takes in the art of Picasso, Matisse, Kandinsky, Paul Klee, and other artists the Nazis consider decadent. The boy, an aspiring painter, visiting with his free-thinking Aunt Elisabeth (Saskia Rosendahl, “Wild”), admires the paintings even while the tour guide (Lars Eidinger, “Clouds of Sils Maria”) has something disparaging to say about all of them.

When Kurt says to his aunt, “Maybe I don’t want to be a painter after all,” Elizabeth tells him that everything that is true is beautiful and to never look away from truth and reality. On the way home, she persuades the drivers of assembled buses to sound their horns in unison so that she can physically express the blaring sound in a whirling dance that is as beautiful as it is surreal. After an episode witnessed by Kurt in which Elisabeth plays the piano in the nude, then attempts to recreate the sound of a particular key by banging an ashtray on her head, the young aunt is diagnosed with schizophrenia and forcibly removed from the home as Kurt, told to never look away, becomes a reluctant witness.

Assigned to SS doctor Professor Carl Seeband (Sebastian Koch, “Bridge of Spies”), Elisabeth is condemned to become part of a Nazi mass sterilization program in which mentally ill and physically disabled women are subject to sterilization and murder, a program that it is estimated killed over 100,000 women deemed unfit to produce children. Fast-forward a few years, the adult Kurt (Tom Schilling, “Woman in Gold”), deeply affected by the death of his aunt, attends art school in Dresden, now a part of Soviet-controlled East Germany where he meets and falls in love with Ellie (Paula Beer, “Transit”) who bears a striking physical resemblance to his Aunt Elisabeth. it is only later that he learns that Ellie’s father is the same Nazi doctor who condemned his aunt to death by marking an “x” on her chart with a red pencil.

Compelled to produce the social-realist art demanded by the GDR, Kurt and Ellie flee to Dusseldorf in the West along with Ellie’s father who no longer receives the protection of a Soviet commandant he once assisted in a crucial moment of his daughter’s childbirth. The autocratic doctor, who insists on being called “Herr Professor,” wants to prevent Ellie from becoming more deeply involved with Kurt whom he considers weak and inadequate, and is prepared to go to considerable lengths to do that when Ellie becomes pregnant. Accepted into the avant-garde Kunstakademie Düsseldorf, Kurt embraces the kind of artistic freedom that had been denied to him under both the Nazis and the Soviets.

Presiding at the Academy is Professor Antonius Van Verten (Oliver Masucci, “Look Who’s Back”), a stand-in for Joseph Beuys, the mentor of an entire generation of German artists and himself considered one of the most influential artists of the second half of the 20th century. Elevated by the powerful score of Max Richter (“Mary Queen of Scots”), Never Look Away is a rich and compelling film that raises difficult questions about the true source of artistic inspiration, offering hints but no easy answers. While there are moments in the film that flirt with melodrama, to its credit, it does not shy away from expressing both the physical and spiritual aspects of art and life in terms that are both intimate and universal.

When Van Verten comes to look at Kurt’s work, after telling him the backstory of his own artistic redemption, the teacher’s only comment on his work is that “it is not you.” After he has the experience that everything in the world is connected and that by freeing yourself you can liberate the world, Kurt realizes that it is only when he is ready to confront the demons of his past that he will be able to express through art, the ineffable truth and beauty of his life. 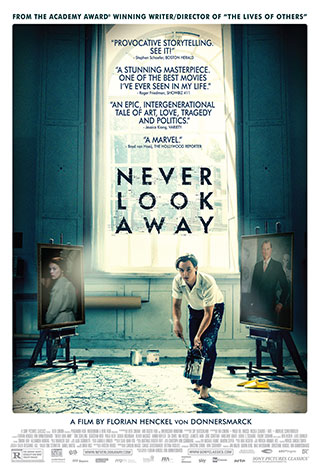