For a film with a tantalizing title like Velvet Buzzsaw, it sure is disappointing. What a shame. The talented cast, with the likes of Jake Gyllenhaal (“Stronger”), Rene Russo (“Thor:The Dark World”), Toni Collette (“Hereditary”) and a criminally underutilized John Malkovich (“Warm Bodies”), try their best to salvage the poorly thought-out narrative. However, it is hard to save something that self-masticates; the film is its own buzzsaw.

The satirical premise starts out with promise, though.

Gyllenhaal as art critic Morf Vandewalt struts with absolute swagger and speaks from an immense word bank. Every time he opens his mouth I feel like I am back in an Honors English class (what does ‘ensorcell’ even mean?). Watching him wear this caricature of a persona contributes to the more entertaining parts of the movie. We see gallery owners clamor for the publicity and dollars his good review would get them. The art pieces shown sometimes feel too “try-hard,” wrapped in a pretentious narrative that doesn’t really say anything, which of course is meant to elicit a discussion of what we consider to be “Art.” Morf’s opinion takes on a Godly weight, where artists are crushed by his scathing reviews and others elevated from his good opinion. “I am not your mouthpiece!” he screams out at one point, cleverly showcasing the difficult position a critic would find himself in. Critics are supposed to walk an unbiased, objective line — that’s not possible. We as lay people are subjective in our response to a work of art, so why would art critics be exempt from this?

Morf may claim he is not for sale, but with the rampant commercialization that inundates the art world, it is clear that everyone is buying or selling something. Collette’s character very aptly points out that everyone sells out anyway, which is why she trades in her museum job to become a personal art buyer for a client with a private collection. We learn that the rich don’t buy art because they feel or connect with it; they treat it as something to commodify, and this is enabled by nearly everyone in the art world. The biggest example of this is when Josephina (Zawe Ashton, “Nocturnal Animals”), who works for Rhodora (Russo), discovers a man dead in his apartment. While there is horror felt for his plight, the man’s haunting artwork becomes the greater focus. The artist Vetril Dease left explicit instructions for his art to be burned, but of course this is ignored by Josephina and Rhodora for the frenzy of the bottom line.

As Velvet Buzzsaw continues, we gradually learn of Dease’s dark past of mental instability, with his artwork a tangible embodiment of his frayed psyche. There is certainly food for thought here, since Dease stands (or lies, since he is found dead on the floor) in contrast to the now sober Piers (Malkovich), whose sobriety has affected his ability to churn out art. It makes one wonder if ennui is necessary to artistic brilliance.

When the critique and discussion is the world of art, that’s where the film delights. This aspect is lost when the horror element kicks in, and that is where the film starts to fall apart. The two genres feel so tonally different that they just don’t work well together. It becomes apparent that anyone who has profited from Dease’s artwork is a target for his possessed art, and one by one they all start dropping dead. There is no particular order to how this supernatural force works. Ultimately, I felt like I was watching a different type of movie altogether, reminiscent of the likes of “Final Destination,” though I think I felt more horror and revulsion watching the death sequences in that movie than Velvet Buzzsaw.

Also, the scene transitions feel static and don’t really have purpose, coming across as rather episodic, with the production value of a television series. It is commissioned for Netflix after all, so maybe the platform purposely contributed to the low-budget visuals. There are some fantastic overhead shots of the city at night and in the day, but otherwise, it is so visually dull, which is disappointing given the film’s subject matter. There’s that word again: Disappointing. I appreciate director Dan Gilroy’s (“Nightcrawler”) ambition, but all I have to say to that is, better luck next time. 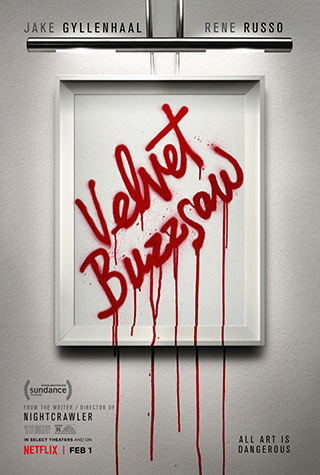