April 15, 2013. This infamous date would rock not only the Greater Boston/New England region but send a devastating shock wave throughout the nation and world. It was, sadly, the fateful day of the double bombing at the Boston Marathon. A day that would forever change and upset the lives of those victimized by this terrorist atrocity which included three people killed and countless severely wounded. Among those psychologically and physically injured was an everyday Joe named Jeff Bauman who lost both his legs in the explosion. This traumatic experience would transform the former roguish slacker into a reluctant hero seen as the face associated with political inhumanity.

Director David Gordon Green’s powerful and probing drama Stronger captures the poignant essence of Bauman’s struggles and ultimate determination to conquer the life-changing adversity he faced. The seriousness of the topic makes the choice of Green — who early in his career hit on indie dramas like “George Washington” and “Undertow,” but more recently helmed stoner comedies like the cultish “Pineapple Express” and “Your Highness” — to direct interesting, but he handles the absorbing, contemplative and captivating narrative with deft hands. The film’s lead star Jake Gyllenhaal (“Nocturnal Animals”) is strikingly raw and convincing too as Bauman, who is humbled by triumph and tragedy. Gyllenhaal, for his efforts, should nab an Oscar nod for his inspired performance that feeds Stronger its gripping elements of soul-searching truth.

The film itself is based upon the extraordinary memoir of the same name penned by Jeff Bauman and Bret Witter and John Pollono’s heart-rending screenplay captures how symbolic Bauman’s coping mechanisms were to a disillusioned nation looking for logic in an unkind and illogical act of violence. The blue-collar Bauman was not what one would call noble prior to the deadly blasts that cost him his legs, but he still would epitomize the never-say-die cry of “Boston Strong” and lead the rise above the fray.

He was in fact the quintessential man-child that really had nothing going on that one would label him ambitious or productive. Jeff was, however, undeniably passionate about certain things like his unapologetic allegiance to the Red Sox and Bruins, and hanging out with his buddies. It does not even embarrass him that he shared a small cluttered apartment with his mother Patty (Miranda Richardson, “Churchill”) or that he earned a paltry income (he worked as a chicken roaster at Costco) so long as it covered his need to drink and eat at the neighborhood bar.

The one person who was getting tired of Jeff’s chuckle-head routine was his girlfriend Erin Hurley (Tatiana Maslany, “The Vow”). She felt neglected by Jeff as he took zero interest in the activities she liked. This, of course, takes us to the fateful day, because as a compromise Jeff decided to attend the marathon to support Erin as she runs.

His attending the event to appease Erin would factor into further psychological turmoil for everyone involved. Jeff has to deal with the harsh reality that his injuries make him feel like an incomplete man — one that has lost his sense of vitality. The public wants to paint Jeff as a hero, but he does not see himself as such (the rumor of Oprah coming to interview him makes him feel intimidated). In the meanwhile, Erin must overcome her guilt for forcing her Jeff to be at the wrong place at the wrong time, and Patty has her own set of guilt and grief as the bombing has disabled her son and nearly destroyed his morale.

Inevitably, Stronger will be compared to another feature that first tried to capture the senselessness and destruction of the 2013 Boston Marathon: Peter Berg’s rousing offering “Patriots Day.” The two films both define the confusion and chaos that would blanket Bostonians/New Englanders in deep-seeded disbelief. “Patriots Day,” however, was a fictionalized account that concentrated more on the overall heinous act and law enforcement’s agenda to catch the terrorists responsible. Stronger, on the other hand, is more personalized as the focus is on Bauman and his fellow victims’ attempt to come to terms with the life changing event.

Both are powerful dramas in their own right.

If anything the true story aspect of Stronger elevates its ability to connect the viewer to the explosive event. It is more than just retelling the conventional tale of a 28-year old slacker finally coming to grips with his life under the eye of the national spotlight. No, it is intuitive and riveting emotion as demonstrated by Gyllenhaal’s brilliant turn as Jeff Bauman propped up by top-notch supporting performances by both Richardson and Maslany that fuels a spellbinding drama of overcoming dysfunction with determination. It paints a sympathetic portrait that terrorist strikes are not just statistics, they can, and do, effect real people. 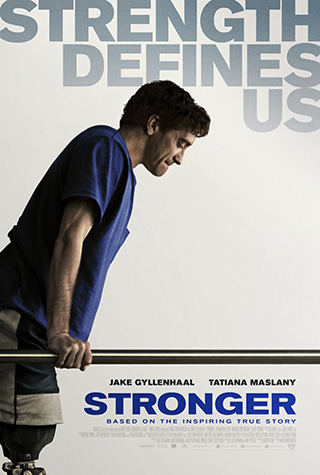