For a British voter and cinemagoer, it is a singular experience to see a film about Winston Churchill in the aftermath of a general election. The film is especially distinctive in 2017, as the British government displays all manner of contradictions and at times inadequacies, whereas Churchill, both the film and the legend of the man, are concerned with a time of unity and alliances. And yet, Jonathan Teplitzky’s film features far more disagreement and conflict among the architects of D-Day than one might expect, and presents a surprising picture of a Prime Minister often held up as the “greatest Briton of all time.”

With a reputation like that, one might reasonably expect that the film Churchill would be hagiographic, presenting Winston (Brian Cox, “Morgan”) as the only man who knows what is right and that his strategic brilliance is what ensures the success of the Normandy invasion. Pleasingly, Teplitzky’s film does not fall into these traps. While Winston is presented as honorable, loyal and committed to serving the needs of Britain, especially when it comes to preventing the deaths of British soldiers, he also appears impotent and not nearly as commanding as he possibly believes he should be. Strategic meetings between Winston and the military high command, led by General Dwight Eisenhower (John Slattery, “Spotlight”), highlight the Prime Minister’s attempts to influence Operation Overlord, with suggestions of alternative attacks and changes to the Normandy invasion. These sequences and those that surround them are enjoyable pieces of political drama, Winston butting heads with the generals and only submissive to King George VI (James Purefoy, “High-Rise”).

At many a turn, other forces within the political-military structure — both British and American — overrule Winston, turning him into a wounded lion who rages at his wife Clemmie (Miranda Richardson, “Testament of Youth”) and secretary Helen (Ella Purnell, “Wildlike”). Yet despite his frequent angry expostulations, Winston always remains sympathetic, not because of the historical adulation that the actual figure holds, but because within the film he remains understandable and relatable as a man carrying the weight of the world. In an early sequence on a beach, Winston imagines the waves turning red, and he frequently frets over the inevitable casualty rates of the invasion. Yet he does his duty with unflappable resolve, and the viewer is never likely to doubt that this leader would put himself on the line if it would help save others.

Much of the sympathy for Winston can be credited to the performance of the masterful Brian Cox. Cox captures the iconic growl, a constant but never overstated limp, hunched shoulders that express Winston’s burden, as well as an expression of utter indomitability, yet one that does not succeed in hiding fear and doubt behind the fierce eyes. The military leaders who circumvent Winston powerfully convey the sense that they must work with this irascible and belligerent politician, and despite the risk of becoming caricature still come across as human. As Clemmie, Richardson is superb in conveying the weariness of a long-suffering wife who supports the Prime Minister, even if as a couple they are distanced, which recalls a similar couple in “Lincoln.” The other performers are also very fine: James Purefoy makes King George VI his own, avoiding comparisons with Colin Firth’s Oscar-winning portrayal in “The King’s Speech,” while Ella Purnell gives Helen a tremulous sense of the British people, in thrall to the icon of Churchill but deeply affected by the constant threat to loved ones. Helen has perhaps the most moving moment in the film when she bursts out in terror about the forthcoming attack and what it might mean, which reawakens sympathy and compassion in Winston. This gives voice and image to those for whom the War was fought — those at home who looked to Churchill for guidance, courage and strength, and the difficulties that Winston faces in providing these.

The problem with Churchill is its repeated return to the ongoing argument about how best to conduct the Normandy landings. Despite Winston’s various tactics, the film does become repetitive as he makes an attempt to influence strategy but is then thwarted, tries again, and is thwarted, while Eisenhower, Clemmie and even King George demonstrate frustration at this man they must work with no matter how difficult he becomes. This repetition is disappointing because the political machinations of Alex von Tunzelmann’s script are engaging, and might have been more so with some variation.

Where the film excels, however, is in Teplitzky’s steady assembly of the Winston Churchill icon. The characteristic black suit and bowler hat takes time to appear, although the almost absurdly long cigars are ever present. In a wordless scene as Winston returns from another unsuccessful meeting, some children see him passing and make the victory sign that the Prime Minister made famous, which he returns in a weary yet heartfelt manner. The period detail is handsomely crafted, with costumes and sets creating a strong sense of time and place. There is a frequent use of crossfades that create differences in scale: Close-ups of Winston’s face fade over tiny figures walking through imposing landscapes, and these moments emphasize the film’s conceit of small men in great events. Winston Churchill does not come across as the great man praised by historical propaganda, but as a man involved in great events that rises to the challenge of being what is expected of him, even when he has little control over those expectations. As a result, Churchill works as an assembly of iconicity, as well as a powerful character study slightly different to widely accepted history. 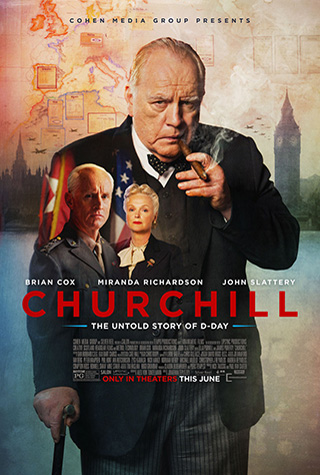