Looks like the summer of 2017 is going to be another mixed bag of movies. For every well-received, attention-getting spectacle such as “Guardians of the Galaxy Vol. 2” or “Wonder Woman” we are gifted something rather flimsy and forgettable such as co-writer/director Johannes Roberts’ generic “divas in deep water dilemma” thriller 47 Meters Down. Contrived in tepid-minded tension Roberts’ (“Storage 24”) underwhelming underwater psychological suspense piece that dares to tread in shark-infested waters is a relentless soggy affair. Although it boasts two pretty Barbie Doll leading ladies as a draw for the young male crowd, a breathtaking and flavored scenic land and watery locale that stimulates visually, and those toothy “Jaws” knock-offs swarming around in menacing fashion, it still barely remains afloat with all the conviction of a defective, hole-ridden buoy.

Roberts and fellow screenwriter Ernest Riera (“The Other Side of the Door”) look to develop a challenging script with all-too-familiar clichéd trappings pertaining to endangering human life due to wild elements found in nature — in this case violating the sanctity of predatory sharks and their sacred habitat. There is nothing wrong with illustrating the constant battle between intrusive human beings needing (or selfishly wanting) to test the curiosities of nature or take on the urgent challenges of exploring the unknown depths of wildlife. The motivation behind this clunky narrative could have been a decent commentary on the continued arrogance and ignored violations that man maintains when crossing the boundaries of beastly conventions. Sure, 47 Meters Down will simply be dismissed as just flashy escapist entertainment to pass the time away in its tedious 89 minute running time (in other words skeptical movie critics . . . relax and take a chill pill!). However, this watered down damsels-in-distress throwaway summer flick could have been so much more than the paper thin gimmick it presents so arbitrarily.

The story centers around two vacationing American youthful sisters Lisa and Kate (Mandy Moore, “License to Wed” and Claire Holt, “Aquarius” TV series) as they visit Mexico. Originally, the trip to Mexico was reserved for the older sibling Lisa (we are told that she is an insecure soul . . . a stick-in-the-mud if you will) and her former boyfriend who decided to dump her. So the plucky Kate inherits the traveling spot as a replacement for Lisa’s ex and the sisters soon take off for the fun and frolic in the Mexican sunshine.

It is not long before the girls attract the attentions of local guys Javier and Louis (Chris Johnson, “Game Day” and Yani Gellman, “Pretty Little Liars” TV series) at the local drinking establishment. The guys suggest a daring activity to the normally extroverted Kate about possibly enjoying the experience of taking a ride on grizzled Captain Taylor’s (Matthew Modine, “Jobs”) boat and doing some shark cage sight-seeing in the process. Reluctantly accepting little sis Kate’s invitation (and needing to shake off her reputation as a safe bore) the fearful Lisa green lights the plan to go aboard Taylor’s vessel and get up close with the deadly, massive man-eaters.

So the sisters don the scuba gear and prepare to exit the deteriorating boat not knowing what unkind fate lies ahead of them. Yikes!

As Lisa and Kate are lowered about five meters into the water beneath the boat a freak accident occurs involving an unreliable winch cable that supposedly secures the cage. Specifically, the winch cable snaps and the doomed sisters are sent 47 meters deeper into the hostile sea with circling sharks waiting to make these vulnerable and confined human gals their immediate appetizers. Understandably panicked and uncertain, Lisa and Kate have to ponder the realities of their dire situation that range from the one hour of air that they have left before they potentially drown to becoming easy pickings for the killer sharks’ ravenous digestive systems should they try and flee to the surface.

Perhaps 47 Meters Down will capture some kind of dramatic winching with its clutch “survival against all odds” premise where the audience roots for the infectiously comely sisters trying to outwit the dangerous wrath of enormous blood-thirsty sea creatures looking to rip into them like a rabid raccoon into a stale piece of muffin left behind the city dumpster. Then again, maybe not as the “pretty looking prey in peril” formula is only exciting in selected doses.

At its best, 47 Meters Down is a blatant rip-off blending the likes of the aforementioned “Jaws” with the blueprint reminders of “Open Water” sprinkled with a cheapened serving of hope and despair from “127 Hours.” At its worst, it suffers from a simplistic and shaky plot, dialogue that feels woefully forced and trivial and underwater photography that is so cloudy it becomes quite distracting because we can barely make out the sense of the sisters’ claustrophobic nightmare.

Overall, this sluggish “she-power vs. shark devour” concoction is nowhere near pleasing enough to even urge a giddy guppy to leave its dull fish tank. 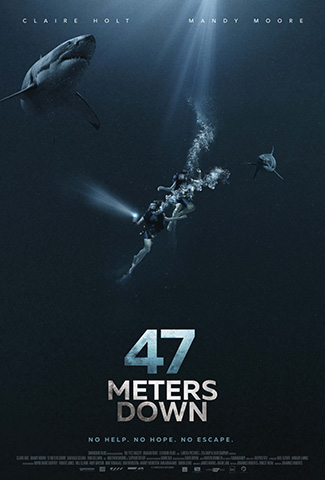