Unable to sleep one night, young Martin (Gabriel Bateman, “Annabelle”) ventures from his room to investigate some whispering he hears in the hallway. He discovers his mother, Sophie (Maria Bello, “The 5th Wave”), talking in hushed tones to someone in the shadows. She apologizes, asking, “Did we wake you?” and sends him back to bed. Moments later, he sits in terror as someone scratches at the door and tries to get into his room; as a result, he stays awake for the remainder of the night.

The next day, his sister, Rebecca (Teresa Palmer, “Knight of Cups”), is called to his school and is informed that Martin has fallen asleep in homeroom three times in a week. Becca, who lives in an apartment on her own and has experienced some of the horror-filled nights Martin describes, tries to take in her little brother as a way to force their mother to attend more carefully to Martin’s safety. A visibly unstable Sophie replies that there’s no threat in her home, and tries to convince Martin that her friend, Diana, means them no harm. Left with no other choice, Becca and her boyfriend Bret (Alexander DiPersia, “Good Girls Revolt” TV series) stay the night with Martin, and try desperately to find a way to keep everyone safe from the extremely frightening being Sophie calls Diana.

Based on director David F. Sandberg’s short film of the same name, Lights Out is an incredibly simple, yet effective horror movie that’s thin on story development, but, admittedly, this isn’t a film people want to see because of a detailed plot. Audiences are immediately sucked into a world that’s perpetually darkened by drawn curtains and lamps with missing lightbulbs. Diana lurks in darkness of all types — she hides in closets, in blackened rooms, and even in slight shadows cast by a lit candle. She is greedy about her connection to Sophie, and ensures her own preservation by snatching her enemies into the dark. The tension is just as relentless as Diana herself, and the film wastes no opportunity to show how terrifying this spectre can truly be when threatened.

The practical effects used to create Diana are as unsettling as they come. Diana crouches in dark hallways, and, as depicted in the film’s trailers, disappears when light is shined on her. She moves swiftly and invisibly, so that when the light goes out, it’s revealed that she’s covered quite a distance. People who admit to being afraid of the dark will tell you that it’s not the dark they fear; it’s what could be lurking IN the dark that makes their skin crawl. Sandberg wields this notion as masterfully as Jason Voorhees wields a machete, and he couples it with masterful sound manipulation — you want those noises to stop, but when they do, you desperately want them back to serve as clues to Diana’s whereabouts.

Lights Out tightly curls its audience members into their seats and forces them to peer apprehensively into the shadows of the dimly lit theater. One of the best sequences involves light uncontrolled by the characters — picture a room lit by a blinking neon sign outside the window, and imagine the terror derived from knowing you can’t keep that sign lit. Your eyes constantly scan the screen for any scrap of light characters can safely surround themselves with, and groan with pained anticipation when that light is snatched away. The film is loaded with the kind of tension that stays with you long into the night — those late-night trips to the kitchen or bathroom won’t be made in the dark without your mind conjuring the image of Diana creeping in your hallway.

Now, while I, personally, prefer a film that’s got a developed storyline with a valid (or at least attempted) explanation for “what’s happening” in a haunting, I have to admit that Lights Out is a enjoyable scarer that’s definitely worth seeing, especially in a crowded theater. We love the summer movie season because we’re given fun popcorn films we don’t have to take seriously and that we can laugh about with friends. Well, what’s more fun than a horror movie that succeeds in getting the most seasoned viewers to jump in spite of themselves? We lament that it doesn’t happen often, so it’s quite the treat when we’re gifted with one. And since we’ve already enjoyed “The Conjuring 2” this summer, we’re pretty lucky to get a second in Lights Out.

Just be sure to keep your flashlights handy. 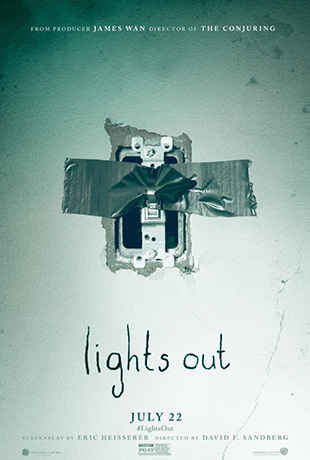