I was only nine years old when the first “Ice Age” came out in 2002, but my memories of it are very fond. While it hasn’t aged as gracefully as I’d hoped in recent years, I still regard it as one of my favorite childhood movies because of its great character dynamics and clever Looney Tunes-esque humor, but perhaps its biggest strength was the surprisingly mature turn the movie took in the third act. It didn’t pander to its youth demographic, and it ended up handling emotionally touchy subjects such as death and loneliness very delicately for a children’s film. It was the perfect movie to kickstart a successful franchise that both adults and children could appreciate . . .

Although it had the opportunity to blossom into a more thought-provoking franchise in the vein of movies like “Toy Story” and “How to Train Your Dragon,” the “Ice Age” producers chose to embrace its mania-driven comedic side instead. There’s nothing wrong with that conceptually; it’s perfectly fine for a kids’ movie to serve as a mere comedic diversion so long as it still has some entertainment value. Sadly, there isn’t much of that to behold in Ice Age: Collision Course, which ends up representing some of the worst and laziest clichés animated films has to offer.

Although the driving force of the plot is the characters trying to escape the impending end of the world, the movie bogs itself down with too many aimless subplots for any potential drama to carry any actual weight. All of the primary characters from the previous films return here, and I do mean ALL of them! You’ve got the mammoth trio of Manny (voiced by Ray Romano), Ellie (voiced by Queen Latifah), and Peaches (voiced by Keke Palmer) basically recycling their sitcommy subplot from “Ice Age: Continental Drift,” this time with Peaches’s obnoxious fiance trying to get her to break away from her family amidst the chaos. Then there’s the sabre-tooth tiger couple Diego (voiced by Denis Leary) and Shira (voiced by Jennifer Lopez), who this time do little more than briefly discuss the possibility of having a child (a discussion that lasts maybe a total minute of screentime). And finally, you have Sid the sloth (voiced by John Leguizamo), who seems to be the only character who hasn’t developed at all since the first movie and has only become more grating with each additional sequel. His entire subplot revolves around finding a mate, and while this is one of the only subplots that gets a conclusion, it still, like the rest, feels like meandering filler.

Aside from the characters I just mentioned, you have plenty of new ones thrown into the mix. The problem is that almost none of them do anything of consequence and have zero impact on the plot as a whole. Even the villainous characters are weak, forgettable, and completely non-threatening. They’re just there for a cheap gag or two, slowly wasting your time with an abundance of distractingly anachronistic pop culture references to hashtags, profile pictures, and probably worst of all, yet another forced cameo from Neil deGrasse Tyson (the fourth one I’ve seen this year). I understand anachronistic humor has become a staple of the series, but it’s in maximum overdrive here, and it’s hardly ever funny.

Keeping in tradition with their lineup, Blue Sky Studios does have some colorful animation that is likely to keep the kiddies’ attention, and the voice acting all-around is fairly competent. There are also two characters whose scenes prevent this film from being total garbage. The first is obviously Scrat, whose dialogue-free Wile E. Coyote sequences continue to be the highlight of the series, and the second is Buck, a returning character from “Ice Age: Dawn of the Dinosaurs” who is voiced with genuinely amusing enthusiasm by Simon Pegg. Unfortunately, neither character has the ability to carry the movie on his own, and you spend most of your time just waiting for them to come back onscreen.

Ice Age: Collision Course is nothing more than a diversion for your children, but they deserve smarter entertainment than this. It’s arguably the weakest entry in the franchise, shamelessly hitting the same beats as before, but never giving you anything substantial or worthwhile. The characters, having been milked dry of all of their charm over the course of four sequels, are just gliding through a series of innocuous setpieces at this point. There is no passion to tell an actual story with them anymore. Almost every joke is tired, safe, or recycled from a better movie, which is unfortunate, because I think a plot circulating on the apocalypse can breed a lot of interesting storytelling scenarios in this universe. With “Finding Dory” and “The Secret Life of Pets” still in theaters, you have no reason to bring them to this. 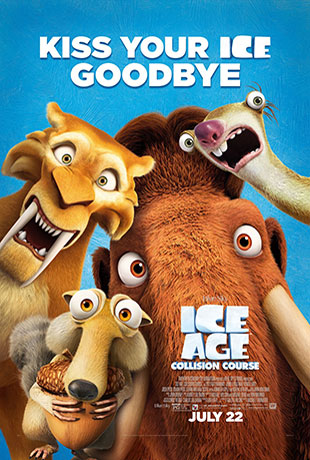