According to military historian Antony Beevor, “The subject of the Red Army’s mass rapes in Germany and elsewhere in Europe has been so repressed in Russia that even today veterans refuse to acknowledge what really happened.” A Soviet war correspondent has said that, “It was an army of rapists,” that Russian soldiers raped every female from eight to eighty. The scale of the rapes that took place is suggested by the fact that about two million women in Europe had illegal abortions every year between 1945 and 1948.

Anne Fontaine’s (“Adore”), The Innocents (aka Agnus Dei) tells one personal story of the brutality of the “liberating” Red Army from the point of view of a young French doctor, Mathilde (Lou de Laâge, “Breathe”) caring for French soldiers at a nearby Red Cross hospital. Based on real events, recounted in notes by Red Cross doctor Madeleine Pauliac, Mathilde secretly takes time from her hospital duties to serve as a midwife for nuns at a Benedictine convent in Poland in 1945 that have become pregnant as a result of several visits by Russian soldiers. As the film opens, Mathilde is begged by the novice Teresa (Eliza Rycembel, “Carte Blanche”) to come to the convent immediately to deliver the child of Sister Zofia (Anna Próchniak, “Warsaw ’44”), who is near death.

At first reluctant, the doctor is moved by the pleas of the novice and quietly goes to the convent where she performs a C-section to remove the breech baby and save Sister Zofia’s life. Shortly afterwards, another nun, Sister Anna (Katarzyna Dabrowska, “The New World”), collapses and the truth is revealed to her that the nuns were subjected to the assaults by Russian soldiers who came to the convent on three separate occasions resulting in the pregnancy of six nuns and one novice. Giving assistance to the Abbess (Agata Kulesza, “Ida”) and her young assistant Maria (Agata Buzek, “Redemption”), the French doctor is sworn to secrecy to prevent the nuns’ pregnancy from becoming a blemish on the reputation of the convent.

The ordeal is a test for the nuns’ religious faith who must deal with the fear that they will be punished by God for failing to live up to their vow of chastity and Mathilde comes to respect that many of the nuns uphold their beliefs, even though many believe that God has abandoned them. More reflective than others, Polish actress Buzek is remarkable as Maria, a complex nun who admits that being a nun in these circumstances feels like “twenty-four hours of doubt for one minute of hope.” When Mathilde has her own close encounter with Russian soldiers who try to rape her at a roadblock, her bond with the nuns rises to a new level of empathy.

Though she was raised by Communist parents and is a non-believer, Mathilde develops a close relationship with the nuns and is moved by their devotional chants and returns to the convent each night to deliver the children of the remaining nuns. The Abbess tells Mathilde that the babies are taken to a sympathetic aunt but a deeper secret is hidden. A semi-love interest develops when Mathilde establishes a friendship with Jewish doctor Samuel (Vincent Macaigne, “Two Friends”), her medical supervisor who joins her at the convent to deliver the remaining babies and their engaging conversations are the film’s only light note.

The Innocents is a heartbreaking film that portrays a community that is helpless in the face of brutality and whose resolve is tested to the breaking point when a death occurs in the convent and the question of the disposition of the newborn children takes us to an unexpected dark place. Lou de Laâge is outstanding as the sensitive doctor whose compassion for others allows her to thrive in an uncomfortable situation and whose quick thinking saves the nuns from another encounter with the Russians. Her performance succeeds because she is also one of the innocents, those who are willing to give of themselves to others without standing in judgment.

One is reminded of the words of Mother Teresa who said, “If you are kind, people may accuse you of ulterior motives. Be kind anyway. The good you do today may be forgotten tomorrow. Do good anyway. Give the world the best you have and it may never be enough. Give your best anyway.” Though it is shot in darker hues and is often bleak, The Innocents is also an uplifting experience. 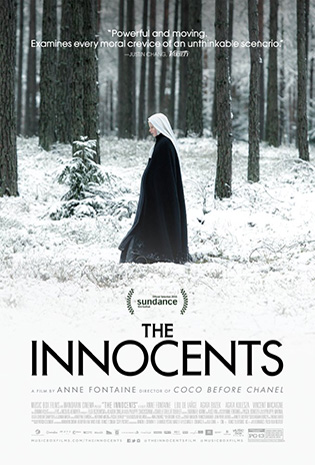