Well, that was upsetting.

The new documentary, Blood on the Mountain, about the coal industry’s insidious and nefarious relationship with the people and land of West Virginia, is an investigation into the corporate and political cover-up of a history steeped in exploitation and suffering. It’s also an indictment of the communities willing to trade that history and their futures for one more day in the mines. That’s the ultimate tragedy of the story. The coal industry has robbed the people of West Virginia of their past and future, but the people of West Virginia continue to look to coal to solve the problems of the present. The filmmakers, Mari-Lynn Evans and Jordan Freeman, detail the battles fought and the lives lost over the extraction of coal in Appalachia through interviews, archival clips and news footage, and after the roller coaster of shock, anger, and heartbreak they take you on, the only real comfort I was left with is the fact that Massey CEO Don Blankenship, the most despicable villain in cinema this year, is currently in prison, though even this turns out to be cold comfort as Blankenship will only serve a year for conspiring to willfully violate mine safety and health standards.

Blood on the Mountain introduced me to a history of corporate greed and destruction in the mountains of Appalachia that I was mostly ignorant of, though I should have known better. The coal industry historically controlled the people of West Virginia by having a hand in every aspect of their lives and by the mercenary enforcement of slave-like labor practices. When miners unionized and stood down the coal companies during the Battle of Blair Mountain, the federal government stepped in and sided with the industrialists, favoring capitol over human beings. Despite the passing of Roosevelt’s New Deal, the coal companies continued to exploit the miners by creating a state of constant fear and the spread of misinformation. Silicosis and black lung waited for those miners lucky enough to have a job, but there were always others waiting in-line to take the jobs of those that complained. More and more coal was the ultimate goal, and the safety and health of the miners and the mining communities was often an obstacle to that goal. As the corporations cut corners and local officials looked the other way, the human disasters mounted, like the Buffalo Creek impoundment failure that claimed 125 lives, injured a thousand more, and left over four thousand people homeless. That type of disaster is likely to happen again in the future as impoundments of toxic waste in the mountains have been neglected for decades.

The film also documents the endless parade of politicians that were paid off by the coal industry to lie, mislead, and absolve the industry of any responsibility. Many of them were indicted, but the coal industry forged on. Battles between the industry and the unions turned deadly, and when the industry couldn’t beat the unions over pensions and benefits, they just defaulted on those through bankruptcy, leaving tens of thousands of sick and dying coal miners with nothing. One former miner in the film who lost his pension through the industry’s immoral bankruptcy scheme can’t finish the interview because just talking is too much for his damaged lungs. Yet it’s those same people who turnout for the shameless corporate-sponsored rallies in the film that exploit patriotism and anger and turn it against government regulations. It’s those same people who scream at and threaten the environmentalists protesting the coal industry’s destruction of their home. It’s those same people begging the coal industry to bring back jobs for miners that have been replaced with more productive machines.

The jobs are gone. The coal is nearly gone. What next?

Blood on the Mountain is another excellent documentary in an excellent year for documentaries. It’s not a perfect documentary — it’s long and drags a bit in it’s repetitive gloom, and it doesn’t offer the audience any real direction for all the anger it elicits — but it’s a timely and necessary document, made even more timely and necessary in light of recent outcomes. The Rage Against the Machine song that plays over the final credits is jolting because it doesn’t match the tone or energy of the film that preceded it, though I think the sentiment is correct. We all should be outraged about what’s happening in the coal mines of our country and for the lives that have been stripped of a credible future by greed and corruption, so that the rest of us in America can consume more and more. That, at least, is one thing I hope all Americans can agree upon.

'Movie Review: Blood on the Mountain (2016)' has no comments 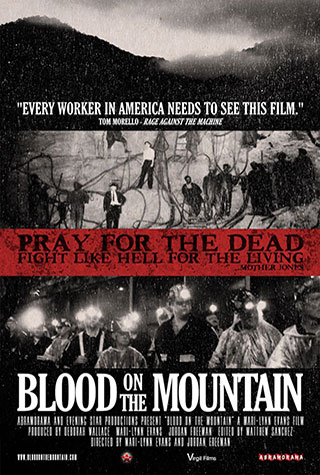