All nations share the same basic story — us versus them. The oldest of narrative conflicts, that story has been fundamental in the process of nation building and it’s an inevitable necessity if you’re going to set-up and patrol borders. National identity has always been tied up in the need to think of your side as the good guys and the other side as the bad guys. That conflict permeates everything and in popular media — especially news media — the story of us versus them is an essential element. In order to tell a story you must take a side, right?

Disturbing the Peace explores the “us versus them” conflict by examining a group of Israeli and Palestinian activists who have rejected that dichotomy. Founded by a group of former Israeli and Palestinian soldiers, Combatants for Peace uses art and peaceful protest to bridge the common humanity of both nations, something that has been missing from the traditional narratives of both sides. “It is indispensable for a fighting system to deny the humanity of the other side,” reflects one of the activists in the film. The group creates a safe space where soldiers and victims of the conflict can tell their own stories and engage in respectful dialogue and collaborative projects. The members of the group have all experienced great loss, have seen things they can’t forget, and have all done things they regret. That is their shared past, but they also share a vision for the future where they can live in peace through a two-state solution.

Of course, they are very unpopular on both sides of the divide.

Directed by Stephen Apkon and Andrew Young, Disturbing the Peace is a fresh and thoughtful look at a conflict few of us fully understand, including the people who live it every day. The first half of the documentary focuses on the stories of a handful of former enemy combatants, through personal interviews, news footage, home movies, and reenactments. The Palestinians found purpose and strength through violent resistance against an occupying force that treated them as subhuman. The Israeli soldiers found purpose and strength through protecting their homeland from terrorists threatening their peace and security. The Palestinians were forced from their homes and watched as friends and family members lost their lives in the struggle. The Israeli soldiers were forced away from their families as their fellow citizens were being killed in acts of terror back home. One of the former Palestinian fighters recalls seeing his brother gunned down in the street for disobeying a 5:00PM curfew. Another recalls the moment when she decided to commit a suicide attack and had to tell her daughter that they would never see each other again. A former Israeli soldier recalls watching TV footage of dozens of dead, mutilated bodies in Gaza, just minutes after giving the go-ahead for the attack. The intimacy and emotional honesty of these personal stories, along with the disturbing footage and reenactments, makes for a difficult but eye-opening experience.

The second half of the documentary shifts focus to the present and the work of Combatants for Peace. The filmmakers document the activists as they prepare for an art exhibit and a nonviolent protest along the wall that separates Israel and Gaza, which is the climactic scene in the film. Armed only with papier-mâché puppets, the members of the group meet at a point where the separating wall gives way to barbed-wire fence and narrows to just a stone’s throw between the two nations, Israelis on one side, Palestinians on the other. Soon enough Israeli soldiers show up and become aggressive towards the Palestinian protesters, who peacefully hold their ground with the support of their fellow Israeli protesters. In this moment the filmmakers focus their cameras on the soldiers, and through the barbed-wire fence it’s the soldiers who look trapped, imprisoned. This is a powerful metaphor as the documentary, and Combatants for Peace, offers a hopeful path to resolving this nearly century-old conflict.

Disturbing the Peace challenges the audience to reconsider their perceptions about the Israeli-Palestinian conflict, and it’s a powerful and affecting document in that regard. But this timely film also asks us to reconsider some notions we have about our own sense of national identity and the stories we tell ourselves about the other side. It’s been a good year for documentary films and Disturbing the Peace is another very good example. This is essential viewing for anyone wanting to understand the Israeli-Palestinian conflict from a human perspective, but also as a testament to the human capacity to forgive and the need for empathy.

'Movie Review: Disturbing the Peace (2016)' has no comments 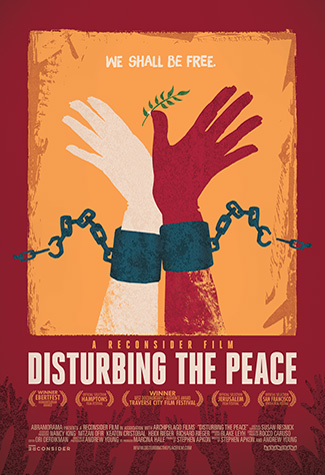