Part family drama, part mystery, part slapstick comedy, and part mad-scientist movie, Men & Chicken is one of the most bizarre and original films I’ve seen. Writer and director Anders Thomas Jensen combines all those elements like a mad-scientist himself, conjuring up an absurd story full of grotesque characters, and translates it on-screen in an unadorned, deadpan style. While some of those elements work better than others, the film manages to be funny and sad, at times very moving, often very revolting, and also a touching examination of what makes us human.

The set-up is typical enough: Two semi-estranged brothers are thrown together when they discover their parentage isn’t what they thought. The oddity is in the details, however. The oldest brother, Elias (an unrecognizable Mads Mikkelsen, “Hannibal” TV series), is an aggressive dimwit, who masturbates compulsively, and the younger brother, Gabriel (David Dencik, “The Homesman”), is an intellectual, with a sensitive gag reflex, and they both have cleft palates. They’re an unfortunate pair of misfits, but the performances of Dencik and, especially Mikkelsen, are so good that the brothers are tragically pathetic rather than just pathetic.

Elias and Gabriel are lonely men who have difficulty fitting into “normal” society. Gabriel, a professor, has found some comfort through the pursuit of knowledge, but the death of his father brings Elias uncomfortably back into his life. Gabriel is relieved when he discovers that Elias is in reality only his half-brother and he decides to seek out his biological father and the identity of his mother. Gabriel and Elias’ biological father turns out to be a brilliant geneticist and reclusive shut-in who fathered three other sons — all from different mothers and all with odd quirks and cleft palates — that live with him on an isolated island in a converted insane asylum. To Gabriel’s horror the new brothers are even stranger and more aggressive than Elias, which drives him on further to find his own mother and the answer to that nagging question: Who am I?

It’s difficult, but necessary, to avoid certain metaphors here, but Mads Mikkelsen’s Elias is a force of nature. I’ve been an admirer of Mikkelsen since “After the Wedding” and his performance in “The Hunt” is masterful, but this one might be my favorite yet. It’s quite unlike anything I’ve seen in movies. Ever.

Men & Chicken is Danish director Anders Thomas Jensen’s fourth feature film he’s helmed, though the first that I’ve seen. He’s well known, however, as a screenwriter, including “After the Wedding,” which is also about a family secret that reveals some awful truths. He also co-wrote the Academy Award-winning “In a Better World” and is one of the credited screenwriters of the anticipated Stephen King adaptation, “The Dark Tower.” Jensen is a great writer, both daring and humane, and proves also a very good director here with Men & Chicken. With it he is able to capture oddly sincere (or sincerely odd?) performances from his entire cast, and he’s able to effectively shift tones throughout the movie. He also uses the interiors of the insane asylum to great effect as an unending house of curiosities and horrors.

This film is seriously strange and macabre, but Jensen leads you through the madness with supreme confidence.

I don’t imagine Men & Chicken is to everyone’s taste, however. Few movies pack so much quirkiness into 104 minutes, and certainly not every oddity in Men & Chicken is created equal. There are far too many stuffed animal beatings, for instance, and the climactic reveal is pretty ridiculous, though I appreciated the mix of absurdity and poignancy of the denouement. Nonetheless, if you’re tired of uninspired summer blockbusters and dreading the onslaught of award-ready prestige films, as I am, then this movie will be a pleasant and grotesque respite. 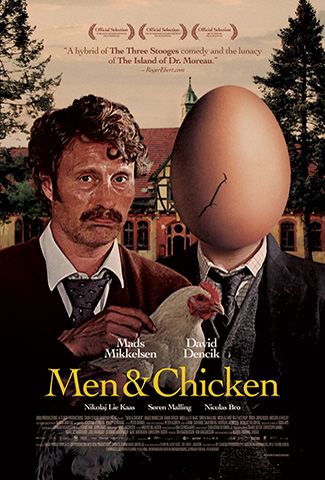