Hunter S. Thompson was an acclaimed author and journalist, though as memorable as his literature is, he also has a legacy for his lifelong love of alcohol, mescaline, LSD, and cocaine. And on February 20, 2005, when the drugs stopped supplying happiness, he shot himself to death. The suicide note read: “No More Games. No More Bombs. No More Walking. No More Fun. No More Swimming. 67. That is 17 years past 50. 17 more than I needed or wanted. Boring. I am always bitchy. No Fun — for anybody. 67. You are getting Greedy. Act your old age. Relax — This won’t hurt.” Judging from his novels, the same disillusionment that led to his demise was always with him.

Suitably, The Rum Diary, an adaptation of Thompson’s book of the same name, is Bruce Robinson’s first directorial effort in 19 years (he also does the screenplay). Much like the late author, Robinson first drew acclaim with a black comedy that he scripted and directed entitled “Withnail and I.” After the debut, he became tired of the restrictive practices in Hollywood, such as producers either refusing to fund his works or drastically altering them, eventually succumbing to heavy drinking and falling into a heavy depression, becoming “unavailable by choice.” It was Johnny Depp, who leads, that persuaded the writer to come out of retirement. Unfortunately, lack of focus and dull chemistries dampen a potential comeback.

Paul Kemp (Depp) is a novelist and American journalist who takes on a freelance job writing for a run-down newspaper in the Caribbean during the 1950s. The editor-in-chief E.J. Lotterman (Richard Jenkins) is on his wit’s end, blaming the lack of enthusiasm and alcoholism among his staff for the decline in readership (whom he tries to maintain by publishing only the most optimistic of articles). Even the employees, including a porky photographer-turned-Kemp’s sidekick named Sala (Michael Rispoli), agree that the paper is doomed. So, as the only person who’s applied for the job of printing horoscopes, Paul is hired (replacing a writer that was raped to death by sailors on the island). And while on assignment, he attracts the attention of Sanderson (Aaron Eckhart), a sleazy businessman interested in Kemp’s talents, and his foxy fiancée Chenault (Amber Heard).

A major theme in The Rum Diary is self-destruction. In the film, Puerto Rico is described as a “schizoid country,” because it adheres to two different lifestyles — American and native — but also because the lost souls that populate the shorefront are out to discover a sense of self, whilst subconsciously doing everything to avoid what they might find. Sanderson is a washed-up shark who tries running a real estate scam to cheaply open hotels on an isolated island and remains detached from Chenault, who, in turn, doesn’t care for her lover’s riches and starts to fall for Kemp, but refuses follow her heart. And the businessman only feels jealousy when she dances with another man, not because he necessarily loves her, but because his “property” is being taken away. Hypocritically, Lotterman complains about his team, but then exemplifies that same indifference. Paul, however, is on the crossroads of drunken infamy and righteousness.

Robinson struggled with his sobriety during production and relapsed while the crew was out drinking one night — these demons must’ve helped during the writing process, especially considering how personal his style is. And there’s a lot to admire about the script. Each character has a unique voice and the interplay is sharp and hilarious. There’s a lot of believable situational comedy that works in the context of the script, and Kemp is an incredibly well-thought out and likable protagonist. On the flipside, there are also a few weak spots, most distracting being the formulaic route that Paul and Chenault’s sparking attraction takes. In addition, some scenes, however funny they may be, don’t flow well or contribute the plot.

Brilliant casting somewhat atones these problems. Depp and Eckhart are the standouts in The Rum Diary. There is a glimmer in the actor’s eyes which doesn’t disappear until the end credits. Not just that, he was also the one responsible for recommending Robinson, even while talking to the late S. Thompson about a future adaptation years prior to his death, to which the author called the director’s involvement “a dream.” Whereas Eckhart retains his usual juxtaposition of charisma and creepiness, giving his best performance since “Thank You for Smoking.”

Had the film been polished more, it could’ve been great — benefiting from some genius dialogue and good acting. Though as it stands, it’s like that one neighborhood drunk whose ramblings, although hilarious, are also a tad murky. 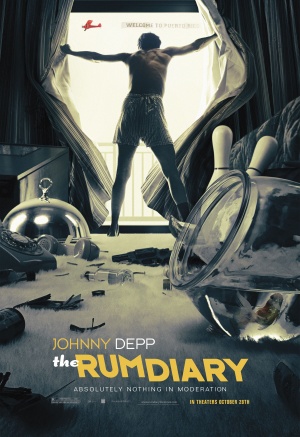