A sensitive loner goes undercover to infiltrate a group of skinheads and finds he may have more in common with the white supremacists he’s investigating than his FBI colleagues. Or “Donnie Brasco” meets “The Believer.” Or “Point Break” meets “American History X.” Or “Reservoir Dogs” meets “Romper Stomper.” I couldn’t help but think of other movies as I watched Imperium, starring Daniel Radcliffe as the FBI agent posing as a skinhead, partly because I wish Imperium were anywhere near as good as those other movies, but also because Imperium feels so much like a movie — full of stock genre characters and unbelievable plot contrivances. It’s also difficult not to think of Harry Potter, as I’m still not convinced Radcliffe has the ability to outgrow that role, and I’m not entirely convinced of Radcliffe here, either as an FBI agent or a white supremacist.

Radcliffe’s inability to fit comfortably in either role could have been a strength of the film, if the direction and script had been stronger. The film wants us to believe that Radcliffe’s character, Nate Foster, is in constant danger, always on the verge of being found out, if not for his quick wit and superior intellect. But I never really felt the stakes of the character’s situation. Each time Nate narrowly avoids outing himself — and this happens a lot — I never doubted for a second that he would escape undetected. Plus, the movie’s skinheads and white supremacists never seem that dangerous, though the director, Daniel Ragussis, makes ample use of disturbing archival photos to try and ratchet up that sense of danger. Compared to Radcliffe’s Nate, they come off as incompetent and uninformed about their own belief system that they’ve presumably dedicated their lives to, while Nate seems to have learned everything after a couple of late night cram sessions. Worse, we never feel the moral compromise forced upon the protagonist as he descends further into this world, outside of him occasionally having to use the N-word or raise his voice slightly. The best agent undercover movies, much like the best movies about extremists, show us how easily people can get seduced by these fringe tribes while their souls are destroyed by the need, or the job requirement, to be accepted into those tribes. Imperium doesn’t seduce us, however, and the director keeps us at a distance from this world, much as Nate seems untouched by his experiences.

There are some very good supporting performances, especially Tracy Letts (“The Big Short”), who is terrific as a Rush Limbaugh-like media firebrand who exploits the white power movement for personal gain. Toni Collette (“Krampus”) has some nice moments as Nate’s FBI handler, though her constant gum smacking is a performance choice I could have done without. Sam Trammell (“White Rabbit”) as a classical music loving, intellectual bigot is a standout, as well, and his scenes are the film’s most interesting. Trammell’s character is a family man living comfortably within the parameters of society, not on the outskirts, and the banality and rational mindset of his hate is much more terrifying than the in-your-face skinhead thugs or the fascistic Aryan Alliance. His wife and kids are onboard, too, and the movie earns some uncomfortable laughs with a batch of swastika birthday cupcakes. The filmmakers aren’t afraid to drastically shift tones like this from tense thriller to black comedy, but that style is inconsistent throughout the movie. The director moves the story along at a suspenseful pace, but there are far too many close calls and narrow escapes for it to be very effective. The cinematography is unobtrusive and appropriate to the story. The FBI office sets are a tad under-lit and under-designed, but the worlds of the white supremacists are well crafted, though they come straight from every other skinhead movie — death metal clubs, pickup trucks, and isolated compounds. The score is bass-heavy and often distracting, especially in the early scenes of the movie, but it’s less involved later in the film, fortunately.

Imperium is an uneven but thoughtful movie that attempts to understand the appeal of this particular brand of hate and how ordinary people can get wrapped up in violent, racist rhetoric, which is a depressingly timely subject. The filmmakers avoid glorifying the world while also not simplifying or condemning it’s characters. Unfortunately the movie doesn’t get any closer to understanding the world or it’s characters in a dramatically satisfying way, and the contrivances of the plot continually derail the movie’s most interesting details and story threads. If you’re a Daniel Radcliffe fan, you’ll probably be shocked to see Harry Potter as a Nazi saluting skinhead, but you may not find anything particularly surprising about his performance. Imperium is far from essential, but it may be worth seeing for it’s timely subject matter and a good supporting cast. 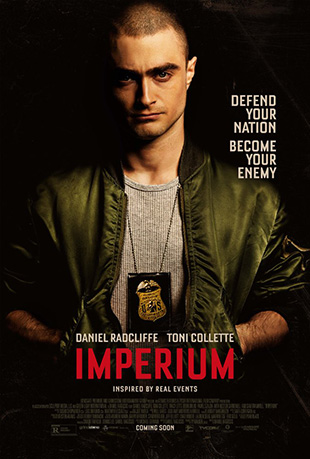