In Der Bunker, a young student heads to an isolated home to carry out research in solitude. When he arrives, however, he finds that the lake-view home is actually a bunker. That turns out to be the least weird turn of events in the film, a gleefully oddball drama-comedy that seems to crib from both David Lynch, David Cronenberg, and the Coen Brothers in terms of theme and atmosphere.

The unnamed Student (Pit Bukowski, “Der Samurai”) just wants to work on a theory regarding the Higgs boson particle. You know, real quantum-physics stuff. His room in the bunker is positively spartan, with a small bed, nightstand, and desk. It really does look like the kind of place one would use to wait out a bombing raid. There’s no lakeside view either. The whole place is underground. But it’s quiet, so he pays what he can for rent and tries to be optimistic.

The also-unnamed Father (David Scheller, “In the Shadows”) is the first to greet the Student and to show him his luxurious new abode. Something seems a little off with the Father, though. Could it be that he’s actively tracking how many napkins and extra dumplings the Student consumes or uses? Could it be his overly solicitous nature? At the dinner table, the Student meets the unnamed Mother (Oona von Maydell, “Chaostage”), a beautiful — if a bit imperious — woman who dotes on the couple’s young son, Klaus.

And what of Klaus (Daniel Fripan, “Krabat and the Legend of the Satanic Mill”)? At that first meal, he’s outside, being punished for not learning things. He’s home-schooled, you see, and the parents are at their wits’ end on how to make him smarter. Because they’re grooming him to be President of the United States, even though he was born in Germany. They’re convinced that Klaus is very, very smart indeed.

When we and the Student do meet Klaus, we’re in for a bit of a surprise. We’re in for a bigger one when the Student is persuaded to pay off his “debt” (rent) by tutoring the boy himself. To be blunt, Klaus is no smart little boy at all. Nope, not at all.

And that’s not even the weird part about Der Bunker. There’s something unsettling about the Mother as well. Might be her bad leg, which seems to talk to people when you touch this odd mark on it that sort of looks like a burn that’s gone untreated. Yes, you read that. The leg talks to people. As legs do. The leg is very, very interested in Klaus’ prospects and wants to see the lad succeed in life. Presumably that’s why Klaus is being placed on the path to the presidency. Talk about high hopes and unreal expectations!

From a certain perspective, the movie looks like a farcical romp, the kind that the French are so well known for. But this is a dark, dark movie with ladles full of creamy comedy dolloped onto an otherwise straightforward plot. Our poor, naive Student! You really feel for the lad as he has to deal with this trio of strange strangers.

Der Bunker has its moments of shock, as we move with the Student through the home’s claustrophobic rooms, but they’re not there merely to dazzle us like a bright light for a caffeinated kitty; they — by way of writer-director Nikias Chryssos and cinematographer Matthias Reisser — exist as dust motes floating within the sunbeam that is the plot of this bizarre, yet understandable — and even relatable — film. 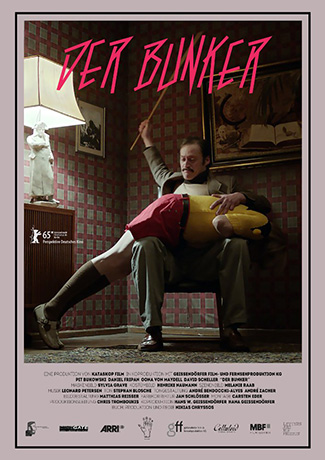