Anyone who has read my reviews with any sense of regularity will know that when confronted with a remake or a reboot (which seems to be the norm and not the exception in Hollywood today), I always return to the source film for guidance. These projects usually fall into two categories, a) an improvement upon the original work, or b) a totally unnecessary waste of time and resources. Well, friends, you can put Ben-Hur, which is actually the THIRD go-round for this movie (based on the 1880 novel, “Ben-Hur: A Tale of the Christ,” by Lew Wallace), as firmly in the latter category. It’s a motion picture so audacious and bloated that it took two major studios (Paramount and MGM) to produce it; and direction and acting so abysmal even Adam Sandler cringed when he read the script. It’s a remake absolutely NO ONE (at least anyone who would admit) has been clamoring for and certainly no reason for anyone with an IQ above 78 should actually pay to see, except as a curiosity piece.

There are probably 11 reasons I could give why the first one was a better movie and, coincidentally, those are the same number of Academy Awards the 1959 version captured, including Best Picture, Best Director (William Wyler), Best Actor (Charlton Heston, although I would have chosen Jack Lemmon in “Some Like It Hot” myself), Best Supporting Actor (Hugh Griffith), Best Score (Miklós Rózsa), and Best Cinematography (Robert Surtees), to name just a few.

In this latest edition of Ben-Hur, director Timur Bekmambetov (“Abraham Lincoln: Vampire Hunter”) is goaded by scriptwriters Keith R. Clarke (“The Way Back”) and John Ridley (“12 Years a Slave”) to make the two main characters, Judah Ben-Hur (Jack Huston, “Pride and Prejudice and Zombies”) and Messala Severus (Toby Kebbell, “Warcraft”) adopted brothers instead of best friends growing up in the dust of Jerusalem of around 26 BC. The former a Jewish prince, the latter a pagan orphan who follows the glory of Rome and advances to become a leader of a garrison stationed in Jerusalem. Bekmambetov also think it prudent to remove any inkling of Rózsa’s wonderful musical score, but more about that sin later.

Being adopted, Messala’s feelings for Judah’s sister Tirzah (Sofia Black-D’Elia, “The Immigrant”) are a bit creepy, and forget ANYTHING nice about Ben-Hur’s mother, Miriam, played with infinite sweetness in 1959 by Academy Award-nominated Martha Scott. Here, though (as portrayed by Ayelet Zurer, “Angels & Demons”), she is a harpy whose only concern seems to be keeping her daughter way from the grubby orphan. Feeling as an outsider in this prominent Jewish family, the put-upon Gentile takes a powder to join the legions and ends up becoming the right hand man of Judea’s Roman governor Pontius Pilate (played by a not-so great Dane, Pilou Asbæk, “Lucy”).

As such, he returns with all honors and glory and reunites — briefly — with his family. He then tries to force Judah to rat out the local zealots who are giving the occupation soldiers a hard time (not everyone loves Roman rule, you know, but the conflict was more interesting as told in the Monty Python comedy “Life Of Brian” than it ever was in this film). Anyway, Judah refuses to name names and, when a demented and dreadlocked young rebel, Dismas (Moises Arias, “Ender’s Game”), that Judah has been hiding fires an arrow at Pilate, all heck breaks loose and Judah and family are arrested. Mom and sis sentenced to be crucified (the Roman answer to EVERYTHING), while he is sent to the galleys. This part of Ben-Hur is also given short-shrift as the whole rescuing of the Imperial admiral (Jack Hawkins in ’59) is omitted with a sea battle lasting all of four minutes.

After this (five years has evidently elapsed by this time), Judah washes up on an African beach and is taken in by Ilderim (Morgan Freeman, “Now You See Me 2” and the closest anyone in this cast will get to an Oscar for a long time), who just happens to train horses for chariot races. This, of course, is the plot point that sets up the third act as it seems Messala is ALSO a chariot racer, so Judah gets the chance to win the big race AND gain revenge at the same time.

From here, it’s just paint by the numbers to get to the not-really-so special effects of the chariot race (which in the original picture lasted only about ten minutes, but is doubled for your pleasure today). Knowing that the 1959 race sequences cost more than $2 million (a considerable amount at the time), employed hundreds of stunt men and coordinators and was bolstered with Rózsa’s majestic “Parade of the Charioteers” music, it’s quite disappointing to see this green scene version which epitomizes blandness in its most basic form. There are thrills and spills, of course, and the set design and cinematography by Oliver Wood (DoP of the original “Jason Bourne” trilogy) at least makes things look halfway decent and somewhat realistic, but knowing much of it is only digitized computer effects takes a lot away from my pleasure, anyway.

As for Rózsa, he’s been discarded in the ash heap of orchestral history and replaced with a truly horrid singer, Andra Day, whose closing song, “When Will It End,” or “What’s Gotta Give” or “That’s the Way It Is” or whatever, is so blank and unmemorable I swear that if you offered me a million dollars or held a gun to my head, I could not tell you the title or remember the tune just after hearing it.

Now for the acting. Well, at least Huston and Kebbell are appropriately muscular for the roles, although neither could puncture a wet paper bag with any of their thespian talents. Everyone else is effectively Middle Eastern, which I suppose is a good thing in a production about the Middle East. Then we have the workmanlike Morgan Freeman spouting his often annoying and unnecessary platitudes that might fit well today, but are just plain silly in first century Palestine (I guess we can blame that on Clarke and Ridley too, though). With such huge faults (more examples: The closing credits are made to appear like racing chariots, as well as dialogue that uses such words as “wow” and phrases like, “Are we having fun yet”) this entire enterprise makes both the 1925 and 1959 versions look like “Citizen Kane,” which they certainly were not.

Keeping the Jesus theme alive, though, Judah runs into the Messiah (Rodrigo Santoro, “Focus”) several times, while being told to love, not to hate and not to seek revenge, but he doesn’t listen. Still, the film concludes with an unsatisfying and misplaced “happy” ending, while several miracles do occur upon the Crucifixion. Unfortunately, none of these miracles can save Ben-Hur from the critics and especially the movie-going audience, for Heaven’s sake . . . 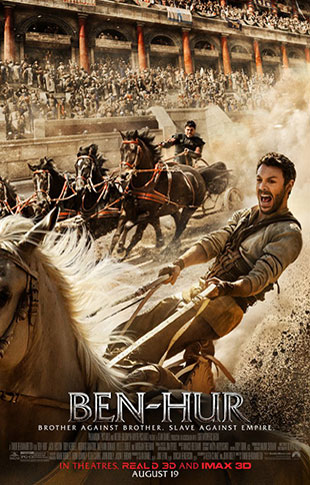