Every once in a while, there are films that reaffirm their genres. That’s not to say that they’ve suffered without them, but true gems are few and far between. I consider “Let the Right One In” to be one of these gems among the horror sub-genres. I’d consider Spike Jonze’s “Her” a contender for romance, even sci-fi. Kubo and the Two Strings, as directed by the President and CEO of stop-motion animation studio Laika himself, Travis Knight, not only affirms the need for animated films, but great fantasy as well.

The film follows the titular Kubo (voice of Art Parkinson, “San Andreas”), a young boy who is warned by his mother to never stay out after dark, or his aunts and grandfather the “Moon King” (voice of Ralph Fiennes, “Hail, Caesar!”) shall steal his remaining eye, as he did the first when he was an infant. When he inevitably stays out after dark, Kubo is sent upon a quest to retrieve three magical items in order to protect himself. He is joined by Monkey (voice of Charlize Theron, “The Huntsman: Winter’s War”) and the samurai-bug hybrid Beetle (voice of Matthew McConaughey, “Interstellar”) who defend him as well as help harness his abilities. I’m painting broad strokes here because there’s a lot to give away and it’s best to enjoy all the surprises Kubo and the Two Strings has to offer.

Laika has always excelled at stop-motion animation, but their efforts here are nothing short of breathtaking. From aesthetic, to Monkey’s hair, to the excellent (but not excessive) action sequences. This is one of those cases where a film works best in animation, and were it a live-action film, it would be a downgrade. It even includes the largest stop-motion puppet ever used in an animated film like this. You’ll know it when you see it.

Eastern influence on western animation is nothing new. “Samurai Jack” and “Avatar: The Last Airbender” are among the better examples of this, but authenticity is not an easy thing to project. Too many times have animated films or series taken liberties from a particular style without truly understanding the cultural foundation. Or in worst cases, doing it for the sake of pandering to that particular demographic. Kubo and the Two Strings is not rich with style, it is a primary function in and of itself.

Beyond the film’s visuals, it also manages to tell a well-rounded story, which doesn’t talk down to younger audiences. There are dark sequences in this film for children to see — it feels like a film from another time, when we could respect a child’s intelligence and threshold for more serious subject matter. Though it’s not without it’s problems. There are three twists within the film and two of them are pitifully obvious and far too easy. The second of which makes the progression of the story and events far too convenient, though it does disguise this with a clever plot device early on. It also falls into the trap of contriving the protagonist into a master of his or her particular skill so we can get the final confrontation underway.

None of these hamper the big picture, but they are notable sticking points in an otherwise faultless product. The cast is commendable, though there were times when the celebrities’ inexperience with voice work began to surface. That being said, in a world where celebrities are given voice work better suited to far more experienced voice-over artists, this is a cut above the norm. Charlize Theron especially shines as Monkey, and her interactions with Kubo are among the most touching as well as funny.

Most importantly, this film knows when to breathe. There are scenes for the characters to rest, and for the audience to absorb the atmosphere, appreciate the beauty. The first act in particular eases you into the world and intelligently establishes its rules. There is no forced, cringe-worthy humor like seen in “Ice Age: Collision Course.” Yes, like that feature, there is a comic relief character who comes in the form of Beetle here, but at no point does he become overbearing or obnoxious.

And because of this, I fear this film might be too . . . sophisticated. Kubo and the Two Strings is the type of film, that despite its abundant qualities, may not fair well at the box office compared to more pandering animated outings (without naming more names). This reminds me of the financial shortcomings Studio Ghibli often struggled with before it closed its doors. I’ve been wrong before, though, and hope to be again.

While I feel like “The Boxtrolls,” Laika’s previous outing, was an underwhelming follow-up to the excellent “Coraline” and even better “ParaNorman,” they’ve more than made up for it. Kubo and the Two Strings is not only the best animated film of the year, but undoubtedly the best film I’ve seen all year as well. If they can keep this up, then we’re in for a world of innovative wonder. More like this, please. 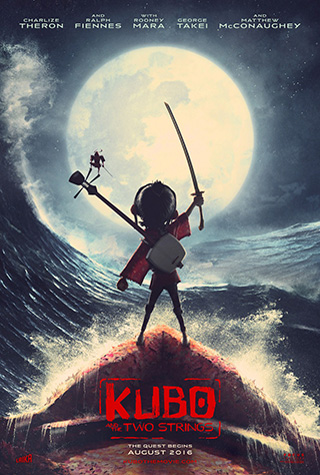