In Sun Choke, Janie (Sarah Hagan, “Spring Breakdown”) is just trying to get well, and while undergoing psychological treatment administered by Irma (Barbara Crampton, “You’re Next”), she’s making progress. She practices yoga and breathing exercises, she drinks blended green drinks for nutrition, and she’s working on keeping herself calm and focused. Though she’s been staying in her home for an extended, unspecified amount of time, she’s now well enough to venture outside for a few hours a day, and this helps her to feel more like herself.

One afternoon, she spots a pretty brunette as she’s driving along, and decides to follow her. Once she determines where the young woman lives, she returns day after day, and begins tracking her every move. In one instance, Janie falls asleep in her car outside the house and is discovered by the woman, who knocks on her window in concern. Janie is thrown, but recovers enough to tell the woman, who introduces herself as Savannah (Sara Malakul Lane, “12/12/12”), that she’s just waiting for a friend. However, her obsession intensifies as Janie peers into Savannah’s window at night, uses her hidden spare house key to stealthily enter Savannah’s home, and even tracks down Savannah’s boyfriend’s home. Each day, she returns home later and later, and Irma, her caretaker, becomes more agitated about her adventures. She warns Janie to be careful, because “there are a lot of ways this world could hurt you.”

Irma’s treatment of Janie is intense (while strangely unclear); there are therapy/punishments that involve Janie lying on the couch reacting in the form of seizures to the high pitch of a tuning fork and Irma’s yoga sessions are extreme and forceful, rather than relaxing and focused. It doesn’t appear that Irma is a healthcare professional of any kind, but the established situation is never fully explained. As Janie begins to feel more and more like herself, she starts separating herself from Irma’s grasp, despite Irma’s warnings that these behaviors are what led to her illness concerns before. Irma forebodingly tells her that she promised Janie’s father years ago that she “. . . would spend the rest of my life worrying about you and caring for you, whether either one of us likes it.”

I think you see where this is going.

Sun Choke is a potent thriller that moves slowly, yet cuts deeply. Written and directed by Ben Cresciman, the film chronicles the simple tale of a woman struggling with her psychological identity and existence, and mainly exhibits scenes through her distorted points of view and tension-laden experiences. Inside her home, you worry for Janie who comes across as meek and battered at the hands of Irma; however, in the outside world, she gathers her strength and boldly violates the sanctity of Savannah’s privacy time and again. Sarah Hague is extraordinary as the enigmatic Janie, vacillating between a timid woman who answers to “little girl” in her home and an authentic, on-the-brink threat to a kind stranger just trying to be friendly. Her center-parted straight brown hair and icy blue eyes pierce whomever she speaks with, and her descent into psychological breakdown is truly chilling.

The film boasts well-executed technical elements as well. The sound design is masterful, blending a haunting original score by Bryan Hollon and the enhancement of everyday ambient noises by sound mixer Amanda Beggs. The tinkling of broken glass, the slosh of feet walking through puddles, and the swish of clothing all shout through the speakers, adding to the palpable tension. Cinematographer Mathew Rudenberg represents Janie’s weakening grip on herself through medium long shots that accentuate the isolation she feels in her own home, and editor Jason Jones wields a variety of rapid-fire extreme close-ups to amplify Janie’s increasing confusion at the stimuli she encounters, both inside and outside her mind.

While the action of Sun Choke is mostly subdued, it’s engrossing and fascinating, driven by outstanding performances by its lead and supporting actresses. There are elements of the backstory that are left vague and unexplained, but the film leaves a definitive impression on the viewer. The characters and situations latch onto you and refuse to give in, mirroring Janie’s obsession and degrading stability. It is a truly disquieting psychological piece that you won’t soon forget. 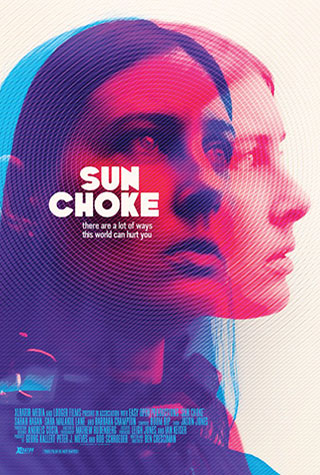