“Original” would seem the last word one should use to describe a current kids’ movie about the friendship between a boy and his dragon that is both a remake and a sort of “E.T.” clone, but it is what it is. As Disney is knee-deep in pillaging their catalog of classics for profits, they’ve managed to find a true gem. David Lowery’s take on Pete’s Dragon is a magnificent meditation on family, friendship, and the role that innocence plays in our lives. It’s a languidly paced, nearly plotless, tenderly moving portrait that trades the whiz-bang noise of most modern children’s movies for a longing look and a dramatic maturity.

Opening with a prologue that is so simple and concise and yet so powerfully poetic, Pete’s Dragon uses only a couple lines of dialogue and some exquisite imagery to establish the movie’s blend of fantasy and reality. A boy loses his parents, but gains a dragon. Years later, Pete (Oakes Fegley, “This Is Where I Leave You”) has lived more than half his life in the forest surrounding the town of Millhaven with his big green buddy Elliot.

Understanding that the relationship between Pete and Elliot is key to the movie’s success, Lowery takes his time observing the two pals in their (almost) natural habitat. The movie speaks of adventure early and that’s what Pete and Elliot’s life together appears to be. The only narrative purpose these moments of wild, free-flowing fun serve is to immerse us in the minutiae of the picture’s main relationship and that allows Lowery to build an emotional core right from the start.

What little plot the movie has is lurking around the corner from this, but Lowery and his co-screenwriter Toby Halbrooks refuse to move ahead until they feel the time is right. Considering the speed with which kid-aimed movies propel their narratives forward nowadays, the calm patience of Pete’s Dragon seems roundly refreshing.

Also welcoming is this picture just doesn’t behave like normal kids’ movies. There’s an environmental message, but it’s subtle and never preachy. There’s a villain, but he’s actually a pretty nice guy in the end. There’s humor, but it’s light and honest, never quick and aggressive. It all adds up to a particularly gentle treatment of a touchingly heartfelt tale, one that concerns itself with adventures, legends, and the power of imagination while maintaining a meaningful, believable look at childhood hopes and fears.

These worlds clash when friendly park ranger Grace (a surprisingly wonderful Bryce Dallas Howard, “Jurassic World”) finds Pete in the forest and brings him into town with plans to locate his family and figure out why he was in the forest to begin with. Grace links us to all the other significant characters, including her sagely father Meacham (Robert Redford, “All Is Lost”) and her soon-to-be step-daughter Natalie (Oona Laurence, “Southpaw”). They all take a liking to Pete, but Lowery wisely takes his time building the relationships. Aligning the movie’s dramatic flow with Pete’s feelings is a primary focus.

At one point, shortly after being supposedly rescued by Grace, Pete slips out of a hospital room and makes a mad dash through town in hopes of returning to Elliot and the woods. It’s a sequence that most directors helming a kids’ picture would turn into a burst of energetic action, an excuse for thrills. As Pete’s disappearance is discovered, a chase begins, further suggesting that Lowery will opt for edge-of-your-seat excitement. But instead, he commits to lyrical emotionality, capturing Pete’s feelings ahead of his actions. A sweet song plays over the sequence that also includes some quality moments of slapstick humor and it becomes abundantly clear that Lowery doesn’t direct family entertainment like anyone else.

There’s still action in the sequence, including Pete climbing atop a moving bus and jumping onto the roof of a car, so it’s not like Lowery isn’t trying to keep the kiddies entertained. But there’s a melancholic tone and a poignant personality that comes to life in this sequence and establishes rather stunningly that this is a movie built of heart, not of commercial interests. It’s modest about its uniqueness, but it’s certainly one of the most creatively driven features to emerge under the Disney banner in years.

Pete’s Dragon is also unabashedly old-fashioned. Never mind that no one ever touches a smart phone or even references the Internet, that the only media shown in the movie is a scratchy car radio, a record player, and a worn old book. That’s intriguing if you’re specifically attending to modern technology in children’s entertainment, but Lowery goes beyond.

The old-fashioned qualities here are more tied to a complete lack of adult jokes, a refusal to pander to any age group, and the total ignoring of so much as a hint of modern pop culture iconography. Mainstream kids’ movies have become an exercise in audience segmentation, bits doled out to adults and pieces doled out to kids. But Lowery returns his movie to the magic of early Disney when audiences young and old were treated as one. It’s a fitting achievement considering the movie’s main theme.

Pete’s Dragon is about innocence lost by children and regained by adults. The end is not the end. Wonder is not out of anyone’s reach. As Lowery’s movie so eloquently states, at some point, children have to grow up, but adults don’t have to be only grownups. Disney movies have long since subscribed to the notion that everyone can be a kid again with a sprinkling of cinematic magic, but Pete’s Dragon modifies the message: It’s not about reclaiming one’s youth; it’s about understanding that innocence is attainable for all ages, however briefly. We are bound by our own experiences, feet on the ground, but while we must eventually grow up and move on, that doesn’t mean we can’t occasionally soar. 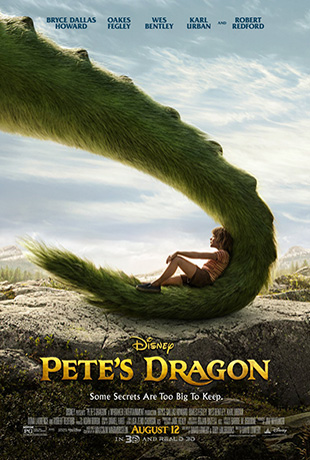