Writer-director Jayro Bustamante’s absorbing and revealing debut feature, Ixcanul, paints a disturbing portrait that crosses the fine line between tradition and exploitation in the name of the Guatemalan children sacrificed to uphold economical expectations among other considerations. The indigenous existences of children globally are jeopardized through ritualistic justifications that many find vehemently inexcusable and horrifying.

Bustamante’s stark narrative focuses its concentrated lens on the plight of a 17-year old Guatemalan girl earmarked for marriage by her poverty-stricken, working-class Kaqchikel parents living at the base of an active volcano. Ironically, the only true element that is systematically explosive about Ixcanul is not the proximity of the aforementioned volcano, but the voiceless and powerless minor that does not have a decent say about the psychological and physical loaning of her body to the highest child-exploitive bidder. Unconscionable and regrettably humanistic in tragedy and deemed practicality, Ixcanul is strikingly hypnotic and forceful among the nearby ominous alert of lava-spewing anticipation.

The film’s title is the name (or translation if you will) of the intimidating volcano that serves as the harrowing backdrop for timid teen María (María Mercedes Coroy) who is officially “put on the market” as the-bride-to-be nervously awaiting to be hitched. Currently, María — with the looming reminder of the volcano overshadowing her meek frame — works on the coffee plantation that her parents Juana and Manuel (María Telón and Manuel Antún) oversee routinely. The agenda is rather self-explanatory . . . María’s folks hope to wed her off to their wealthy businessman boss Ignacio (Justo Lorenzo) for obvious, opportunistic financial gain. María, curiously sexual in experimentation, however, has genuine affections for childhood sweetie Pepe (Marvin Coroy). Both youngsters fantasize about leaving their restrictive rocky surroundings behind for the preference of escaping to the United States. Soon, María’s dalliances with Ignacio create chaos and controversy (read as: Pre-marital pregnancy) that impacts her and her family’s monetary arrangements. Seemingly, the Ixcanul feels like a massive and menacing wall shielding María from the rest of the open, flexible world.

As much as María would like to desperately break out of her confining shell and buck all the traditional trappings that she is destined to follow, she is a necessary slave to the demands of her familial protocol. After all, how can María walk away from the enforced world of arranged marriages, agriculture and livestock, capitalism, unexpected pregnancy and assuming the reluctant role of a desperate family’s ready-made profitable commodity? When María is subjected to wearing her wedding garments in quiet protest we feel utterly helpless to rescue this child from inevitable turmoil and despair. The sadness and indignation states it all in Maria’s soft, dejected eyes.

In many ways Ixcanul is a harsh coming-of-age ancestral straight jacket for this young girl’s deprivation in experiencing her blossoming womanhood on her own gradual terms. Bustamante’s exploration and examination of his homeland’s antiquated Guatemalan cultural norms affecting the psyche of a demure highlands child wallowing in silent hopelessness is eye-opening on many levels. This candid exposition balances its tug-of-war topics with solid conviction. Perhaps Bustamante swings at too many sentimental dilemmas at once without narrowing down his angst-ridden meandering to where it truly belongs — on the fragile shoulders of his burdened farm girl? Nevertheless, the contrasting symbolism of ancient customs and modern-day curiosities and using the mighty Ixcanul as an interesting metaphor for the intimidating obstacle fending off worldly progression and freedom really captures the inner torment of sheltered societies that rely on historical belief systems.

Ixcanul is beautifully shot and the film’s exotic surroundings all possess the scenic wonderment highlighted by the spacious crystal blue sky scraping the volcano’s colossal peak. The colorful terrain, animals, religious superstitions, vegetation and of course the presence of humanity that reinforces the perceived ethnography are all cohesively stunning and surreal. The actors, at least the majority of them anyway, all make their on-screen debut in Bustamante’s visually stimulating and observational foray into the mesmerizing machinations of Guatemala’s Mayan community. Specifically, the film’s lively pulse belongs to the mother-daughter tandem of Coroy’s María and Telón’s Juana because there is supposed to be a sacred bond where a mother’s protection is constant. Actually, Juana is protective of her little girl and wants the best for her although María’s marital riches spells relief for the entire clan. Juana is just as disillusioned, but she is disciplined by her country’s local rituals and needs to ensure that Maria dutifully walks along the same traditional trail. As the monolithic mass that blocks our peasant girl’s (as well as her people) fascination with what is on the other side of the volcano oddly acts as its own beastly barricade of a supporting character essential to the foundation of the film’s turbulence and tenderness.

Thankfully, Guatemalan filmmaker Jayro Bustamante has crafted an impressive and introspective debuted gem that fuels honesty and a compelling brand of insight tip-toeing through the tunnels of cultural triumph and tragedy. Indeed, Ixcanul spreads its volcanic ashes with powerful, hypnotic aplomb. 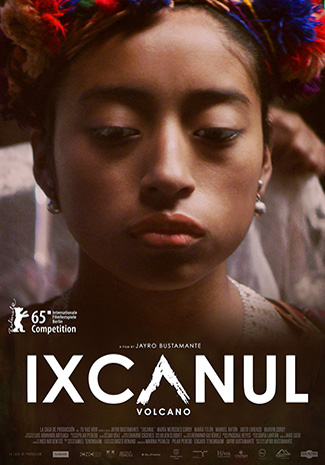