It is a reunion of sorts for those connected to the witless cop caper Spenser Confidential. First, the film’s star, Mark Wahlberg, returns home to his beloved Boston as the famed native son struts his reckless stuff around Beantown. Second, the film’s director, Peter Berg, reunites with Wahlberg, his “Mile 22,” “Patriots Games,” “Deepwater Horizon,” and “Lone Survivor” leading man, to bring the so-called wackiness to this action-packed Netflix toothless joyride. New Englanders may be thrilled their Hollywood hotshot is again gracing the streets of the Hub where notable accents and Red Sox fans reign supreme. As for others, this charmless action-comedy suspense piece will result in yet another disposable salt-and-pepper buddy flick aiming for low rent chuckles.

This derivative vehicle, however, isn’t dreamed out of thin air, it is based upon the Boston-based 80’s TV private eye drama “Spenser For Hire” whose Spenser character was created by novelist Robert B. Parker. And like the show, this rendition has Spencer rambunctiously causing havoc throughout the streets, only this time, the ex-cop/ex-con is on a manic mission to solve the murders of his ex-law enforcement colleagues. It should be noted, Wahlberg may have the Boston bloodline that is authentic in bringing Parker’s crime-solving creation to the big screen, but the heart and soul of the Spenser role truly belongs to the late Robert Urich’s genuine portrayal.

Further, a laundry list of every overwrought cliché imaginable can be found in Spenser Confidential. Corrupt cops, mismatched buddies, labored action sequences, hammy acting, recycled jokes, tired sight gags, exaggerated speeding cars, and many more all have a home. Evidently, Spenser Confidential does not miss an obvious beat in its strained rollicking, arbitrary rhythms. It’s woefully patchy and convoluted, and actor-turned-director Berg really has nothing distinctive to show other than to allow Wahlberg to prance all over the urban Boston streets he knows all too well. This aimless actioner excels in its unforgettable foolishness.

Supposedly, though, Spenser is a badass in the sense that he rubbed his fellow officers the wrong way. Freshly out of prison, the bothersome Spenser wants to chuck all the bad memories of Boston behind him. He ends up staying with old friend and mentor Henry (Alan Arkin, “Going in Style”). Henry, a gym owner and boxing coach, is currently taking under his wing a promising amateur in Hawk (Winston Duke, “Us”). Thus, Hawk — a former ex-con as well — is forced to co-exist with Spenser under Henry’s roof and it does not take long for Hawk to become the anointed (and exasperated) sidekick and partner-in-crime to Spenser. Also welcomed into the fold of the misadventures is Spenser’s ex-girlfriend Cissy Davis (Iliza Shlesinger, “Instant Family”). Additionally in the sordid mix is a retired crime reporter (Marc Maron, “Joker”). With the cast of characters at the ready, the berated ex-cop Spenser and aspiring MMA fighter Hawk (not a fan of speedy transportation or junk food) are off to the races as they attempt to solve the murders of Spenser’s policing pals.

The collaborative efforts of both Berg and Wahlberg (both sharing co-producing credits as well) do bring some “Boston Strong” vibes to outsiders observing the familiar Beantown subculture that includes the, “I pahked the cah in Hahvud Yahd” accented lingo and the featured visibility of ubiquitous Dunkin Donuts venues that one can easily swing a dead cat at and hit. The pedestrian banter between Wahlberg’s Spenser and Duke’s Hawk feels needlessly contrived and gimmicky, and neither seem particularly clued in to care what the murder mystery entails within the stillborn storyline. Veteran performers in wise-cracking Arkin and Colleen Camp (“American Hustle”) are true gamers for showing up to this popcorn piffle of an actioner, while Shlesinger’s grating gal-pal Cissy simply adds an extra insufferable presence. Random swinging fists, flashy gunplay, and other face-off confrontations are cartoonish and staged. Overall, the meathead mayhem orchestrated is about as welcoming as an obnoxious New York Yankee heckler situated in Fenway Park’s Green Monster bleacher seats.

Clearly after this mindless and monotonous jam session, the Berg/Wahlberg duo needs to step back a bit and assess the duds that they have engineered thus far; comfort level with one another should not be the only factor weighed while determining projects. Bostonians (and the entire movie-going public, in fact) want a winning combo and it is safe to say that Berg and Wahlberg are not exactly the Bill Belichick/Tom Brady of the movie industry involving exploits in and around Beacon Hill. 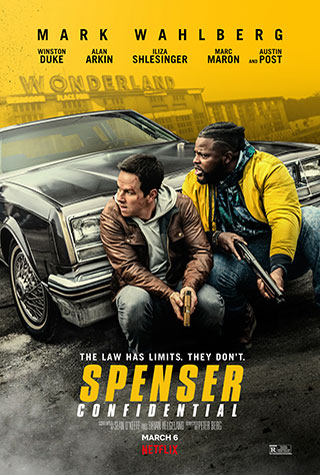