“Everywhere is the wind of heaven; round and above all are boundless sea and sky, infinite space and a great silence” — Katherine Routledge

The familiar saying attributed to Charles Dudley Warner that “Everybody complains about the weather, but nobody does anything about it” is turned upside down by Japanese director Makoto Shinkai (“Your Name”) in his latest animated film, Weathering With You (Tenki no Ko), a follow-up to Shinkai’s “Your Name,” one of the highest grossing anime films of all time. Focused on young love engaged in a determined battle against the power of nature, the film is set in Tokyo during a record-breaking rainstorm that has lasted for months and has caused widespread flooding. It is the story of a young girl known, in Japanese mythology, as a “weather maiden,” one who has the power to affect the weather through the force of her prayers.

Supported by cinematographer Ryosuke Tsuda (“Beautiful Bones: Sakarako’s Investigation” TV series), each individual rain droplet is gorgeously displayed on every surface, and the sound of the rain on walls and glass reverberates throughout the theater. Shinkai’s exquisite attention to detail highlights well-known Tokyo landmarks, people walking on streets knee deep in water, and luminous bands of sunlight bathed in ambient colors. While the film is a fantasy that soars to realms beyond the reach of our earthbound senses, Shinkai also underscores the film’s relevance to the issue of climate change.

“I want people to feel,” he asserts, “as if this is something taking place in our world right now. It’s not a piece of fiction that has nothing to do with you and I — it’s happening here and now.” Weathering With You, however, also has its dark moments accentuated by the continued presence of ominous black clouds. These include incidents of stolen guns, prison escapes, police chases, pimps, and prostitution, not exactly family friendly. The movie begins as teenager Amano Hina (voiced by Nana Mori, “The Anthem of the Heart”), visiting her dying mother in the hospital, becomes obsessed with a streak of light that illuminates a Shinto shrine on the top of a nearby dilapidated building.

Praying for sunshine to end the rain, Hina runs to the shrine but is suddenly whisked to a dimension in the sky that is beyond our normal sense perception. Beautifully illuminated by Shinkai, the film tells us that it is “a deeper unknown world than the sea.” Coming back to earth, we meet Morishima Hodaka (voiced by Kotaro Daigo, “Battle: Roar to Victory”) a 16-year-old runaway as he tries to survive on the streets of Tokyo after barely escaping drowning during a ferry ride into Tokyo. Lacking street smarts, Hodaka is lonely and frightened until he finds a job working for Keisuke Suga (voiced by Shun Oguri, “Diner”), the man who saved him on the ship.

Suga gives him room and board in exchange for doing research into sensational stories for his magazine. Hodaka’s first assignment is to interview people who claim to be able to stop the rain. He is drawn to Hina’s apartment where she lives with her little brother Nagisi (voiced by Sakura Kiryu, “Love’s Stoppage Time”) and together they develop a scheme to monetize Hina’s talent. Setting up a website, they appeal to potential customers who need sunny weather for weddings, birthday parties, and other specific events in their lives.

Sadly, however, Hina finds out that the legendary “weather maiden” loses power each time she affects the weather and must eventually sacrifice herself for the common good. Hodaka, who has fallen deeply in love with Hina, however, has other thoughts and the film raises the issue of the conflict between the needs of the individual versus that of society, incongruously suggesting that teenage love may be worth the sacrifice of the planet. While Weathering With You suggests that humans can control the climate, the film ultimately lacks a coherent message.

An elderly woman tells Hodaka that, thousands of years ago, Tokyo was just a bay filled with water and that what we are seeing today is just nature moving through its fluctuating periods that far outstretch the lives of humans. Shinkai says, “Humans can’t control the weather.” “At the same time,” he muses, “that’s not quite right either, as humans have definitely changed the weather. I don’t come to a clear conclusion on this but the issue definitely lies at the heart of the film.” In other words, Shinkai basically wants you to be entertained, and if you want to take away a message from the experience, there are plenty to choose from. 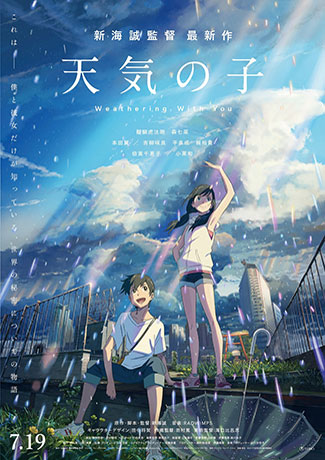