The benefit of foreign cinema is that they tend to tell stories that shed a light on their own culture and tell stories a U.S. production would probably warp and bend into something more palatable for our sensibilities, losing that bit of cultural spark that elevated the material in the first place. The drawback is that the general masses don’t go out of their way to see these, especially when releases are limited. I imagine these same people are the types to complain that “no original, good movies come out anymore” or “they’re running out of ideas.” Not to condescend, but I run into this all too often.

Your Name. is the latest project from the very multifaceted Makoto Shinkai, who you may know as the man behind “The Garden of Words,” an excellent, if not short endeavor. The film follows Mitsuha (voice of Mone Kamishiraishi), a young girl living in the country, bored with her humble surroundings. She wishes she was a boy living in Tokyo, somewhere exciting, more hustle and bustle than the repetitive bumpkin lifestyle. One day that wish comes true, and she wakes up as a boy in Tokyo named Taki (voice of Ryûnosuke Kamiki). Turns out she and Taki occasionally swap places when they wake up, and influence each other’s lives and communicate through journal entries and notes in their phones.

So at it’s core, Your Name. is a body-swap film. Not uncommon, but execution is everything. The way this film goes from slice of life to drama as it progresses is surprisingly adept. It gets the easy jokes out of the way immediately and instead focuses on the intimacy between the two leads, and the bond that grows with a change this dramatic to their lifestyles. What would have easily turned into a farce we’ve seen a million and one times ends up being a heartwarming insight into human connection. Less “Freaky Friday,” more “Eternal Sunshine of the Spotless Mind.”

The animation is spectacular, as you’d come to expect with any Japanese animation worth its weight. I even had a friend tell me he almost mistook a few of the city-wide shots for live-action footage. CGI is sparse, mostly for cars, and it doesn’t clash with the established style. This is where I see the comparisons to Hayao Miyazaki, especially for those unfamiliar with Japanese productions outside of larger films like this. I find this far more focused than Miyazaki’s work, which he himself has admitted are mostly haphazard streams of consciousness. Style and substance go hand-in-hand, rather than the former turning a blind eye to the latter.

It’s not a challenging film, but it is a touching one. Sentimentality is a balancing act and it never falls into melodrama, it’s confident in its premise and takes full advantage of the tools given by it. My only worry is that the publicity surrounding this can hurt those susceptible to hype backlash. You know how the Average Joe acts when you blurt into his ear too much about something that he would’ve otherwise enjoyed had he not been overexposed to it and grew tired of the hype. I usually chock it up to a ridiculous hang-up, but I encounter it more often than I’d like, especially with the aforementioned Miyazaki comparisons.

Your Name. is a beautiful film, and a great time. The kind of project that reminds you of the legitimacy of the medium, through and through. It’s also highly accessible, as the English cast are among the strongest in the underappreciated dubbing industry. Having seen the film in both languages, I can recommend either one. No one will judge you for avoiding subtitles. Probably. 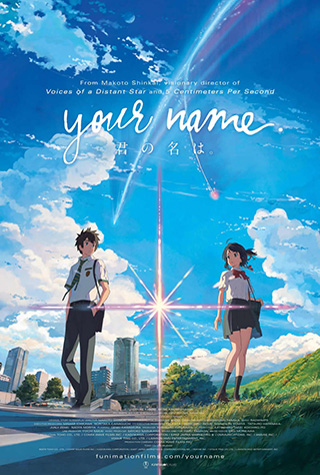